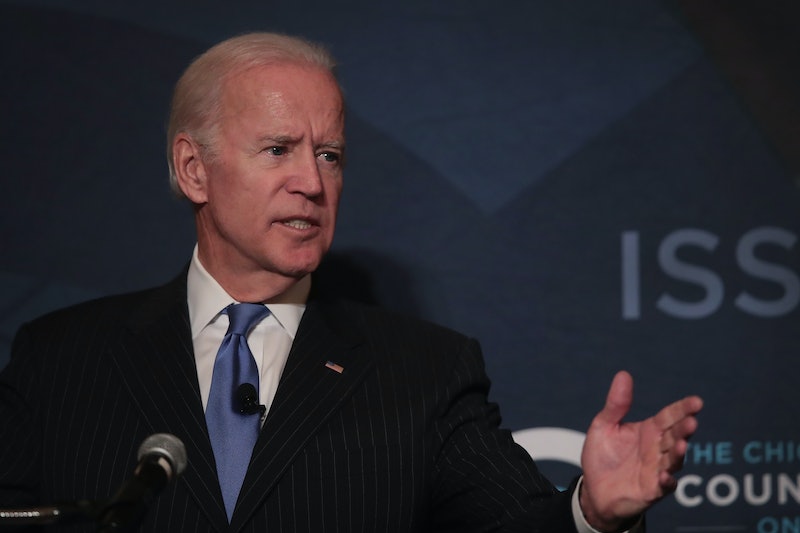 Because the former vice president remembers the last time a Supreme Court nominee was publicly accused of sexual misconduct, he wants Congress' response to be different this time around. Joe Biden discussed Christine Blasey Ford and Anita Hill on Monday when he took a stronger stance in support of survivors than he did in 1991.

"For a woman to come forward in the glaring lights of focus, nationally, you’ve got to start off with the presumption that at least the essence of what she’s talking about is real, whether or not she forgets facts, whether or not it’s been made worse or better over time," Biden told reporters during a reception at the Irish ambassador's residence, the Washington Post reports. "But nobody fails to understand that this is like jumping into a cauldron."

Ford didn't want the public to know she was the person who wrote to a senior Democratic lawmaker alleging Judge Brett Kavanaugh attempted to rape her when they were both in high school, but she spoke to the Washington Post after it became clear that she would be outed regardless. Kavanaugh said in a statement released by the White House on Friday that he "categorically and unequivocally" denies Ford's claim, but both Ford and Kavanaugh are scheduled to testify before the Senate Judiciary Committee on Monday. "I did not do this back in high school or at any time," Kavanaugh said in his statement.

Ford's allegation inevitably drew comparisons to the one Hill made regarding Clarence Thomas when he was nominated to the Supreme Court more than two decades ago. Hill testified that Thomas had sexually harassed her while he worked as her boss at the Department of Education and the Equal Employment Opportunity Commission. Thomas denied her claims.

"What unfolded during the Thomas confirmation was ugly and, after a brutal attack on Hill's motives and credibility by the Republicans, Thomas was confirmed by the Senate on a narrow 52-48 vote," David Brock, a political consultant who said he worked "inside the Republican attack machine at that time," wrote for NBC News.

At the time, Biden was chair of the Senate Judiciary Committee and presided over Thomas' confirmation hearings. Biden allowed the all-male group of senators to ask Hill personal questions, allowed Thomas to testify both before and after Hill, and prohibited testimony from three other women, as the Huffington Post notes.

Biden apologized to Hill last year, saying he wished he "had been able to do more" for Thomas' accuser. "My one regret is that I wasn’t able to tone down the attacks on her by some of my Republican friends," Biden told Teen Vogue.

Today, Biden has taken a much stronger stance in support of Ford and confirmed that he believes both Ford and Hill's allegations.

"Oh, I thought she was telling the truth at the beginning," Biden said of Hill's accusations on Monday, per the Washington Post. "I really did."

The former VP called for the Senate to delay Kavanaugh's confirmation vote in a statement issued through his spokesperson on Monday. "Vice President Joe Biden believes Professor Ford deserves a fair and respectful hearing of her allegations, and that the Committee should undertake a thorough and non-partisan effort to get to the truth, wherever it leads," his spokesperson told CNN.

Thomas' confirmation hearing can't be redone, but Kavanaugh's is still in the works. Biden's comment that the Senate should assume all women are telling the truth from the beginning shows that he wants the Judiciary Committee to take Ford's claims more seriously than Hills were 27 years ago.