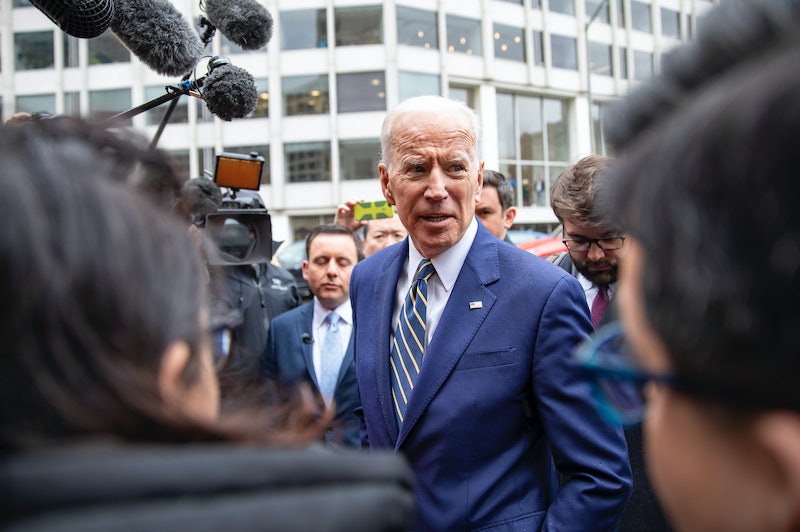 During his first public appearance since several women said that he made inappropriate physical contact with them, former Vice President Joe Biden joked about hugging before going on to denounce economic inequality and Donald Trump's presidency, The New York Times reported. Biden made these jokes about having permission to hug a woman and a young boy at the International Brotherhood of Electrical Workers conference Friday.

When he first took the stage on Friday, Biden hugged Lonnie Stephenson, the union's president, and then prompted laughter after telling the crowd that he had Stephenson's consent. “I just want you to know, I had permission to hug Lonnie," Biden said, per the Associated Press.

Then, as he was delivering his remarks, Biden invited several children onto the stage and put his arm around one of them.

“By the way, he gave me permission to touch him,” Biden said, once again drawing laughter from what The New York Times described as the largely male crowd. “Everyone knows I like kids more than people."

Bustle has reached out to Biden's office for comment. According to The New York Times, multiple women have said in the past week that Biden had touched them in ways that made them uncomfortable. And though Biden has said that he will "listen respectfully," per the Times, he has denied that his past behavior was inappropriate. He also said in a video statement earlier this week that he acknowledged the accounts from women about how his behavior made them feel and that he would be "more mindful" of people's personal space.

But Biden's jokes about hugging with consent on Friday quickly drew criticism on social media. Feminist writer Jessica Valenti argued on Twitter that Biden's decision to crack jokes about consent made it more difficult for women to openly discuss the "indignities we face" without being "accused of overreacting."

Valenti is not the only one who feels this way, either. Former Nevada lawmaker Lucy Flores — one of the women who said that Biden gave her an inappropriate kiss — also expressed concern that the former vice president isn't taking the accusations against him seriously.

"It’s clear Mr. Biden hasn’t reflected at all on how his inappropriate and unsolicited touching made women feel uncomfortable," Flores tweeted. "To make light of something as serious as consent degrades the conversation women everywhere are courageously trying to have."

Following his Friday remarks, Biden told reporters that it had never been his intention to make anyone feel uncomfortable, noting that he was "not sorry for my intentions" or for "anything I've ever done." But But Biden also said that his intentions weren't as important as the impact his actions have had, NPR reported.

"I literally think it is upon me, and I think everybody else, to make sure if you embrace someone, if you touch someone, it's with their consent, regardless of your intentions, regardless if you're trying to bring solace," Biden said, per NPR. "I think it's going to have to change how I campaign."

Biden added that he is close to launching a 2020 presidential bid. The recent complaints about him, however, have resulted in increased scrutiny of his behavior in the past week.