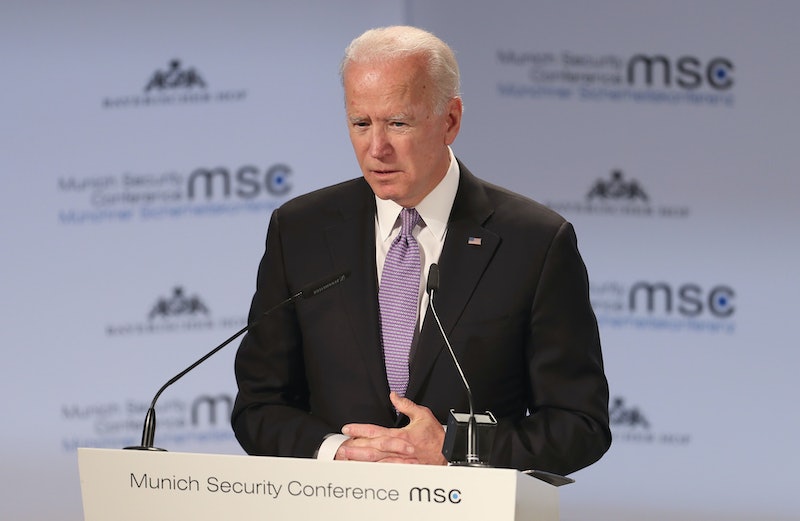 On Wednesday, former Vice President Joe Biden posted a video response to the women who, over the last week, have said that he touched them inappropriately in the past. Although he didn't apologize, Biden said in the video that social norms regarding personal space have changed, and that he will be "much more mindful" going forward.

"Social norms are changing," Biden wrote in a tweet with the video attached. "I understand that, and I’ve heard what these women are saying. Politics to me has always been about making connections, but I will be more mindful about respecting personal space in the future. That’s my responsibility and I will meet it."

In the last week, several women have said that Biden, who's widely believed to be readying a 2020 run for the presidency, touched them in ways that made them feel uncomfortable. In addition, old footage of Biden's physical interactions with women at public events has resurfaced, with some viewers believing that he appears be violating their personal space. Biden has not been accused of sexual assault at any point.

"Today, I want to talk about gestures of support and encouragement that I've made to women and some men that have made them uncomfortable," Biden said in the video. "I've always tried to make a human connection — that's my responsibility, I think. I shake hands. I hug people. I grab men and women by the shoulders and say, 'You can do this.' Whether they're women, men, young, old. It's the way I've always been. It's the way I've tried to show I care, and that I'm listening."

Biden went on to explain that he believes physical touch can be especially helpful in comforting those who've experienced grief and tragedy in their lives, as he himself has. Nevertheless, he acknowledged that norms surrounding bodily touch are changing, and that he understands this.

"Social norms have begun to change," Biden said. "They've shifted, and the boundaries protecting personal space have been reset, and I get it. I get it. I hear what they're saying. I understand it. And I'll be much more mindful. That's my responsibility."

Republicans and Democrats have been divided on Biden's behavior, and not always on party lines. His defenders include Democratic Sens. Dianne Feinstein, Chris Coons, and Joe Manchin, as well as Republican Sen. Lindsay Graham, who told NBC News' Frank Throp that Biden's conduct "may have been inappropriate but it was not driven by malice or misconduct." Republican commentator Meghan McCain has also come to Biden's defense, calling him "one of the truly decent and compassionate men in all of American politics."

But not everybody is defending Biden. Republican Sen. John Kennedy told reporters that "this is no country for creepy old men," the National Review reports, while Sen. Kirsten Gillibrand told MSNBC that some of the women Biden touched "feel demeaned and that’s not OK," and that it's "an issue he will have to address with voters."

"There’s a conversation happening in this country and it is about 'Do we value women?'" Gillibrand said. "And when we allow this space for women to come forward, to tell their truth, to tell what they’ve experienced, you not only receive them and believe them so that you can then investigate them."

In his video message, Biden said that he'll "always believe that governing, quite frankly, life, for that matter, is about connecting with people."

"That won't change," Biden said. "But I will be more mindful and respectful of people's personal space."