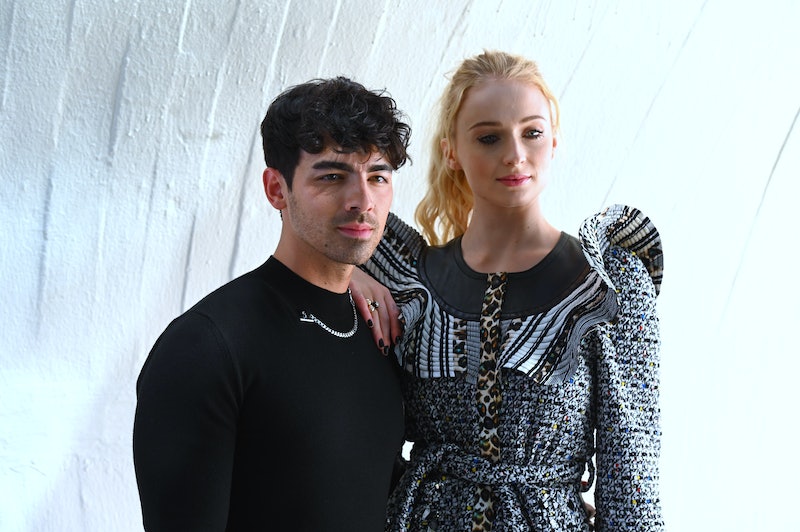 Game of Thrones Season 8 spoilers ahead. After eight years, Game of Thrones is over, and fans have plenty of thoughts. One of those fans is none other than Joe Jonas, who just happens to be married to the newly minted Queen in the North herself. Joe Jonas' reaction to Game of Thrones ending is so supportive of his wife, and also unbelievably relatable as fans adjust to a post-Westeros world.

On Twitter, Jonas posted a photo of himself staring off into the distance, apparently overcome with emotion. In his Monday afternoon tweet, the singer wrote,

"When you realize @GameOfThrones is over vibes.... Congratulations to everyone that worked on this incredible show! life changing television. I have you to thank for introducing me to the incredible @SophieT long live the QUEEN OF THE MF NORTH."

From Jonas' tweet, it looks like he was a fan of the show long before he and Turner had ever met. Jonas thanked the show for introducing his now-wife to him, and it's really too sweet. Fans might not be happy with everything that happened in the series' ending. But Jonas is clearly happy about one thing: Turner's character, Sansa, being the Queen in the North. Or, as Jonas called her, the all-caps "QUEEN OF THE MF NORTH."

Fans were touched by Jonas' moving tribute to his wife and her character, too. "Your love of the show brought you the love of your life," Twitter user @KevinJsAngels wrote, along with two crying emoji and a fitting GIF.

Another fan, @valxntina declared Jonas the "new King in the North," and a number of other fans seemed to think the same thing.

Now that the show is officially over, Turner and Jonas are likely in full wedding-planning mode. Legally, the two of them are already married — Jonas and Turner got married in Las Vegas three weeks ago, with an Elvis impersonator serving as the officiant. But their bigger wedding ceremony will still be held in France this summer.

A source explained to People earlier this month that since neither of them lives in France, Turner and Jonas had to get married in the United States to make their marriage legally binding. And their larger wedding celebration will have a Game of Thrones connection, too. Maisie Williams will be Turner's maid of honor, making her one of two people taking on the lead bridesmaid role. Presumably, Turner's sisters-in-law, Priyanka Chopra and Danielle Jonas, will also be by her side as bridesmaids at the France ceremony.

Jonas' latest tweet shows just how much he loves his wife, and how excited he is for the rest of their lives together. Sansa might not rule all of Westeros, but she is the Queen in the North, which might even be better. And in real life, she's the queen of Jonas' heart.