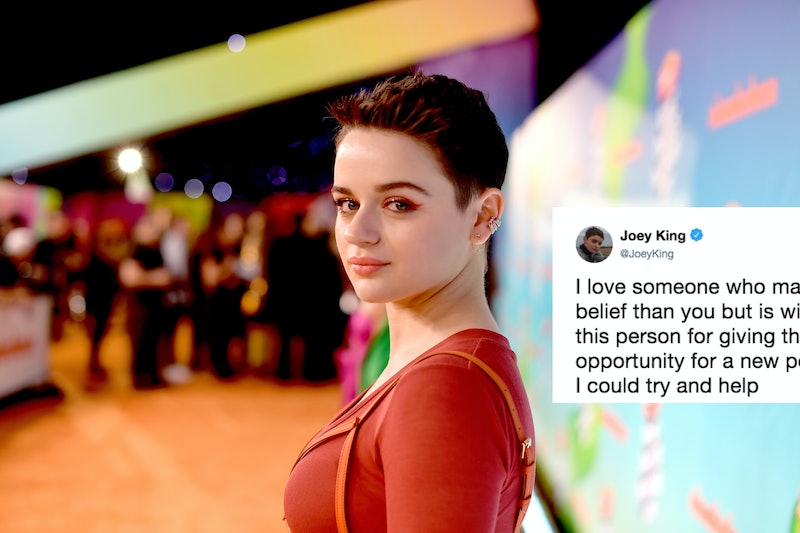 By now you've most likely heard that there's some pretty heavy stuff going on in regards to a woman's right to choose. There's been a ton of outrage about the bill that Alabama recently passed, in particular, and it's provoked a lot of heated discussions. Joey King's tweet about the abortion ban, however, shows how to have a productive conversation with someone that has a different opinion than you. She emphasized how to respectfully share knowledge and perspective, which is something we could all benefit from practicing — no matter the issue at hand.

On May 15, Governor Kay Ivey of Alabama signed a bill into law that could punish doctors who perform abortions with a sentence of life in prison. It's extremely restrictive, and would even prevent victims of rape and incest from terminating an unwanted pregnancy. Many celebrities have voiced their outrage over the controversial law, including King, who recently posted about it on both Twitter and Instagram.

Shortly after the news was announced, King shared a graphic on her Instagram Story that read, "Abortion is a personal decision, not a legal debate." This seemingly prompted a fan to ask the actor to elaborate on her opinion, and King then screenshotted and shared their DM conversation.

Basically, the fan asked King to explain how she felt like someone could "separate the child's right to a personal decision," and whether or not she thought an unborn child would hypothetically choose to die if it had been born as the result of a rape. The way in which the fan presented their question was relatively straightforward and devoid of criticism, and prompted King to respond in an equally respective manner.

"Thank you for not attacking me and thank you for asking a question," the actor began. She then went on to address the issue the fan had raised from her personal perspective, and added, "I hope this help and I hope you can get some insight from this," at the end.

Along with the screenshots posted of their conversation, The Act star wrote on Twitter, "I love someone who may have a different belief than you but is willing to learn. I thank this person for giving themselves and opportunity for a new point of view. Im happy I could try and help."

Regardless of where you stand on the issue of abortion — or any divisive issue, for that matter — the interaction between King and the person who messaged her is a great example of how to engage in civil, meaningful dialogue with someone you don't agree with. They both spoke their minds in a clear and calm way. They didn't attack the other person. They didn't accuse each other of being wrong for their beliefs — it was more so about education and trying to understand a different perspective.

So, the next time you're confronted by someone with a different opinion, keep King and her fan's conversation in mind. Nobody knows every single thing, and everybody wins when knowledge is shared.