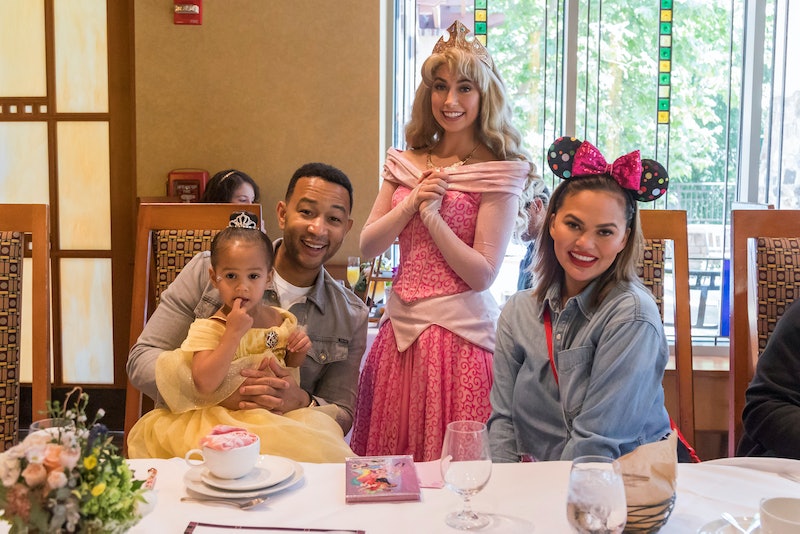 "John Legend is a good singer" is a statement that a lot of people would likely agree with. Many would even go as far to say that it's just a fact, Legend, a multiple-time Grammy Award winner, is a good singer. But not Legend's daughter. Turns out, the three-year-old is one honest, but tough critic. (Let's assume she gets it from her mama Chrissy Teigen.) Now, Legend daughter Luna is still skeptical that he's a good singer, but, unfortunately, it's not going all that well.

Before taking the stage at Sesame Street Workshop's 50th Anniversary Benefit Gala in New York City on Wednesday, May 29, Legend told Entertainment Tonight that Luna isn't a fan of his voice, but he's working hard to change her mind. "Maybe I can prove to Luna that I'm a good singer," he joked about his Sesame Street performance hopefully *crosses fingers* being a game changer. He added, "She's skeptical still." Oh, kids, they really do say the darnedest things that their parents have to continuously joke about to keep themselves from crying.

It's possible Legend might need to enlist the help of Big Bird if he wants to make any headway with Luna. On the red carpet, Teigen told ET that Luna was "so happy" to meet the big yellow guy when he filmed an episode of Lip Sync Battle airing tonight (May 30). On it, Big Bird performed the Black Eyed Peas "I Gotta Feeling" with Elmo as Fergie, which, as the clip below shows, made Luna lose her mind. "We had never seen her that excited in our lives, and she was ... so, so happy," Teigen said. "Never been more thrilled," Legend added.

Big Bird isn't the only celebrity Luna loves. On May 23, Legend tweeted a choice quote from Luna about how her dad was far less talented than a certain pop star. "Luna's QOTD," Legend wrote, "'@ArianaGrande is a great singer, Dad. You are not a great singer.'"

Clearly, Luna's not afraid to share her opinions. It's almost as if this kid is taking a page from Simon Cowell's American Idol playbook, which must hurt even more knowing the Teigen-Legends are a Voice family. Legend, a coach on the reality show, recently won the reality series thanks to Season 16 winner Maelyn Jarmon who just took home the prize. If Legend ever does need some help on The Voice, he may want to get Luna's opinion coaching aspiring singers.

Luckily, Legend seems to be taking all of Luna's harsh critiques in stride. Perhaps because Luna's never been a fan of her dad's singing voice and has never been one to keep that fact to herself.

Last year, in July of 2018, Teigen shared a video of a two-year-old Luna screaming "no" as Legend warmed up his voice, which is heartbreakingly hilarious.

Still, through all the insults, Legend continues to sing for Luna. He even created a now famous diaper changing song about her "stinky booty" that she has yet to comment on. Let's assume that when Luna finally does her take will be hot and rather insulting to her dad.

More like this
Snoop Dogg & Michelle Pfeiffer Lead Moving Tributes To Coolio
By El Hunt
Everything To Know About Taylor Swift’s 10th Studio Album, 'Midnights'
By Grace Wehniainen and Jake Viswanath
Dan Levy Appears In The Latest Teaser For The Weeknd's HBO Series, 'The Idol'
By Jake Viswanath
Beyoncé’s Special Tribute To Sister Solange Was Both Touching & Hilarious
By Stephanie Topacio Long
Get Even More From Bustle — Sign Up For The Newsletter