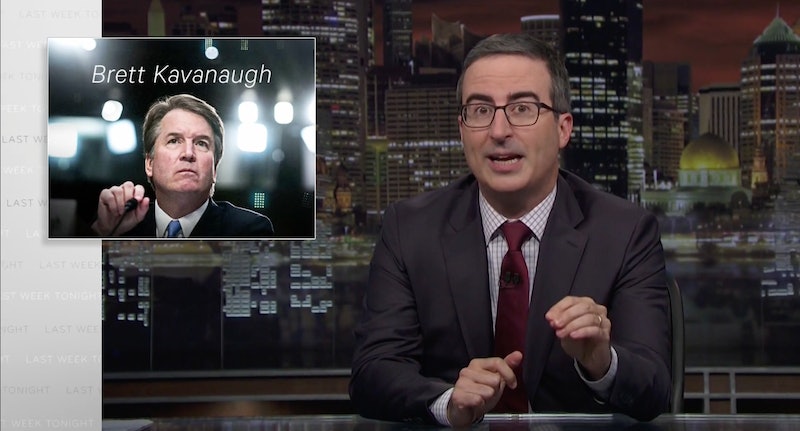 Brett Kavanaugh has been under fire from late night hosts since the news of sexual assault allegations began — but none have highlighted issues in the debate quite like John Oliver. Just hours after a second Kavanaugh accuser came forward on Sunday night, Last Week Tonight's John Oliver took down Kavanaugh's defense — and brought forward some video footage of the federal judge.

Oliver started the segment by going over exactly what Dr. Christine Blasey Ford alleges happened at a party when she and the SCOTUS nominee were in high school. Oliver read her words in which Ford says Kavanaugh "pinned her down, groped her, attempted to pull off her bathing suit and the clothing she wore over it, and put his hand over her mouth when she tried to scream."

Kavanaugh vehemently denies the allegations and Bustle has reached out for comment.

Oliver apologized for using such language on the show. "I know that that is graphic, but the details of these terrible allegations are really important, and they cast a chilling life on past comments that he has made about his time in high school," Oliver said.

Oliver played some old footage that, in the context of the sexual assault accusations, does not look good for Kavanaugh. At Columbus School of Law in 2015, Kavanaugh told the audience, "What happens at Georgetown Prep stays at Georgetown Prep. That’s been a good thing for all of us."

Oliver acknowledged that the slogan makes anything creepy — and even joked that if you saw such a sign at your dentist's office, "there's no way," you would let him give you anesthesia. Oliver went on to argue the same should apply for Supreme Court justices — especially ones with "resting lacrosse face."

Then Oliver played some other cable news footage that has been circulating as a defense of Kavanaugh. He played footage of Fox News' Jeanine Pirro talking about "demon rats" instead of "Democrats" — and played footage showing that this is something the cable host has been trying to start for months. "Jeanine: Stop trying to make 'demon rats' happen," Oliver joked.

Then Oliver played CNN footage from the group of GOP women (some of whom were actually operatives for the party) who made excuses for Kavanaugh on camera, with one saying, "Tell me what boy hasn’t done this in high school?"

Oliver said that was an awful message for young people. "That is a terrible thing for any high school girl to hear — and perhaps an even worse thing for a high school boy to hear, because she’s acting like assault is a natural consequence of puberty," Oliver said.

"Oh, don't worry if your voice cracks, you grow hair in weird places, and you start sexually attacking people," Oliver continued sarcastically. "It's all perfectly normal."

Oliver also explored President Donald Trump's responses to the allegations, which was controlled until Trump tweeted about Ford on Friday. "I have no doubt that, if the attack on Dr. Ford was as bad as she says, charges would have been immediately filed with local Law Enforcement Authorities by either her or her loving parents," Trump tweeted. "I ask that she bring those filings forward so that we can learn date, time, and place!"

Oliver was shocked. "So the president cast doubt on someone who says she was sexually assaulted, while also sort of implying that her parents don’t love her. To borrow a phrase, that’s one of the most sh*t-headed things I’ve seen from the standpoint of sh*t-headedness," Oliver told his audience.

"To be very clear, there are many reasons why victims don’t file charges with the police, including fear, humiliation, and the suspicion that no one will believe them," he added. "This is a conversation that we’ve been having for decades, and some people still seem to be struggling to understand this. It's not even like this is a first time an accuser has been attacked during a Supreme Court confirmation."

Oliver said that he hopes the hearings this week will be an improvement from the treatment given to Anita Hill in the 1990s during Clarence Thomas' confirmation hearings. "For what we've seen so far, from victim-blaming and outright character assassination, it could well be a sad litmus test for where we are as a society," Oliver said.

Ford is set to talk to the Senate Judiciary Committee on Thursday.