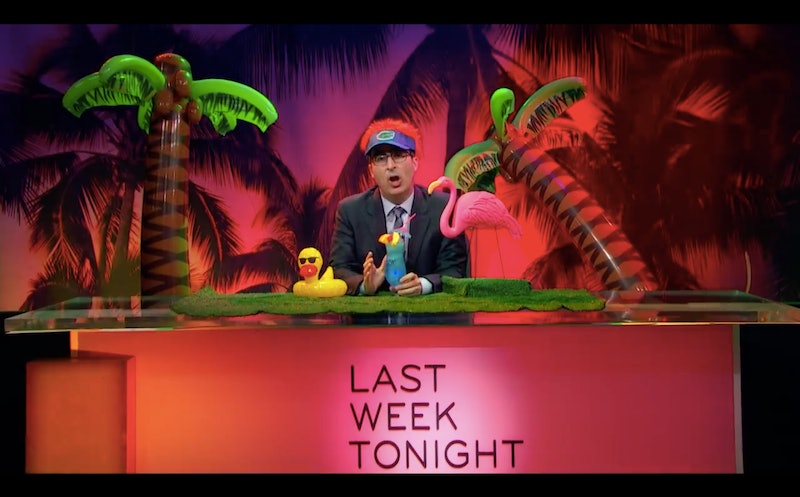 On the most recent episode of Last Week Tonight, the show's host tackled the issue of felony disenfranchisement, the notion that prohibits convicted felons from voting in elections. The host pointedly noted that felony disenfranchisement is particularly problematic in the Sunshine State. As a result, John Oliver pleaded with Florida to reinstate felons' voting rights, delivering a genuine yet hilarious message to all Floridians.

The late-night host opened his segment by noting that over 6 million Americans around the United States are prohibited from voting due to felony disenfranchisement laws. Oliver noted that many of those affected by felony disenfranchisement laws are individuals who have already served a prison sentence, yet are still prohibited from voting even after they are released.

As Oliver revealed, this issue is especially problematic in the state of Florida. Many other states have laws that automatically return voting rights to convicted felons after a certain period of time; however, in Florida, this is not the case. As Oliver described, around 10 percent of adult citizens in Florida have completed sentences for felony convictions, but are still not allowed to vote. The comedian also pointed out that this issue vastly disproportionately affects African-Americans, as "given the inequities of our justice system," in Florida "over one in five black adults can't vote."

Oliver pointed out that felony disenfranchisement is so pervasive in Florida because the state's constitution does not allow convicted felons to have voting rights. The document does permit Florida's governor to reinstate these rights, but the process for doing so is exceedingly difficult.

As Oliver noted, Florida's current governor, Rick Scott, mandated that convicted felons wait five to seven years before even seeking to restore their rights — and then required that they apply to argue their case in person in front of a clemency board. Oliver played clips from some of these clemency board hearings and argued that decisions about whether to restore voting rights are completely arbitrary. Moreover, as Oliver pointed out, even if the clemency board process constituted an ideal way of restoring felons' voting rights, the fact that it only meets four times per year is insufficient to address the amount of voting rights restoration cases in the state.

Oliver then asserted that there could soon be newfound hope for convicted felons in Florida. In November's midterm elections, a provision is on the ballot that would amend Florida's constitution to allow people with felony convictions (except those with convictions for murder or sex crimes) to have their voting rights automatically restored after completing their sentences. If it passes, this amendment could restore the right to vote to around 1.4 million people. However, as Oliver noted, Florida voters have to pass the amendment with a 60 percent majority.

As a result, Oliver then launched a direct appeal to the people of Florida, transforming his set into a Florida-like paradise, complete with (inflatable) palm trees, artificial turf, a flamingo statue, and a tropical drink. He then acknowledged that his show tends to make fun of Florida from time to time "because of all the stupid things that happen where you live." The host also noted that he now wants to "double down and suggest that it's precisely because of all that glorious stupidity that you should appreciate the value of second chances."

The comedian then went on to cite some of Florida's more ridiculous news stories to highlight his point. "I mean come on, Florida, you're Florida!" Oliver exclaimed. "A state that's seen the headlines, ... 'Florida bestiality law does not ban oral sex with animals' and 'Florida gas station robbed, suspect appeared to have drawn-on beard.'"

The late-night host asserted that it was up to Floridians to make a difference for their fellow citizens in November. As Oliver put it:

This November, Florida, you have got a real chance to remedy a mistake and do something genuinely good for over a million of your citizens. So, please, on Nov. 6, for one day, just one day, don’t take your goat for a walk in your underwear, stay away from any bitey otters, draw a fake beard on yourself, and go cast a vote for all your fellow Floridians who are unable to.

Time will tell whether Oliver's personalized message for Floridians resonated — and whether voters will choose to support the new constitutional amendment restoring felons' voting rights. If the amendment does indeed pass, it could certainly have widespread implications, both for felons whose rights would be restored and for the United States' national elections, in which Florida often plays a crucial swing state role.