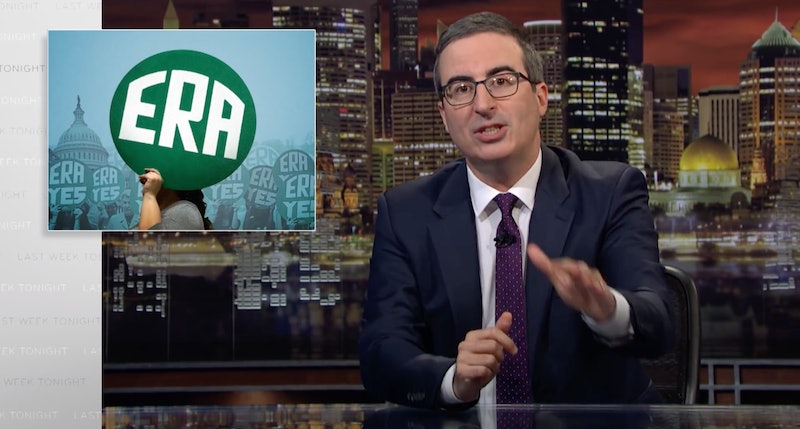 Women haven't had it easy in America lately, HBO's top British late night host argued on Sunday's Last Week Tonight. Noting the abortion bans, a "Supreme Court justice with resting beer face," and a "president who thinks of their genitals as handles," John Oliver explored the Equal Rights Amendment (ERA) and why 13 states haven't ratified it yet — even though the amendment sailed through the Senate back in 1972.

Oliver said that the amendment has been in the works since 1923, and that at the core of it there are just 24 words: "Equality of rights under the law shall not be denied or abridged by the United States or by any state on account of sex." After explaining exactly what the ERA says, Oliver pointed out that some advocates argue that 80 percent of Americans already think the protection based on sex is already in the Constitution.

"It’s one of those things that’s so obvious that you think you already have it," Oliver added, comparing the ERA to baking soda — something you never buy in the grocery store because it's a "staple" and you assume it's already in the pantry. "And you get home and you're baking a cake, and you reach in the cupboard for baking soda, and you realize, 'F*ck, women still aren't guaranteed equal rights under the Constitution,'" Oliver said.

Oliver said that at one point the amendment seemed sure to be added to the Constitution. Within one year in the 1970s, 30 states passed and ratified the text in their statehouses. But then opposition broke out, which Oliver personified in a key opponent of the ERA from the '70s: Phyllis Schlafly, an anti-ERA activist that made up many issues that the amendment would, she said, create.

Among the things she argued was that in a divorce, the children would have to be split up so that one parent got each. Oliver seemed to relish mocking this idea. "Now, if one of the children is better than the other one the Equal Rights Amendment says you have to cut off a little bit of the first one and give it to the second one," Oliver said. "Because everything’s got to be exactly equal from now on. So you’ve got to give your son his sister’s big toe. The ERA says that. It’s a fact."

The ERA, of course, does not say that, but such arguments slowed the momentum for the amendment until it missed the deadline — and then an extended one — for 38 states to ratify the act. Oliver, though, said it's not too late and pointed to bipartisan bills in both the House and the Senate that would extend the deadline or abolish it all together.

And as for other laws that promote gender equality, Oliver said that ERA would be another level of protection — since one past member of SCOTUS once said that other parts of the Constitution don't explicitly address sex or gender. "Constitutional amendments are safe from Donald Trump, unlike Melania’s hopes and dreams and any American flag he gets close to," Oliver joked.

"Equality for women should be a basic principle of our society — and if you think it already is, great! All the more reason to write it down," Oliver added. "And if you think it isn't, then we badly need the ERA."

At the end of the episode, Oliver noted the 13 states that haven't yet ratified the ERA. The minimum for it to be added to the Constitution is 38 states — and currently, 37 have. The states that haven't are: Alabama, Arizona, Arkansas, Florida, Georgia, Louisiana, Mississippi, Missouri, North Carolina, Oklahoma, South Carolina, Utah, and Virginia.

"The only real question here is, which one of you wants to seize this chance?" Oliver challenged them, adding his doubts about Alabama and Mississippi. His money, it seems, would be on Virginia.

"Plus, you’re the birthplace of Chris Brown, Rick Santorum, and Pat Robertson, so you f*cking owe America, then," Oliver added.