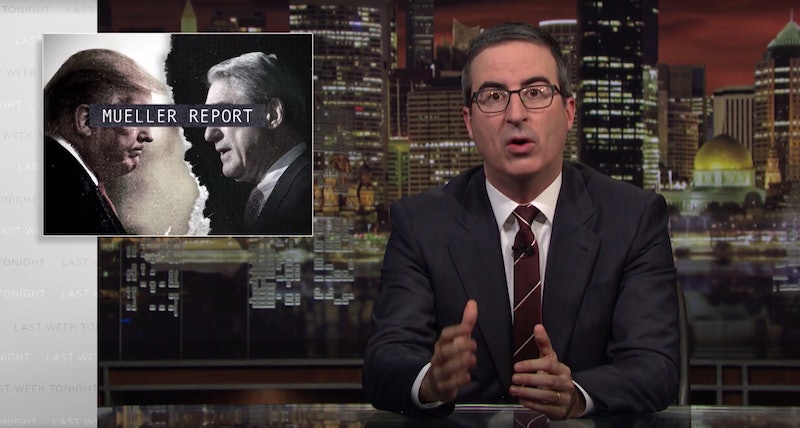 HBO's Last Week Tonight didn't shy away from the news of the week: Robert Mueller's Russia investigation report, which was released to the public with redactions on Thursday. Spending half the episode breaking down what it said for readers, John Oliver's take on the Mueller report focused on what Oliver said were two key elements that "saved" President Trump: incompetence and disobedience.

Oliver has been covering Mueller's Russia investigation since the get-go, calling it "Stupid Watergate," which this time he explained as "basically Watergate, but if Nixon had been kicked in the head by a billy goat and also if that billy goat had been the White House chief of staff."

Getting to the text, Oliver noted that the report included what he called a "pretty conspicuous non-exoneration" in reference to the quote that if the Mueller's team had confidence that the president "clearly did not commit obstruction of justice, we would so state."

Oliver acknowledged that he couldn't cover the whole report — "there's a lot in it" — and started in first on the "cartoonish levels of disorganization and incompetence." For that, he began with Michael Cohen, who as the report notes was trying to negotiate a deal for a Moscow Trump Tower during the 2016 election. Oliver highlighted when Cohen emailed a Kremlin press contact but made a mistake with the email, writing ".gof" instead of ".gov."

As for the Trump Tower meeting, when Donald Trump Jr. and others met with Russian contacts who promised dirt on Hillary Clinton, Oliver said that the Mueller report said that no one at the meeting likely understood their "conduct was unlawful," therefore shielding them from liability.

"That makes sense," Oliver said, putting a picture of Donald Trump, Jr. on the screen. "It is going to be hard that this guy had general knowledge that his conduct could be breaking the law or that he had general knowledge of anything at all — other than what it feels like to watch flags get more hugs from your dad than you'd get if you lived to be a thousand."

Oliver said that's "both reassuring and also terrifying." In what Oliver said was the most disturbing example, Trump called White House Counsel Don McGahn and "directed him to have the Special Counsel removed." McGahn refused and ultimately prepared a resignation letter in protest telling the White House that the president had asked him to "crazy sh*t."

"But the worrying thing is, lots of those people are gone now," Oliver said somberly, referring to those who had disobeyed Trump's orders. "And a lot of the newer figures are on the same page as the president." As an example, he pointed to Attorney General William Barr. Oliver criticized his letter summarizing and "vastly downplaying" the report, as well as the "pre-emptive press conference to spin the report's contents."

Oliver called much of what Barr said the "exact opposite" of what was in Mueller's report. "It's like Barr summarized the 'Twilight' novels as 'a girl in Florida goes to third base with a wookie.' No! No! That's not what happens," Oliver said. "I'm not even sure we're reading the same underlying material."

In closing, Oliver acknowledged the report didn't find "collusion" — which is not a legal term — or a criminal conspiracy. "But, it found a lot of other stuff," Oliver said. "Having the knowledge that the Mueller report provides is infinitely better than the alternative because that knowledge can inform Congress and, crucially, voters a year and a half from now."