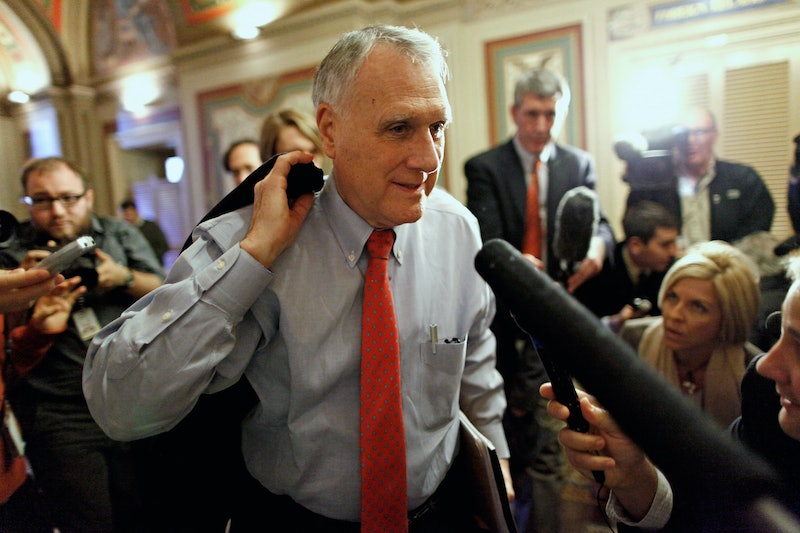 Following the Arizona senator's death after a brain cancer diagnosis, Jon Kyl will replace John McCain in the Senate, The New York Times reports. Arizona Gov. Doug Ducey is expected to announce the appointment in Phoenix on Tuesday, Sept. 4. As a former U.S. senator on the Judiciary Committee, Kyl is already very familiar with the job — and he's recently been guiding President Donald Trump’s Supreme Court nominee through the confirmation process.

"Jon Kyl is a dear friend of mine and John’s. It’s a great tribute to John that he is prepared to go back into public service to help the state of Arizona," Cindy McCain, the late senator's widow, tweeted on Tuesday.

Kyl represented Arizona in the U.S. House of Representatives from 1987 to 1995, and then in the U.S. Senate from 1994 to 2013. After announcing that he would retire at the end of his third Senate term, the Republican lawmaker began working as a lobbyist for Covington & Burling, where he was assigned to shepherd Brett Kavanaugh through his Supreme Court confirmation hearing.

Kavanaugh's hearings began the same day Kyl's appointment was announced, though The Times reports that Kyl's now expected to end his client relationship with Kavanaugh.

Kyl's role walking Kavanaugh through the confirmation process is widely referred to as "chief sherpa" and is meant to "maximize a nominee’s prospects for successfully navigating the confounding and wearisome passage through the Capitol," as Roll Call notes.

Before taking on Kavanaugh as a client, Kyl helped prepare hotelier Gordon Sondland (who donated $1 million to Trump's inaugural committee, per Politico) for a Senate Foreign Relations hearing regarding his nomination to be ambassador to the European Union. Kyl did the same for Jeff Sessions ahead of his Senate confirmation hearing regarding his U.S. attorney general appointment. Both Sondland and Sessions were confirmed to their respective positions.

But Kyl's involvement with Kavanaugh raises more questions, as the Supreme Court nominee is currently in the middle of controversial confirmation proceedings. In fact, the Senate Judiciary Committee's chairman couldn't even proceed for the first few hours of Tuesday's hearing because Democratic senators continued calling for the committee to adjourn.

Kyl's connection to Kavanaugh hints that he's likely to vote in the Supreme Court nominee's favor, creating another obstacle for Democrats attempting to block his confirmation.

The former senator was a "safe bet" for Ducey in choosing who would replace McCain because Kyl will probably obtain Trump's approval, according to The Arizona Republic. While Kyl has criticized Trump in the past, his comments focused more on Trump's personality than his political ideologies.

“I don’t like his style. I think it is boorish," Kyl told KJZZ radio of Trump in February. "I think he’s own worst enemy. He could be much more effective if he were more politique, more diplomatic — of course that’s one of the things that people like about him — the fact that he isn’t that way. But I think there’s a happy medium.”

Kyl could remain in the Senate until Arizona holds a special election to permanently fill McCain's seat in 2020, but The Times reports that he doesn't plan to run for election when that time comes.