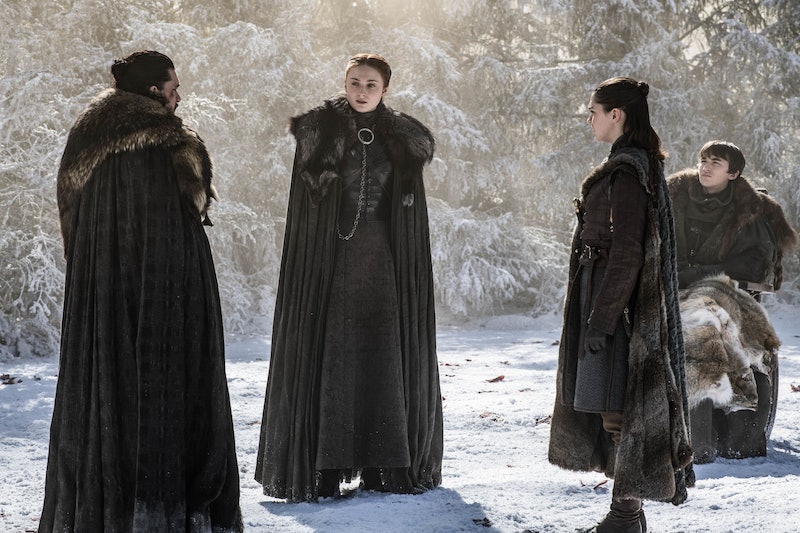 Spoilers ahead for Game of Thrones Season 8, Episode 4. Since Daenerys arrived at Winterfell in the season premiere, there's been obvious tension between Sansa and the Dragon Queen. And although it was already awkward that Jon was boinking Dany, both Arya and Sansa learned about Jon's parents in the May 5 Game of Thrones episode, which further complicated things between House Stark and Targaryen. And since their brother isn't a bastard at all but Aegon Targaryen, it's still unclear where that leaves their relationship.

But despite the fact that Jon told Dany he was his nephew in Episode 2, she says that she loves him. However, she soon becomes agitated, pointing out that everyone up North already views him as king. And now that she knows who Jon really is, her queenship has been called into question. But despite the fact that he doesn't want the Iron Throne, Dany points out that that hasn't stopped him before from becoming King in the North.

When he pledges to refuse his claim, she responds, "Never tell them who you really are. Swear your brother and Samwell Tarly to secrecy, and tell no one else, or it will take on a life of its own, and you won't be able to control it or what it does to people — no matter how many times you bend the knee, no matter what you swear." However, Jon returns that he needs to tell his two sisters, Sansa and Arya.

And although Dany protests, he does just that, coming clean to his sisters in the Godswood (because that's where all the Starks have their serious talks, apparently). But first, Arya and Sansa need to vent about the Mother of Dragons, who is seriously cramping their style. His youngest sister says that they don't need any allies — after all, aren't they the last of the Starks?

And when Jon tries to tell his sisters that he's really a Targaryen, they misunderstand what he's saying, reassuring him that he's as much a Stark as they are. He looks to Bran for guidance, who stares blankly into the distance before presumably filling them in on everything they've missed. And although we don't get to hear the ensuing conversation, it was bound to be spicy.

After all, Sansa already can't stand Dany. "Why her?" she asks Tyrion later. "You seem determined to dislike her," her ex-husband responds. And why shouldn't she be? Even thought Jon has a legitimate claim to the Iron Throne, Dany is hell-bent on taking it for herself. And while Sansa's brother is never one to toot his own horn, he's been a bastard his whole life. And now that he finds out he's royalty, he's just going to walk away from it — all because of some woman he's knocking boots with?

What's more, Varys is on Jon's side, and what is one dragon compared to innumerable little birds? One good thing that's come out of all this, however, is that Sansa will get to rule Winterfell while her brother is down in King's Landing with Dany. But the Stark makes a good point when she says, "I don't want Jon to go down there. The men in my family don't do well in the capital."

Furthermore, it's clear that there's already a power struggle between Dany and Jon, whether he realizes it or not. While she's the more passionate leader, he's both loved and respected by his people, while Dany's own hand, Tyrion, is afraid of her.

And while it's too soon to tell how the rest of the season will play out, there's no question which side Sansa and Arya will take, if it comes down to that. So Dany had better watch out, because while Jon may be content to be Warden of the North, the Stark women aren't going to let their brother be disrespected.