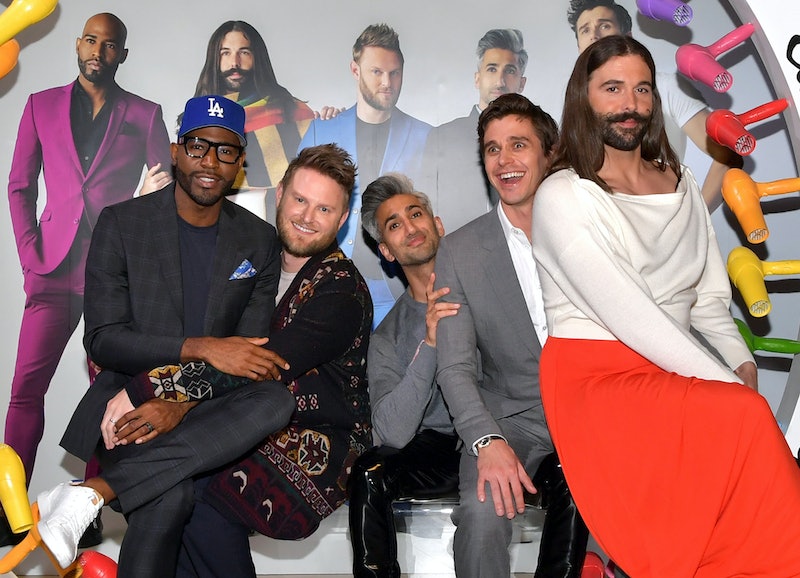 Hair today, gone tomorrow. Grooming guru Jonathan Van Ness' Gay Of Thrones farewell to Game Of Thrones was the most fab end of an era — and much less divisive than the HBO series' finale itself, of course. "Say what you will about this beloved series and how it all came to an end, but these stories that have brought us all together to just recap and chat have been some of the most fun and amazing times of my little baby gay life," the Queer Eye star said in the video, while bidding adieu to his fan favorite Funny or Die GoT recap web series.

Since Gay of Thrones premiered in 2006 (during the HBO drama's third season), JVN has chatted all things Westeros in his stylist's chair with many A-listers, including Anna Faris, Gabrielle Union, Kumail Nanjiani, and, most recently Tiffany Haddish. So it was no surprise that he got a little help from his friends for the final installment, titled "The Iron Throb." In addition to Australian comedian Celeste Barber, JVN also hatched a truly epic moment with his fellow Queer Eye Fab 5 members: Karamo Brown, Antoni Porowski, Bobby Berk, and Tan France.

The four men hilariously appeared as baby dragons inside a dragon egg. After Tan wondered how many years they'd been "stuck in this egg," Antoni estimated it could be either six or a hundred. (He'd stopped counting.) "How does Jonathan not know where we are?" Bobby asked the guys. "He has been carrying this egg around for years."

Enter Karamo with his trademark level-headed wisdom: "Don't lose hope, guys. Once Jonathan accepts he's the true Mother of Dragons, he'll sit on us. Snap, crackle, pop, and we're out of here."

Their hopes for life on the outside? Antoni "can't wait" to "be free to wear all the simple elegant tees" he can get his hands on. But rather than recommend his trademark French tuck, Tan suggested his castmate go for something more like a "King's Landing tuck" instead.

For his part, Bobby admitted he wouldn't be so anxious to leave if he could just get some nice cotton Peruvian pillows. And don't even get him started on the cement tiles he could put everywhere to really spruce up the egg's interior.

But, alas, JVN discovered the whereabouts of his friends — and delivers one of the episode's best lines in the process. "There's my little baby dragons!" he says. "Don't worry, I'll get you guys out of there faster than an angry GoT fan rushes to Twitter." (Too soon?)

According to The Hollywood Reporter, Gay of Thrones was actually inspired by real-life conversations JVN had with his client, Funny or Die writer and director Erin Gibson, during her styling sessions at his L.A. salon — long before he made his Queer Eye debut on Netflix in 2018.

"When Jonathan was talking about Game of Thrones while he was doing my fringe, I was like, 'This is funny, this is fresh, this is a point of view that no one's going to have on this show,'" Gibson, who pitched the show in 2013, recently told THR.

He also joked to THR that he credits Gay of Thrones for his foray into the entertainment industry. "I like to say [Gibson] is like the Usher to my Justin Bieber," he joked. "I have always loved to do hair and be in the salon. Being behind the chair is the place that I felt really fulfilled and really, truly happy. That was my goal, to never need to borrow money from my parents for rent and be a self-sufficient adult person."

His "chair" may not be the Iron Throne, but JVN deserves a crown, regardless.