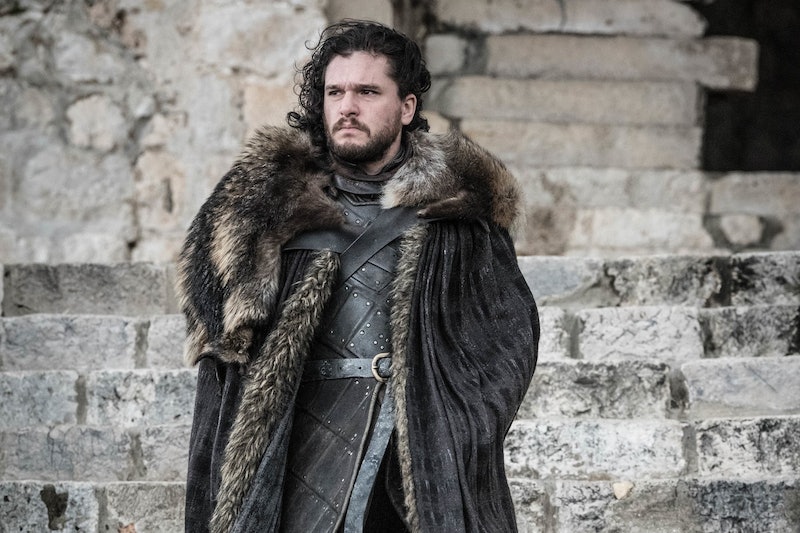 For eight seasons, Jon Snow was the most honorable man in Westeros. In a world of scheming politicians, cruel lords, and fickle gods, the bastard of Winterfell was one of the only people struggling to do the right thing. So when Jon killed Daenerys in the Game of Thrones finale, it was both a tragic moment for him as a character, and the most poignant, fitting end possible for the arc he's been on since the series premiere.

For better or worse, Jon has always been Ned Stark's son, in temperament and deed if not in actual lineage. He received his moral code from the stern Northern lord, a moral code that kept Jon one of the most purely "good" characters on the show… but also oddly one of its most inert and inflexible, dramatically. While his Stark siblings changed in dramatic ways — Arya becoming a highly trained assassin, Sansa becoming a formidable player of the game, and Bran becoming a blissed-out seer — Jon remained virtually unchanged up until the events of the finale (his Season 6 resurrection notwithstanding).

But in the end, Game of Thrones turned the most honorable man in Westeros into a Queenslayer. How does Ned Stark become Jaime Lannister? That's essentially the question posed by Jon's arc in this story, and it's a compelling question. There are hardly two figures more unlike on Thrones than Lord Eddard, man of honor, and the Kingslayer, the man who betrayed his oath. In fact, Jaime spent his life living up to his disreputable nickname in large part because Ned Stark, the first person to find Jaime with the corpse of the Mad King, immediately passed judgment on the knight and branded him an oathbreaker without bothering to hear Jaime's side of the story. Now, all these years later, to see Ned's surrogate son essentially become the new Jaime is both highly ironic and, in hindsight, was always the inevitable conclusion of Jon's arc.

In fact, Jon and Jaime had a portentous interaction very early in the series that laid the groundwork for this development. "I'm grateful to have good, strong men like you protecting us," the Kingslayer told the bastard mockingly in Season 1, Episode 2, "The Kingsroad." Little did Jaime know, many years later, that young bastard he was mocking would follow in his footsteps, plunging a knife into the stomach of the monarch he'd sworn his allegiance to in order to protect the people and save the realm.

Ultimately, Jon had to make the choice that Ned never could. In Season 1, when Ned was faced with the choice whether to immediately take action to secure the succession and thus avoid war, or to show Cersei mercy and give her advance warning so she could flee with her children, Ned chose the honorable path… and his mercy killed the king, himself, and countless others. Only after he was imprisoned for treason, with his back literally against a wall, did Ned Stark abandon his honor in order to save his daughters, agreeing to admit to treason and proclaim Joffrey as the rightful king. But, cruelly, it turned out that Ned abandoned his honor for nothing, since he wound up losing his head anyway.

Jon has occasionally taken his surrogate father's teachings to extremes. Once he learned the truth of his parentage, he immediately felt honor-bound to tell both his queen and his family — while Ned Stark managed to carry that secret for years, all the way to his grave. If honor was Ned's fatal flaw, then the lingering question when it came to his adopted son was whether it would prove to be Jon's fatal flaw as well.

Jon's sudden inability to distinguish between right and wrong isn't a weakness — it's growth.

Last week, the nihilistic penultimate episode saw several of the show's main characters succumb to their own fatal flaws and find themselves doomed for it: The Hound in his need for vengeance, Cersei in her quest for power, Jaime in his addiction to Cersei, Daenerys in her penchant for fire and blood. After that episode, I wrote that I hoped the show would find a more hopeful way to end, and allow its characters to find a way to break the wheel of their destiny and make choices that redefine their arcs.

So I was thrilled when the show subverted fan expectations and didn't have Arya go full Faceless Man and murder Daenerys. It was important for Arya to end her cycle of violence and forge a new path for herself, and I was happy to see her do just that, leaving her days as an assassin behind and literally heading off on a new adventure. I was just as happy to see Jon break his pattern of stubbornly choosing honor over sense.

Jon's decision to kill Dany was by far the most complicated choice the character has ever had to make. Killing one's queen is an undeniably dishonorable act, but saving the lives of countless innocent people is an undeniably honorable one. This is the calculus that Jaime had to weigh when he stabbed King Aerys in the back, and it's the same ethical conundrum Jon faced with Aerys' daughter in the same room so many years later.

In the scene he shared with Tyrion immediately before going to confront Daenerys in the throne room, Jon quoted a formative line from Maester Aemon. "Love is the death of duty," the old man told Jon way back in Season 1. (Remember, Aemon himself was a Targaryen heir who gave up his own claim to the throne.) But in the end, the decision wasn't a simple binary; it wasn't just a choice between love and duty. When Jon drove a dagger through Daenerys' heart, he was sacrificing his love of Dany for the sake of his duty to the people of Westeros — but he was also sacrificing his duty to his queen for the sake of his love for Sansa and Arya, who Daenerys would certainly have killed if he hadn't.

This complicated tangle of love and duty, honor and sacrifice, keep Jon's choice from feeling easy or simple. Jon continues to doubt himself, right up until the end. "Was it right, what I did?" he asks Tyrion afterwards. "It doesn't feel right." For someone whose moral compass has pointed true north for most of his life, not being sure what's right is a new feeling for Jon; he's doubted actions he's taken before, but never what was right. But his sudden inability to distinguish between right and wrong isn't a weakness — it's growth.

Someone who claims to always know what's right probably isn't more virtuous than anyone else, just more delusional. Daenerys tried to tell Jon that they could decide what was "right" — for themselves and for everyone else. But the world isn't black and white, and you have to find room for grey in order to survive. Cersei claimed that when you play the game of thrones, you either win or you die. There is no middle ground. But those are the words of a tyrant. There has to be a middle ground, or the cycle will never end.

Jon played the game of thrones, and he didn't win or die. Instead, he'll live the rest of his days in the North, a sentence that's half-exile and half-homecoming, forever unsure whether what he did was the right thing. Strict adherence to Ned's rigid honor code would have gotten himself and half the kingdom killed; but abandoning that code means he'll never feel like a hero, either. That's a fitting end for a show that was never about anything as simple as heroes and villains. Most characters on Thrones have always existed in shades of grey… and now Jon Snow does, too.

More like this
Alicent's Green Dress In 'House Of The Dragon' May Be An Act Of War
By Kadin Burnett
Nicola Coughlan Shared A Lady Whistledown Excerpt From ‘Bridgerton’ Season 3
By Grace Wehniainen, Alyssa Lapid and Sam Ramsden
The 'Andor' Timeline, Explained
By Gretchen Smail
'House of The Dragon' Episode 6 Will Take Place A Decade After Episode 5
By Kadin Burnett
Get Even More From Bustle — Sign Up For The Newsletter