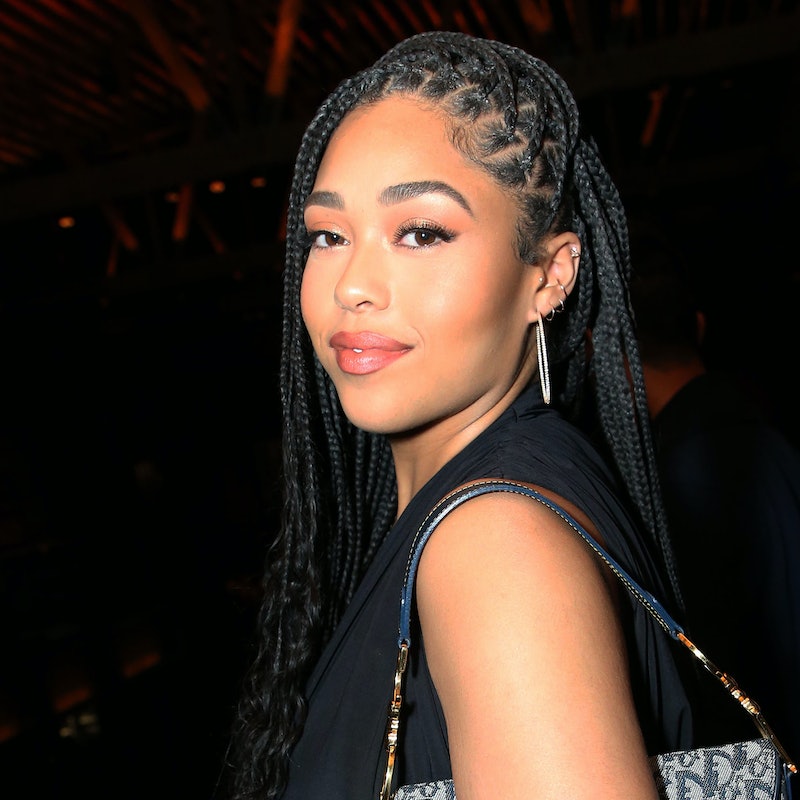 Guess who's got a new summer job. On May 29, Freeform announced that Jordyn Woods will make her acting debut on grown-ish during the second half of the college-themed black-ish spinoff's Season 2. As People exclusively revealed the same day, Woods will play Dee, a freshman at the fictional Cal U with a “sweet soul with a soft-spoken and sincere vulnerability.” Although grown-ish returns from its spring break on June 5, Woods' first episode won't air until July 24, the magazine also reported.

Woods reacted to the news in an Instagram post the same day. "I’ve been waiting to share this with you guys but I am SO excited to guest star on this season of #grownish," she captioned the photo of herself in character alongside star Trevor Jackson (Aaron) and several new faces. "This was the first role I’ve ever booked and I was nervous at first but I got past that and had the best time🙏🏽 take risks and stay consistent to your journey, you never know what the world has to offer✨"

As People also reported, Woods will "likely be sharing most of her scenes with" Jackson, given that his character, though a sophomore himself, is the RA of Hawkins Dorm. That's not to say, however, she won't also get screen time with other members of grown-ish's stellar cast, which includes: Yara Shahidi (Zoey), Francia Raisa (Ana), Emily Arlook (Nomi), Chloe Bailey (Jazz) Halle Bailey (Sky), Luka Sabbat (Luca), Diggy Simmons (Doug), and Jordan Buhat (Vivek).

In addition to a new student being added to mix, there are going to be some huge changes happening to the Cal U crew when grown-ish returns to Freeform. When viewers last saw Zoey and co. on the grown-ish mid-season finale in March, the Johnsons' golden child's dad, Dre (Anthony Anderson), had just cut her off financially, following an academic cheating scandal. And if that didn't blow up Zoey's life enough, another cliffhanger involved Aaron accidentally confessing to her that he and her roommate/BFF Ana had been hooking up behind her back (or, as Aaron explained it in a new grown-ish sneak peek, "kickin' it naked.")

While her upcoming grown-ish guest spot will be her official acting debut, it's far from being Woods first time appearing on a popular TV show. As Kylie Jenner's best friend, the 21-year-old has been on several episodes of E!'s Keeping Up with the Kardashians, as well as Jenner's spinoff, Life of Kylie.

And even if she doesn't physically appear on the second half of KUWTK's Season 16, which is currently airing, Woods will definitely be discussed. How could she not be? Back in February, Khloe Kardashian and Tristan Thompson broke up following an alleged cheating scandal between Woods and Thompson. Shortly afterward, Woods admitted on Jada Pinkett Smith's Red Table Talk, that she and Thompson kissed at a party but denied that they ever slept together.

In the KUWTK mid-season trailer, viewers hear a voice cryptically saying, "Her legs were like in between his legs," almost certainly referring to Woods and Thompson. Later in the clip, family matriarch Kris Jenner says in a voiceover, "This is going to change their relationship forever," before telling Kylie, "For you and Jordyn, it's like a divorce." Kylie's response? "She f*cked up."

Woods' soon-to-be grown-ish costar, Sabbat, also has a Kardashian connection. While neither ever officially confirmed a relationship, Sabbat reportedly dated Kourtney Kardashian for several months in 2018. By late October, however, People reported that they had split, also noting that Sabbat has been friends with Kendall Jenner and known the family for years.

Surely, Woods will be relieved to finally be part of a TV show where all of the drama is fictional. Either ways, fans will be excited to tune in to see her grown-ish debut in July.