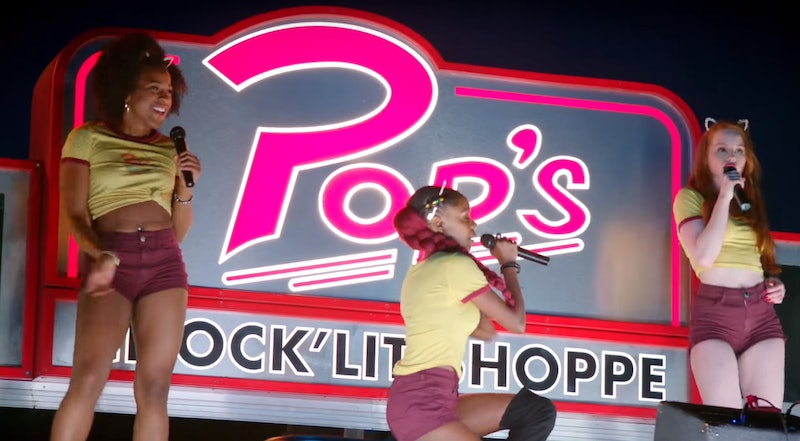 Looks like it isn't just Pop's milkshake that's bringing the teens of Riverdale to the yard, but yet another iconic Josie & The Pussycats performance. And what better way to help save the town's beloved diner following Fred Andrews' shooting than with Josie & The Pussycats' cover of "Milkshake" on the roof of the building in the latest episode of Season 2. Delivering the song with as much sweetness as you can only imagine the diner's milkshakes contain, the band's interpretation of the song is far different than the 2003 hit by Kelis — but it absolutely works. The hit is transformed from being a seductive brag into a whimsical treat. It's basically a frothy sugar rush of a song and you don't want to waste a single drop.

This cover song also proves, as if you had any doubts prior to this performance, that Josie & The Pussycats are the best fictional band on TV. Hell, they might even be the best fictional band of all time. In the first season of Riverdale, for instance, the talented trio delivered a bombastic couple of cover songs that hinted at their potential for fun re-workings of classic pop hits.

In episode six, the Pussycats covered Donna Summer's "I Feel Love," maintaining the song's original nuance for sultry drama while giving it more of a synth-noir edge. Meanwhile, in a meta throwback to the iconic 1969 song by The Archies, episode 11 featured them covering Inner Circle's 2009 song, "Candy Girl (Sugar Sugar)". It was exuberant, saccharine, and buoyantly feminine, as the River Vixens proudly showed off their school spirit.

Forgetting for a moment that Archie helped with the writing of the song (because the Pussycats deserve to claim all the credit they can take), can we also appreciate just how incredible "All For Me" is from the third episode of the first season? Though the band is phenomenal at taking existing hits and putting their own twist on them, "All For Me" is proof that those same talents are still pretty jaw-dropping when it comes to original songs, too.

The song is catchy as hell, features some powerful lyrics, and within the context of the show, also manages to provide a musical breakdown that also furthers the plot. The song gives Archie, who's grounded, a reason to sneak out of the house. And in doing so, fans are able to see the character is willing to take risks for something worthwhile, which the live performance of "All For Me" certainly was.

In the history of TV, there's barely been a fictional band quite as compelling, genuinely listenable, and exciting as The Pussycats in Riverdale. Buffy The Vampire Slayer had Dingoes Ate My Baby, but as fun as it was to see Oz on stage in the rare moments they performed at The Bronze, nobody was exactly tuning in just to see what the band did next. The only fictional TV band who can even come close to The Pussycats is Gilmore Girls' Hep Alien, whose cover versions of an eclectic back catalogue of hits (including Gwen Stefani's "Hollaback Girl" and Blondie's "Janging On The Telephone") are still a genuine delight to rewatch.

The Pussycats' cover of "Milkshake" is also exciting in how it hints at the potential for more great future cover songs. Earlier this month, for example, Riverdale actors Ashleigh Murray (Josie), Hayley Law (Valerie), and Asha Bromfield (Melody) revealed to The A.V. Club the songs they'd love for Josie & The Pussycats to cover in the show. Their wish list included such incredible picks as Destiny's Child's "Say My Name" and "Bug a Boo," though they also shared interest in delving into the back catalogues of The Spice Girls and Jill Scott.

Any of those covers would easily throw the internet into a meltdown if they came to fruition on Riverdale. Since we're only at the very beginning of Season 2, who knows what musical treats the band has in store. But if their rendition of "Milkshake" is anything to go by, then they're sure to be serving up a veritable buffet of sweet musical treats, which may even provide some light relief from what sounds likely to be a dark second season.

More like this
24 Years Ago, 'Friends' Dropped Its Most Underrated Ross & Rachel Episode
By Grace Wehniainen
Netflix Reveals First Look At Wednesday In The 'Addams Family' Spinoff Series
By Bustle Editors
Did 'Grey’s Anatomy' Just Drop A Major Taylor Swift Easter Egg?
By Grace Wehniainen
'School Of Rock' Changed Joe Keery's Life Forever
By Alyssa Lapid
Get Even More From Bustle — Sign Up For The Newsletter