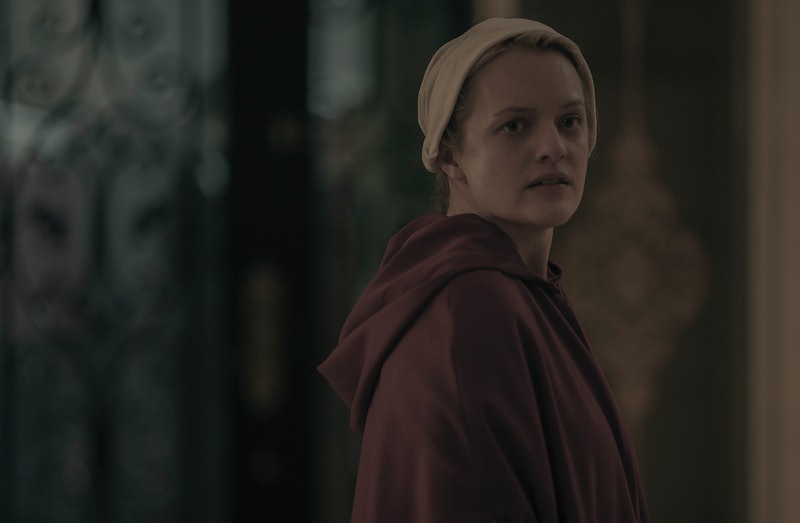 Spoilers ahead for The Handmaid's Tale Season 3, Episode 5. This season of The Handmaid's Tale, the walls between Gilead and the outside world seem more permeable than ever. Perhaps that's because the season begins with Emily and Nichole successfully crossing the border, cementing the idea that a handmaid really could escape. But this week's episode pushed the boundaries even further, re-connecting June and Luke — and the ramifications could be huge.

The episode ends with the Waterfords' televised request for Nichole's return, suggesting the interaction between Gilead and Canada won't be ending anytime soon. That's where June's recorded message becomes so important: while it's no doubt devastating for Luke to hear, it also contains some damning information about several key Gilead residents. June's message may change things between her and Luke — but it may also change things for Nichole, the Waterfords, and Nick.

Here are all the possible consequences of June sending Luke that recording.

Nichole Could Be Saved From Gilead

If the Canadian government takes the Waterfords' request seriously, then Luke will have to put up a fight to keep Nichole with him in Canada. Having a recording that claims Nichole is not Commander Waterford's biological child (assuming a DNA test confirms it) might delegitimize the Waterfords' request, and allow Nichole to stay with Luke.

June & Nick Could Be Killed

If Luke uses the tape as evidence for why Nichole should not be returned to the Waterfords — and the Waterfords become aware of the tape in the process — June and Nick will be in huge trouble. In addition to breaking scores of Gilead's rules by sleeping together, these two will have humiliated the Waterfords, who will no doubt want their revenge. Nick is currently off at war, so they might not find it worth calling him back. But Gilead allowing June to live after finding out what's on this tape would be shocking.

The Waterfords Could Be Punished

The Waterfords have now led a national quest for the return of their child. As June's walking partner reminds her all too often, the whole community is deeply invested in baby Nichole's fate — and that was before they went on TV about it. If the Canadian government becomes aware that Nichole is not the Waterfords' child, Gilead officials will likely regret getting so involved, and may punish the Waterfords for putting them in this situation.

Luke Could Have A Mental Breakdown

Luke has had an extremely emotional go of it this episode, starting with a surprise call from June after years of no contact, and ending with a recording of June telling him she fell in love and had a child with another man — one who Luke has met, even! It's unclear how this news has affected Luke, as he was shown the Waterfords' televised address seconds later, but he must be completely overwhelmed. After not hearing from June for so long, he's now bombarded with information — not to mention close encounters with the Waterfords. He's likely struggling to figure out how to process all this, especially when June is still miles away, and may never return. Whether or not Luke uses the information June gave him to protect Nichole, he'll need to grapple with it emotionally, too.

Finally: in all this, there remains the question of why June sent this particular message. Why now? Why this information? It could be that she sent it specifically fearing the Waterfords would pull a trick like this — and that she hopes Luke will use it to keep Nichole in Canada. Or, it could be that in talking to Luke on the phone, her feelings of guilt became too much to bear. She could have sent it for the reason she states in the message: she needs to believe that Luke could forgive her. So that if she does find her way out of Gilead, there will be no secrets between them, and she'll know that Luke can love her for who she is now — for who Gilead has forced her to become.

Whatever the intent, June sent that message at great personal risk to herself. Hopefully, it will have the desired effect.

More like this
Netflix Shut Down 'Bridgerton' S3 Rumours About A “Very Dark” Storyline
By Bustle
Everything To Know About The 'Daisy Jones & The Six' TV Series
By Maxine Harrison and Brad Witter
The Song At The End Of 'The Last Of Us' Ep 1 Has A Deeper Meaning
By Sophie McEvoy
Here’s What Happens To Bill & Frank In 'The Last Of Us' Video Game
By Brad Witter
Get Even More From Bustle — Sign Up For The Newsletter
From hair trends to relationship advice, our daily newsletter has everything you need to sound like a person who’s on TikTok, even if you aren’t.