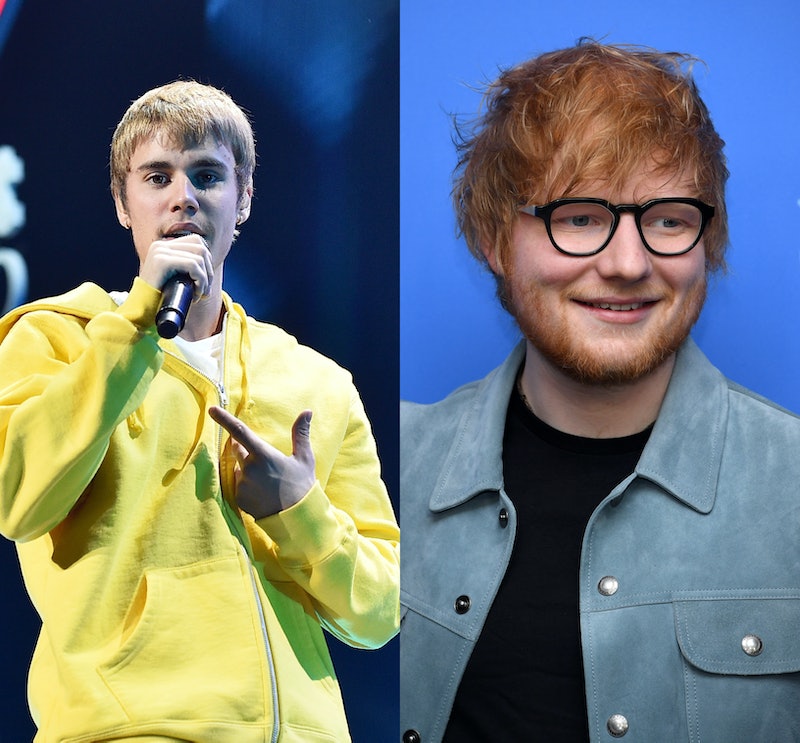 If you like the way the Biebs and the Sheerz sound that much, oh you should go and love their upcoming jam. Justin Bieber and Ed Sheeran have been teasing a new collaboration for the last few days, generously sprinkling clues about a fresh song all over social media. On Monday, Bieber really amped up the clue game when he tweeted, "Check my Instagram story. It’s happening. #friday." That same day, the pair of pop stars also unveiled what appear to be some lyrics and snippets of the new song, which fans suspect is titled "IDC."

This collab would be a very big deal; when Sheeran and Bieber join musical forces, the results are oh-so right. Sheeran co-wrote “Love Yourself,” the third single off of Bieber’s 2015 album Purpose. Sheeran also co-wrote Major Lazer’s “Cold Water,” which features MØ and Bieber on the vocals. And in, like, four days, we may get to hear what Bieber and Sheeran came up with for this ditty we call "IDC."

And by "may get to hear" I mean "will almost definitely get to hear, because jeez, the clues couldn't be more obvious." Last Tuesday, Bieber and Sheeran posted photos they took in front of a green screen along with the number 10. And with that, the countdown began.

On Monday, Bieber basically confirmed that a new song will arrive on Friday. His manager, Scooter Braun, quote-tweeted this post, adding "Idc," which may seem like a rude thing to say to one of his biggest clients... but then you remember that the new song is probably called "IDC" and all is well again.

What's that? You want us to check your Instagram Stories, Biebs? Don't mind as we do.

What have we here? A video of Sheeran playing a clip of a "nice tune"? Huh. You don't say.

Here is another small preview:

Bieber and Sheeran also shared what might be pieces of lyrics to some song that is slated to come out this Friday.

And could it be? The other half of the lyrics?

Put 'em together and what have you got? *Clears throat." Here we go:

Bieber also shared this on Monday:

As many fans pointed out, the cartoon birds in this IG Story were plucked right out of a poster for Angry Birds 2. Seems like we might have an Angry Birds 2 soundtrack song in our midst, no? Eh, maybe not. After Bieber shared that image of three Angry Birds 2 characters perched above the acronym "Idc," Braun tweeted, "It’s not for a movie lol." No, Braun did not say what is not for a movie, but uh, let's put cocka-two and two together.

Angry Birds 2 soundtrack or not, it sounds like the track currently known as "IDC" is almost here. And fans are ready to hear BiebSheer.

Speaking of the number 10, emotions are at a 10 right now.

I don't know about you, but I do care about "IDC."

More like this
Ed Sheeran’s Surprise Gig Included An Iconic Britney Spears Tribute
By Bustle Editors and Darshita Goyal
Hailey Bieber Just Responded To *That* Viral Met Gala Moment
By Radhika Menon and Sam Ramsden
Is Dua Lipa Dating Trevor Noah? New Photos Show Them Kissing & Hugging
By Brian Anthony Hernandez and Martha Sorren
Everything To Know About Taylor Swift’s 10th Studio Album, 'Midnights'
By Grace Wehniainen and Jake Viswanath
Get Even More From Bustle — Sign Up For The Newsletter