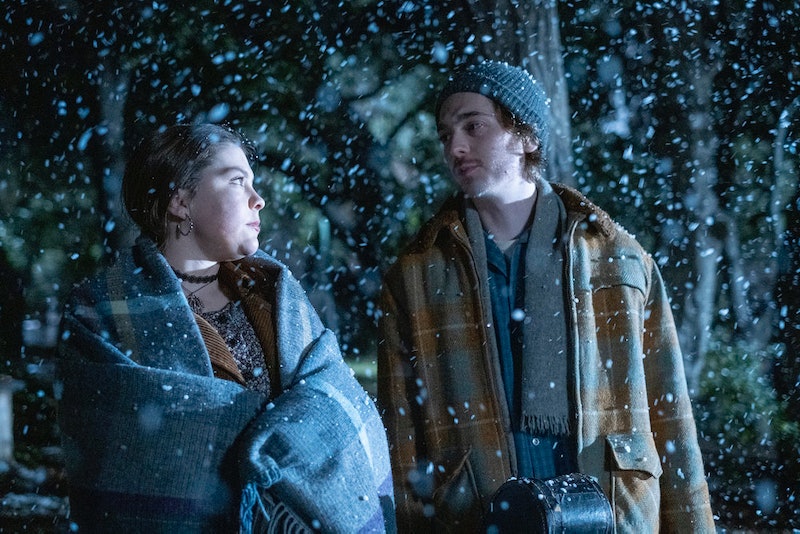 Ever since he was first introduced on This Is Us, fans have been unsure of what to make of Kate's new boyfriend Marc. He's possessive, controlling, and all around creepy, but if you thought perhaps all these red flags are just a red herring on the show's part, think again. Justin Harley shared a few details about Kate and Marc's relationship on This Is Us during a recent interview with Entertainment Tonight and hinted that Marc is at the heart of all of Kate's "pain and suffering" throughout the course of Tuesday night's episode, "A Hell of a Week: Part Three."

Marc has only appeared a handful of times throughout the course of Season 4, but his behavior toward Kate has always been worrisome. From showing up at her house uninvited to labeling himself as her boyfriend without her consent, it's clear this guy doesn't have a good grasp on boundaries. But it's a dynamic that Hartley feels many people will be able to relate to in some form or another.

"We've all been in a situation that you know you should get out of, in your heart of hearts," he told ET. "And your friends might know it and everyone's just hoping that you make the right decision but you just don't do it. That's where we find [Kate]. It's not a healthy thing and it's not good."

Though the nature behind Marc and Kate's relationship has yet to be confirmed, Hartley's remarks definitely seem to suggest that some level of abuse (whether verbal, physical, or both) may be taking place. If anything, it certainly appears to disprove a few theories, like the one that predicts Marc dies in a car accident after fighting with Kate, prompting her to blame herself for his death.

That outcome simply doesn't align with Hartley's remarks, given that it's not something that people commonly experience. An abusive relationship on the other hand is sadly all too common. In fact, according to the National Coalition Against Domestic Violence website, nearly 20 people per minute are physically abused by an intimate partner in the United States.

Could Kate ultimately prove to be among one of those numbers? Hartley wouldn't say, but he did hint that whatever happens between the young lovers will have a huge effect on Kate going forward. "You see the long-term effect of every relationship you've ever had in your life and it's like, wow, you have the choice and power to make things better for yourself," he explained. "We see her in that place."

Adding further fuel to the speculation fire, a preview clip of the episode, provided by Entertainment Weekly, shows Marc trying to control Kate's diet by body-shaming her. He also acts none too thrilled when she chimes in to correct him on something while assisting a customer. When it comes to red flags, this dude's got them in spades. And if they're ultimately proven to be true, let's hope this week will be the last we ever see of Marc from here on out.

More like this
Nicola Coughlan Shared A Lady Whistledown Excerpt From ‘Bridgerton’ Season 3
By Grace Wehniainen, Alyssa Lapid and Sam Ramsden
The 'Andor' Timeline, Explained
By Gretchen Smail
Zendaya Shares Intimate Photo With Tom Holland To Wish Him A Happy Birthday
By Bustle Editors
Alicent's Green Dress In 'House Of The Dragon' May Be An Act Of War
By Kadin Burnett
Get Even More From Bustle — Sign Up For The Newsletter