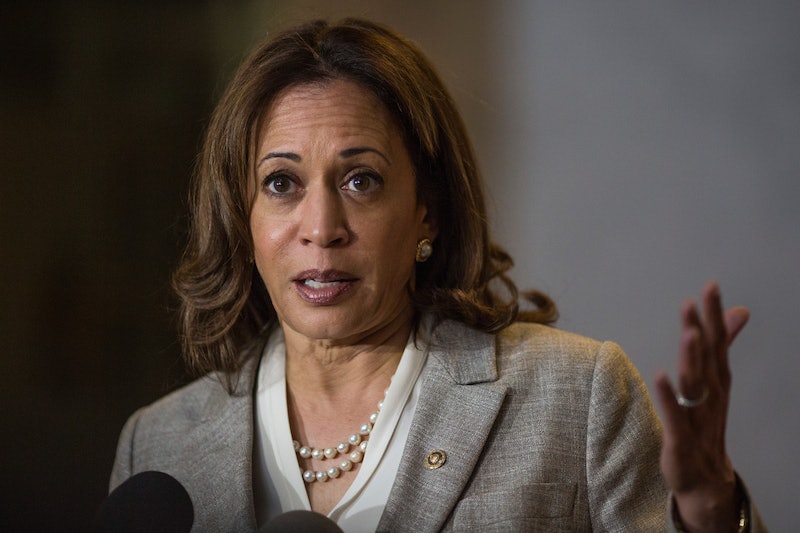 On Tuesday, Republican Sen. Ben Sasse dismissed the protesters at Supreme Court nominee Brett Kavanaugh's confirmation hearing, saying that their "hysteria" was unfounded. Sen. Kamala Harris responded to Sasse's "hysteria" comment with a sharp rebuke, however, and pointed to the long history of men calling women "hysterical" for voicing their beliefs.

"I think it's a mistake to refer to women who are using their voice to protest a flawed process, to refer to them as 'hysterical,' Harris said. "There's a whole line of discussion and writings on how the word 'hysteria' has been used to refer to talk about women who own their power."

There is indeed a long and misogynistic history of men calling women "hysterical" for acting in normal, human ways. For decades, women who expressed sexual desire were diagnosed with "female hysteria," and the term "hysteria" has often been used to dismiss women who passionately advocate for issues about which they are passionate about — including but not limited to their own reproductive freedom.

Supporters of reproductive rights have interrupted Kavanaugh's hearings on several occasions to protest his nomination, with some saying that "women will die" if he is confirmed. Sasse, however, brushed away their concerns, claiming that they were not reacting to Kavanaugh specifically, but to the mere fact that a new judge had been appointed to the high court.

"People are going to pretend that Americans have no historical memory, and supposedly there haven't been screaming protesters saying 'women are going to die' at every hearing for decades," Sasse said on Tuesday. "So the fact that the hysteria has nothing to do with you means that we should ask what's the hysteria coming from. The hysteria around Supreme Court confirmation hearings is coming from the fact that we have a fundamental misunderstanding of the role of the Supreme Court in American life now."

In reality, though, the protests have centered on Kavanaugh specifically, and demonstrators have not shouted similar things at "every hearing for decades." Although Kavanaugh hasn't explicitly stated that he opposes abortion rights, his past writings on the matter have led many to conclude that he opposes a woman's right to choose. Multiple anti-abortion groups celebrated his nomination after President Trump announced it in July; because Kavanaugh would replace a justice who broadly supported abortion rights, his confirmation would theoretically gives conservatives enough votes on the bench to overturn Roe v. Wade.

The word "hysteria," which Sasse used three times, implies unfounded alarmism, but as many pointed out, fear about the ramifications of abolishing abortion rights is very much grounded in reality: 22,000 women die from unsafe abortions every year, according to 2015 study in Science Daily.

In her comments on MSNBC, Harris also criticized the "lack of transparency" surrounding Kavanaugh's nomination, noting that Trump used executive privilege to withhold 100,000 pages of records from the public ahead of Kavanaugh's confirmation hearings. She said that this, too, is a reason why activists have protested his hearings.

"This committee has a right to fully vet this nominee. The American public has a right to know who he is. And there is so much on the line, and so much at stake," Harris said. "To suggest that people who understand the seriousness of this, and are protesting the lack of transparency, the lack of due process — to suggest that they're 'hysterical' is really to try and, I think, throw out a red herring and not deal with the real issue, which is that this is a hearing that is severely flawed, and it should be postponed until we can vet who this nominee really is."