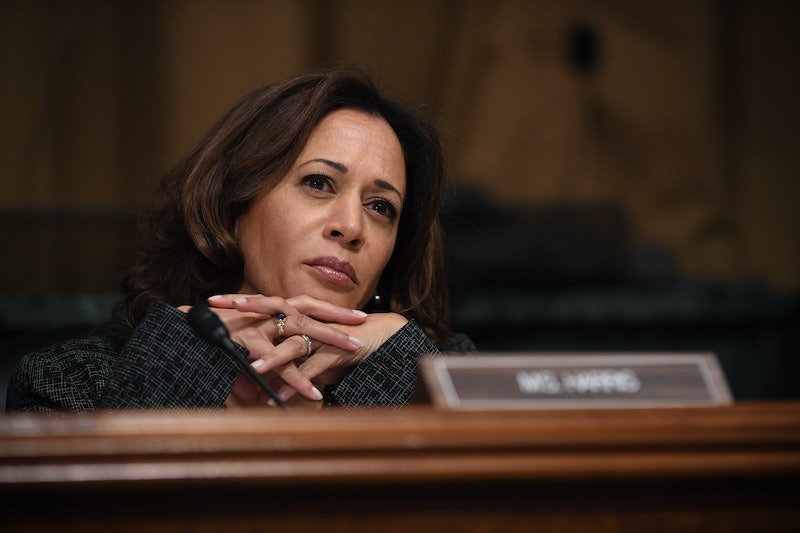 On Thursday, California professor Christine Blasey Ford testified before the Senate Judiciary Committee about her sexual assault allegation against SCOTUS nominee Brett Kavanaugh, an accusation that he has denied. When it came time for her questioning during the hearing, California Sen. Kamala Harris told Ford, "I believe you." The senator told her, "You have bravely come forward and I want to thank you. History will show you are a true profile in courage."

The Democrat began her comments to Ford by saying, "First of all ... you are not on trial. You are sitting here before members of the United States Senate Judiciary Committee because you had the courage to come forward because as you have said, you believe it was your civic duty."

Harris then told Ford that she was "struck" by her written testimony provided to the Senate Judiciary Committee on Sept. 26. In her written statement, the California professor described her decision to come forward with her allegation as part of her "civic duty." In July, Ford informed her own representative, Rep. Anna Eshoo of California, of the allegation. (Kavanaugh has repeatedly denied her allegation, and more broadly denied ever sexually assaulting anyone.)

The professor explained her rationale in her opening statement. "My hope was that providing the information confidentially would be sufficient to allow the Senate to consider Mr. Kavanaugh’s serious misconduct without having to make myself, my family, or anyone’s family vulnerable to the personal attacks and invasions of privacy we have faced since my name became public," she said.

Harris wasn't the only Democrat to have expressed gratitude toward Ford during the Senate Judiciary Committee hearing. Connecticut Sen. Richard Blumenthal, too, took a moment to thank Ford for coming forward as well as, he said, teaching the United States a much-needed lesson in courage.

He added, "The teachers of America, people of America, should be really proud of what you have done."

During the hearing, Ford said that she was unable to "remember as much as [she] would like to" as far as some of the exact details of the alleged incident were concerned. But in every round concerning the identity of her alleged attacker, Ford said she had no doubt it was Kavanaugh; at one point, she said she was "100 percent" certain it was him.

Reporting sexual assault is not an easy task, Harris said. At the point, the senator looked Ford in the eye and said, "I know having personally prosecuted sexual assault cases and child sexual assault cases that study after study shows trauma, shame and the fear of consequences almost always cause survivors to at the very least delay reporting if they ever report at all."