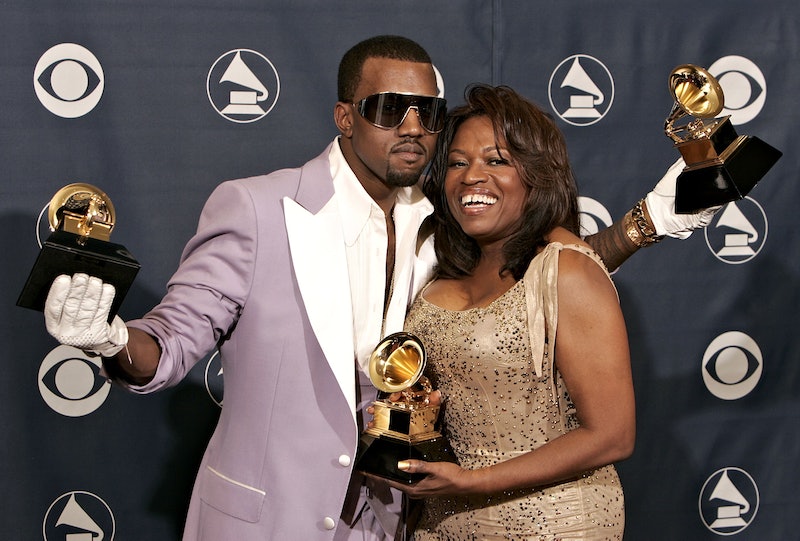 Gone, but never forgotten: In a touching tribute, Kanye West remembered his mom, Donda, as seen in a preview for an upcoming Season 2 episode of David Letterman's Netflix interview series, My Next Guest Needs No Introduction. The 21-time Grammy winner's wife, Kim Kardashian, with whom he shares four children — North, 5, Saint, 3, and 1-year-old Chicago, and a newborn, Psalm — shared the sneak peek on Twitter, promising her followers that "Kanye opens up to David Letterman like you’ve never seen him." (Kardashian also appeared in the video, supportively smiling at her husband of five years from the audience.)

That involved imagining what his mom would have been like as a grandmother. “This would have been the funnest time of her life, to have those kids running around that house and being able to go and buy them toys,” West told Letterman. (Donda died unexpectedly in 2007 at age 58 of "heart disease while suffering multiple post-operative factors after plastic surgery," per People.)

Even so, he believes her spirit is still present. As he added in the sit-down, “You know, she’s here with us. She’s guiding us.”

West also candidly shared a personal memory of his mom with the former late-night host:

“I remember my mother bought me a bear that was multi-colored. I was very into [Japanese artist] Takashi Murakami at that time, on that third album, Graduation. So she bought it. She said it kind of feels Takashi Murakami. I was sort of like, ‘I don’t want that, that ain’t no Takashi Murakami bear!’ Then she passed a few weeks after. I did everything I could to find that bear and place that bear on top of all the Takashi Murakami stuff I had in the house.”

In another segment, the "Hey Mama" rapper also opened up about his much-publicized mental health struggles. "When you're bipolar, you have a potential to ramp up, and it could take you to a point where you start acting erratic, as TMZ would put it," he shared, as seen in the full My Next Guest Needs No Introduction trailer. Also featured in the clip are the rest of Season 2's guests: Tiffany Haddish, Ellen DeGeneres, Melinda Gates and Lewis Hamilton. (All five episodes will available to stream on May 31.)

Per a review from The Daily Beast, West commented on his feud with Drake, too. Well, sort of. He reportedly mentions "an artist which I will not mention, because I’m not allowed to mention him or any of his family members” before later confirming he was referring to the "God's Plan" rapper.

Despite the lows he's experienced in his life, West has plenty to celebrate. In addition to feteing his fifth wedding anniversary with Kardashian on May 24, he, of course, also welcomed his fourth child weeks earlier. In a Mother's Day text, which Kardashian shared on social media (while also revealing Psalm's name), West wrote to his wife that they are "blessed beyond measure" and that they have "everything [they] need."

And while his mother, sadly, can't be with them in body to share in their joys, she still, as West mentioned, is very much with the family in spirit.