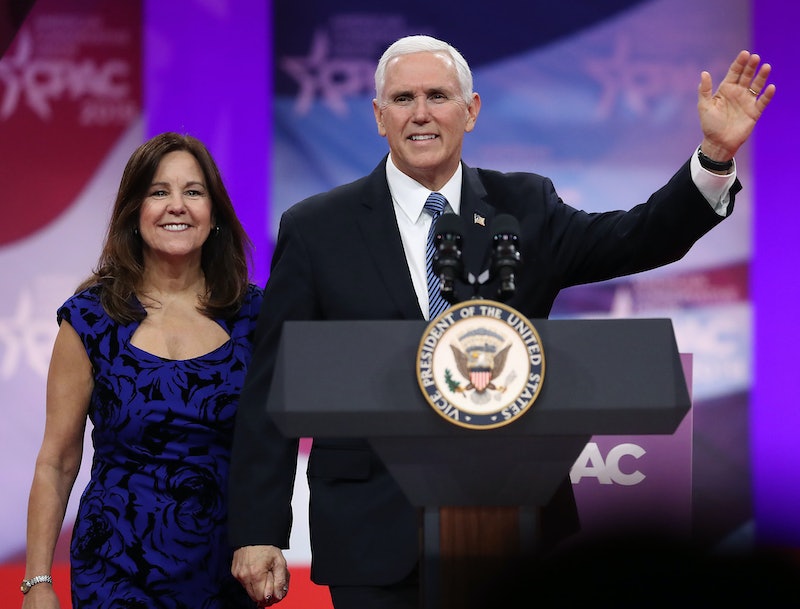 On Tuesday, the vice president's wife, Karen Pence, suggested Pete Buttigieg's comments about her husband were an attack on their religious faith. Pence made these comments during an appearance on The Brian Kilmeade Show on Fox Radio with her daughter, Charlotte, as a part of the promotional tour for their new children's book. And though her husband has explicitly denounced homosexuality in the past, Pence argued that the issue at hand was one of religious liberty and nothing else.

Pence was addressing comments that Buttigieg made recently, at the LGBTQ Victory Fund's annual brunch. Per The Hill, he said,

Speaking only for myself, I can tell you that if me being gay was a choice, it was a choice that was made far, far above my pay grade ... And that’s the thing I wish the Mike Pences of the world would understand: if you’ve got a problem with who I am, your problem is not with me. Your quarrel, sir, is with my creator.

Pence responded to Buttigieg's comments on Tuesday. When asked if she was surprised by the mayor's decision to bring up the vice president on his campaign trail, she replied,

They really have always had a great relationship, but I think that's part of what's so great about your book ... because one of the things that we start the book off with is religious liberty. And I think in our country we need to understand, you shouldn't be attacked for what your religious beliefs are ... kids need to learn that from a young age: that this is ok, no matter what faith people have, we don't attack them for their faith.

Pence later added, "It's kind of funny to me, because I don't think the vice president does have a problem with him. But I think it's helping Pete to get some notoriety by saying that ... but again, it just goes back to religious liberty."

Buttigieg has not addressed Pence's comments, but he did talk on Tuesday about that exact topic, doubling down on the fact that his marriage is just as legitimate as the Pences'. During a discussion with Father Edward Beck on Tuesday, a Catholic priest and faith and religion commentator for CNN, Buttigieg explained why he believed his marriage was "conservative," regardless of Pence's perception of it. He said, per The Hill,

It saddens me because when I think about the blessings of marriage, first of all it's one of the most conservative things about my life, very conventional ... It is morally one of the best things in my life. Being married to Chasten makes me a better person. I would even say it moves me closer to God.

Buttigieg added later in the interview, “If you believe marriage has to do with love, if also, by the way, at the risk of sounding a bit conservative, you believe that sex has to do with love, or ought to, then I think it takes you to a pretty specific place." He concluded, "I've learned that it's an expression of love, at least it can be. And I guess I believe it ought to be.”