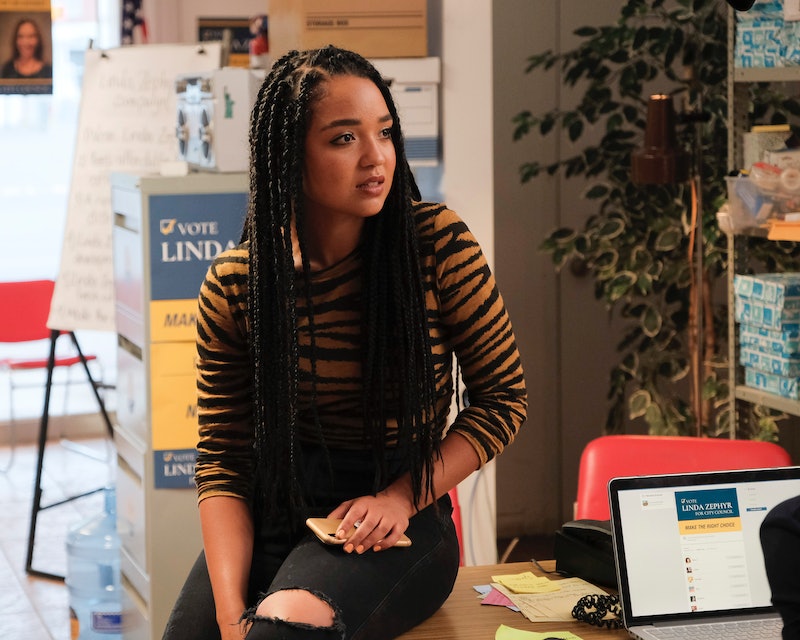 Spoilers ahead for The Bold Type Season 3, Episode 4. The Bold Type's Kat Edison is bold, politically engaged, and very outspoken about her beliefs — she is who she is and she's proud of it, for better or for worse. So it was only a matter of time before she made a run for office. Kat may only be in her mid-20s, but she's making a go of it for New York City Council, and who knows? She could win. In fact, Kat's candidacy on The Bold Type makes her exactly the kind of candidate that we could use more of IRL.

This all started because Kat wanted to bring down her current councilman, a politician who would rather add luxury high-rises to his district than focus on the issues that matter to his constituents. Though Kat initially threw herself behind another opponent, it's quickly evident to, uh, anyone who's ever met Kat that she is the one who should be on the ballot. She's smart, capable, polished, and determined as hell. She can accomplish anything she sets her mind to. However, she has a few things in her past she's not sure if she wants opposing candidates to dig up — namely that she was arrested, and the fact that she had an abortion.

It's not that Kat is ashamed. Per the New Yorker, abortion has been legal in New York since 1970 — a full three years before Roe v. Wade legalized it nationwide — and the city is socially liberal and pro-choice. But it's nonetheless a controversial issue that could put Kat's campaign at risk, as well as a deeply personal decision she understandably doesn't want used against her in a smear campaign; she hadn't even told Jane and Sutton about it, so the whole world is a pretty big leap. But, Kat being Kat, she decides to not only own it, but make it part of her platform — vowing to shut down the Crisis Pregnancy Centers that traumatized her campaign manager when she had her own abortion. (Crisis Pregnancy Centers are not abortion clinics, but pro-life organizations intended to prevent women from getting abortions).

This plot line aligns quite well with current political needs. A record number of women ran for first-time office in the 2018 midterm elections, and a lot of them won — including Alexandria Ocasio-Cortez, a freshman congresswoman from New York. Like Kat — though at 29, a few years older — Ocasio-Cortez is a millennial heavily passionate about her platform and unafraid to be real about who she is. She shares Instagram Live videos of her cooking and cleaning. She assembles IKEA furniture and answers policy questions. She openly tweets about having to scrape by to make rent and buying sale-rack clothes. She's not the kind of politician America is used to, but she does seem to be the kind people are looking for (they did elect her, after all).

Unlike Ocasio-Cortez, Kat comes from a wealthy, privileged background. But as a queer woman of color — and one who's been arrested and had an abortion — she, too, isn't someone who'd traditionally be considered an "ideal" candidate. It's no secret that, historically, white men have dominated American politics. But what Kat knows how to do, just like Ocasio-Cortez, is connect with people. She's the head of social at Scarlet! If anyone knows how to tap into what her constituents want and put it into action, it's her.

If anything, we need more faces like Ocasio-Cortez and Kat. People who are genuine and authentic and willing to talk about the tough stuff. People who own what they've been through and show their constituents that they can get through it, too. They may be young, but any politician could learn a thing or two from Kat and Ocasio-Cortez.