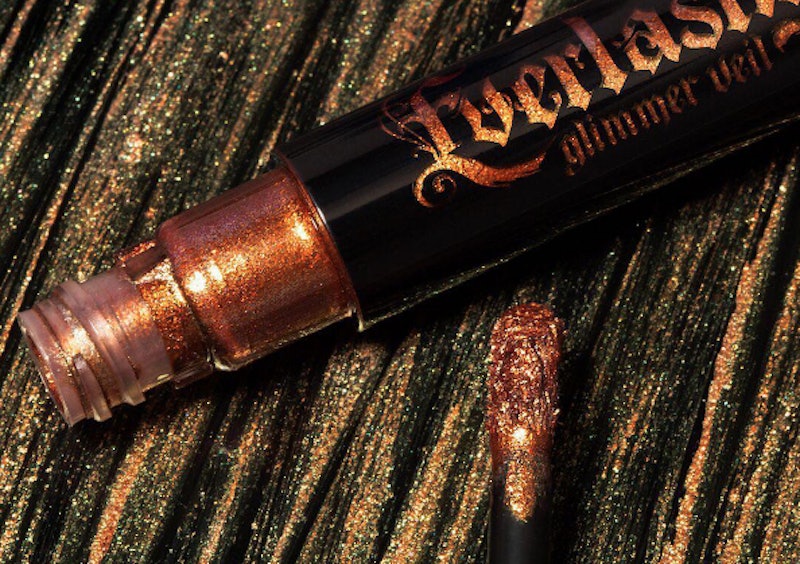 There's a certain form of torture that comes with limited edition launches. Some people immediately grab their wallets, while other scrape their pennies together, while hoping that it doesn't sell out in the meantime. According to Kat Von D's Instagram post, not even founders are immune to the pain.

Although their latest limited edition product is sold out, Kat Von D Beauty's Super Sonic Glimmer Veil is coming back. This is not a drill!

The world saw the first glimpse of Super Sonic — the brands latest Glimmer Veil shade — during the October Everlasting Flash Sale. The brand announced that it would only be available for 48 hours, while supplies lasted on the Sephora website.

Typically, the brand keeps their word and leaves their limited edition products in the vault, but not this time. According to Kat Von D's Instagram post, Super Sonic sold out in less than 48 hours, during the Everlasting Flash Sale. It was gone so fast that not even the founder got her hands on a backup.

"WHAT THE HELL GUYS?!," Kat Von D's Instagram posts starts. "[Super Sonic] was supposed to be limited edition, and I just found out it SOLD OUT in less than 48 hours, and I myself, only got ONE DAMN LIPSTICK! 😩 I'm thinking now I HAVE to bring it back permanently, cuz I'm not so sure I wanna live in a world without Super Sonic in it."

The shade is absolutely stunning and perfect for the holiday season, so it's a good thing that it's coming back. The metallic, orange lipstick has a golden-green sparkle to it. According to previous Bustle coverage, it's meant to be worn on it's own or paired over other shades.

There's no word on when exactly the lipstick shade will be available for purchase. Bustle reached out for comment, but it looks like all the exclusive info will come from Kat Von D Beauty's Instagram page.

This isn't the first time that a Kat Von D Beauty limited edition products has sold out super fast, either. The brand's previous Everlasting Flash Sales are almost all gone before the two day mark. Part of the reason is because the products are

The brand has an amazing way of taking trends and making them their own. Instead of just launching a metallic lipstick, they thought up the Glimmer Veils, which can be used as a lip topper as well. There are currently nine other shades, excluding Super Sonic, available on the Kat Von D Beauty website for $22 each.

Another reason why this product is super popular is that it looks incredible on a variety of skin tones. While the color is a bit unconventional, the pigment and sparkle shows up incredibly well on light, medium, and dark skin, according to the swatches done by Kat Von D Beauty.

Fingers crossed that this color gets here before Halloween, because I can see this being the perfect finishing touch on tons of different costumes. If not, this will definitely make a statement at any Thanksgiving event. Basically, it's the perfect fall shade that you never knew you needed in your life.

Let's hope that there's a tutorial on the Kat Von D Beauty Instagram page to go along with the relaunch as well. The founder rocks this shade every single time, and fans would without a doubt love to see how she does it. Either way, this is an exciting time in the makeup world.