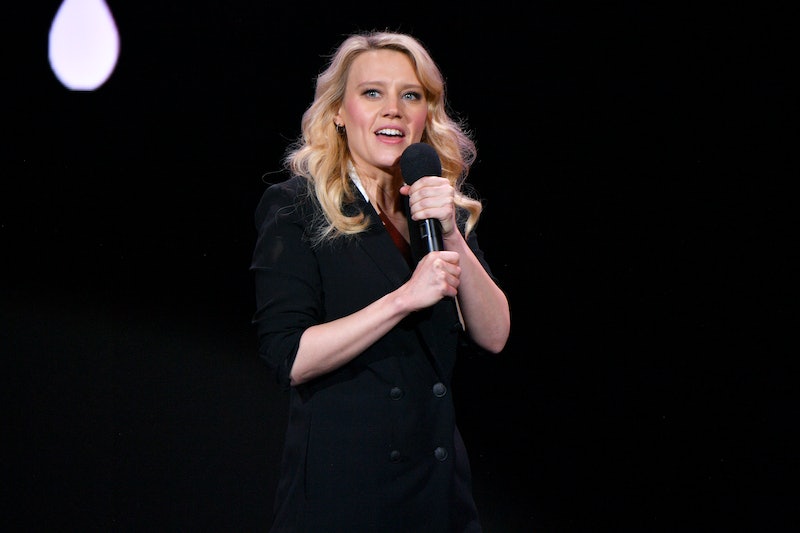 Brace yourself, gird your lions, and fasten your seatbelt over your Draper James dress, because Kate McKinnon’s Reese Witherspoon impression on Billy On the Street has hit the internet, and wow, what an exhilarating watch. How solid is the Emmy winner's understated impression of the Big Little Lies star, you ask? So solid, she and host Billy Eichner successfully fooled several of the humans they walked up to out a sidewalk in New York City. Some people spoke to McKinnon for tens of seconds without ever realizing they were not shooting the breeze with Reese Witherspoon. The current Saturday Night Live cast’s reigning queen of impersonations strikes again (because of course she does), and your ears, eyes, and heart will thank you for checking it out.

As convincing as the performance was, there were a couple of interviewees who would not be tricked into believing McKinnon was truly the actor who played Elle Woods in the Legally Blonde movies. For example, when Eichner stopped one woman to ask her if she thinks “Reese Witherspoon is grateful for freedom of speech,” she quickly replied, “Well, this is Kate McKinnon.” And when Eichner asked one man to praise Reese Witherspoon, he cheered, “SNL!” Eichner tried to tell him that it was actually Reese Witherspoon, he said, “Yeah, right.”

Ah, well. Suppose you just can't win-therspoon them all.

That said, it looks like McKinnon and Eichner fooled more people than not, and wow, are the reactions fantastic. One person wants "Reese Witherspoon" to run for office, another said she spotted "Reese Witherspoon" and Eichner at Pret a Manger earlier, and another person simply screamed. I do not know about you, but I personally relate to the woman who smiled nervously as her eyes darted everywhere while her friend shrieked at "Reese Witherspoon."

One of the humans who genuinely thought he was chatting with the real Reese Witherspoon said he met Witherspoon before, and never once did he doubt that the person standing next to Eichner was the very same person he chatted with at the Home Again premiere.

“You and I have Mary Kay and Nancy Meyers in common,” he explained. “We were at Nancy Meyers’s daughter’s film and remember we had a long conversation.” He told her he is “Sheila’s husband” and then invited her to dinner. For a moment, you feel bad that this nice man erroneously believed he bumped into national treasure Reese Witherspoon. But then you remember he actually bumped into national treasure Kate McKinnon. Either way, it is a very special celebrity encounter.

Petition for the real Reese Witherspoon, Kate McKinnon, Billy Eichner, and "Sheila's husband" to all get dinner together at the Hotel Chelsea on a future episode of Billy On the Street. Heck, invite Laura Dern to this dinner, too. She can bring a bucket of water or two, and it will be just that totally real and not at all made up anecdote about pranks on the Big Little Lies set that "Reese Witherspoon" shared with us.

More like this
Jonathan Bailey’s BTS ‘Bridgerton’ Photos Celebrate 6 Months Of “Kanthony”
By Stephanie Topacio Long
'Grey's Anatomy's New Intern Got Advice From Dr. Bailey Herself
By Grace Wehniainen
Nicola Coughlan’s Description Of Meeting Olivia Colman Is Just So Nicola Coughlan
By Sam Ramsden
Paul Mescal, Man Of Mystery
By Samantha Leach and Heather Hazzan
Get Even More From Bustle — Sign Up For The Newsletter