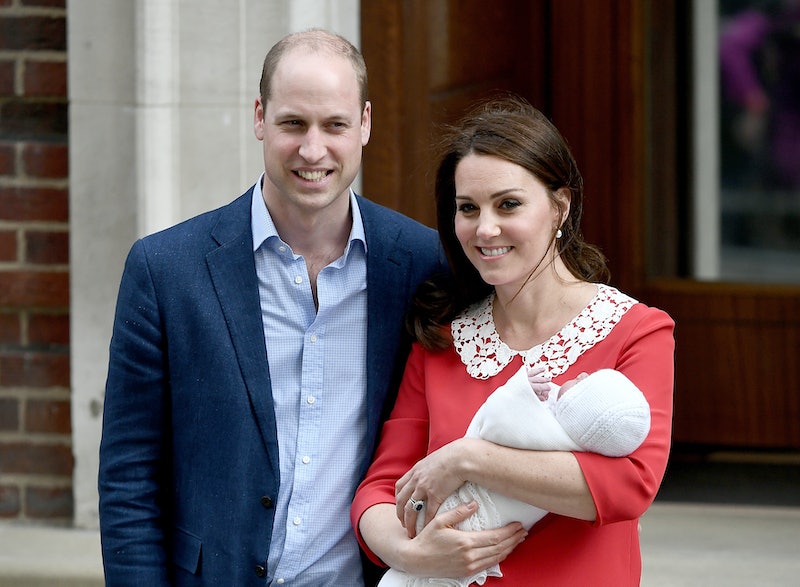 The newest addition to the royal family is here, and while British royal enthusiasts don't have a name for the bouncing baby boy quite yet, they have gotten a peek at him — and his famous parents. While the occasion is all about the expanding family, Kate Middleton's red dress when leaving the hospital could also be a tribute to a family member: Princess Diana.

If you're not a obsessed with the royal family or if you've just got a passing interest, you may not know that following the birth of a new member of the family, the baby is premiered outside of the hospital. During these premieres, the world and the press get their first look at the new bundle of joy, and of course, that's the whole point. However, the ensembles also garner tons of attention. After all, Kate Middleton's style is one of the most copped. Items she wears sell out almost instantly once revealed.

This time, the world appears to be less interested in copying her look (though that's undoubtedly coming), and more interested in the fact that her late mother-in-law Princess Diana wore the same red hue when she gave birth to her second born son, Prince Harry, just as Middleton did on April 23.

While premiering her new son, Middleton stepped out of the hospital doors wearing a beautiful red shift dress with a high neckline and lace detail. While the dress's details do not resemble Princess Diana's, the color and shift silhouette are undoubtedly the same.

This isn't the first time that Middleton has seemed to pay tribute to Prince William's late mother. When debuting her first born son George, Middleton choose to wear a blue polka dot frock similar to the one Prince Diana wore when William was born.

Fans of the royal couple on Twitter have certainly noticed the subtle but meaningful homage to Princess Dianna, and the general consensus appears to be that they love it.

People are praising the Duchess of Cambridge for the sartorial choice.

Others are simply in awe of Middleton. After all, she did just give birth a few hours ago. Now, she's looking beautiful, honoring her late mother-in-law, and debuting her third child. It's been a busy day for the Duchess of Cambridge.

Others noted that the colors corresponded to the order of the boys' births. Both Middleton and Princess Diana wore blue for their first son and red for their second. While Middleton did break up the color scheme by wearing yellow when Charlotte was born, she is a girl, a gender that Princess Diana never had.

While some could say that it's simple coincidence, the combination of color, design, and the dress being worn for the birth of son number 2 all seem to lead to more than just simple serendipity.

Regardless of whether you believe the tribute was intentional, the majority of Twitter appears to believe it is.

Given Middleton's history of honoring Princess Diana, the whole thing certainly appears to be more than plausible. After all, nearly all members of this generation's royal family seem to honor Diana in some way. Even Meghan Markle's engagement ring features diamonds from the late Princess's personal collection.

While the newest addition to the royal family has clearly stolen the show, Kate Middleton's red dress is notable for its sweet homage to Princess Diana. From the hue to the white collar to the decision to wear it for the birth of her second son, Middleton seems to have put great thought into how to honor her late mother-in-law, and it makes the tribute all the more sweet.