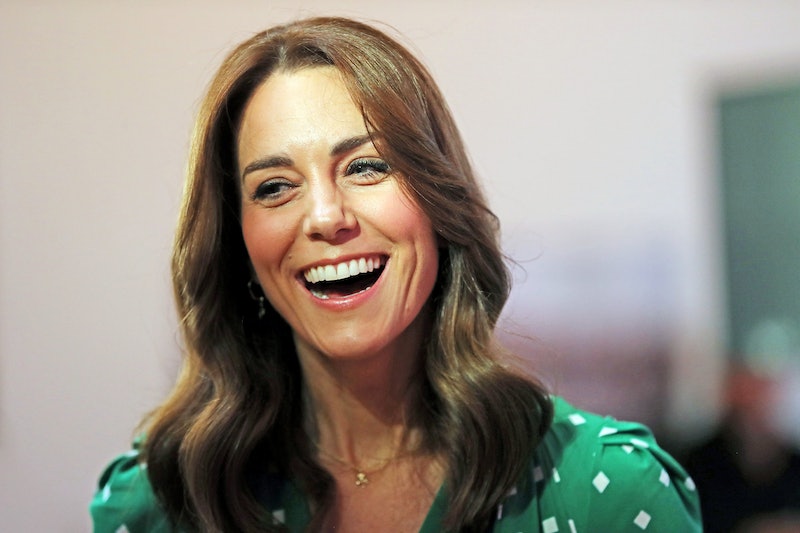 Prince William and Kate Middleton's first ever tour of Ireland certainly brought out the Duchess of Cambridge's sustainable side. Not only did Kate re-wear numerous pieces (some even from her pre-royal days), she also donned a vintage outfit and pleased the Irish with her emerald ensembles. A true masterclass in using your own wardrobe to create a fresh new look.

After arriving in Ireland on March 3, William and Kate visited the country's President and Taoiseach as well as taking a walk through Dublin's Garden of Remembrance. There, the couple laid a wreath to remember all those who lost their lives in the bid for Irish freedom, per the Irish Times.

Unsurprisingly, the Duchess showed up with a clear aim to please. But her all-green look — a colour long associated with the Emerald Isle — was especially interesting, considering this is the first royal tour since Brexit.

Consisting of a Catherine Walker coat and rose-printed Alessandra Rich dress, Kate's Irish wardrobe proved its thriftiness right off the bat. As famous royal fashion blog, What Kate Wore, reported, the buttons on the Duchesses silky dress had been altered to match the ones on her coat. (A move I will 100% be copycatting in the future.)

In the evening, the royal gave yet another style-conscious lesson. Mixing a £1,595 designer dress by The Vampire's Wife and matching velvet Manolo Blahnik heels, she accessorised with huge statement earrings from none other than H&M. (Unfortunately, they're sold out.)

For a day mixing romanticism with serious issues, the Duchess re-wore a much-loved coat. (A hint of nostalgia for better times, perhaps?) First seen on her at William's 2008 RAF graduation ceremony, per Harper's Bazaar, the white Reiss coat also seemed to have taken a trip to the tailors. Its previous flared hem had disappeared, making way for a much slimmer silhouette.

Underneath, Kate showcased yet another re-wear. This time, a polka dot Equipment blouse that was first worn in Sep. 2019. Her heeled boots, however, were new, reportedly costing £225 from Russell and Bromley.

Later that day, the Duchess swapped her put-together look for a much more casual one. For a walk along Howth Cliff (where the couple took a romantic snap), she donned a Barbour x Alexa Chung checked shirt, a jacket from Irish brand Dubarry, and the Penelope Chilvers tasselled boots she has been wearing since 2004.

Vintage was the theme of Kate's final outfit of the day. Attending a formal reception in Dublin, she stunned in a vintage pink polka dot dress by Oscar de la Renta. Her black velvet Jimmy Choo clutch and matching heels have been spotted before, per What Kate Wore.

The third and final day of the Cambridge's Ireland trip saw Kate's wardrobe seamlessly mix Irish charm with British design. In Galway, she chose a 1940s-esque green and white dress by Suzannah London, teaming it with a pre-worn Alexander McQueen coat. Her suede Ralph Lauren boots have also been worn before in Blackpool and Leicestershire.

The Duchesses final casual ensemble took a high street turn once again. Zara jeans and New Balance trainers — long-favoured brands by the royal — were teamed with a vibrant chunky jumper by British label, Really Wild. A look that had a hidden ethical slant; the coral knit is crafted in Scotland "by makers who run a zero yarn waste production."

In a tumultuous time for the royal family, it's comforting to know that Kate is encouraging positivity — whether an attempt to relate to others, a bid to remain on good terms with neighbours, or a simple message to go green.