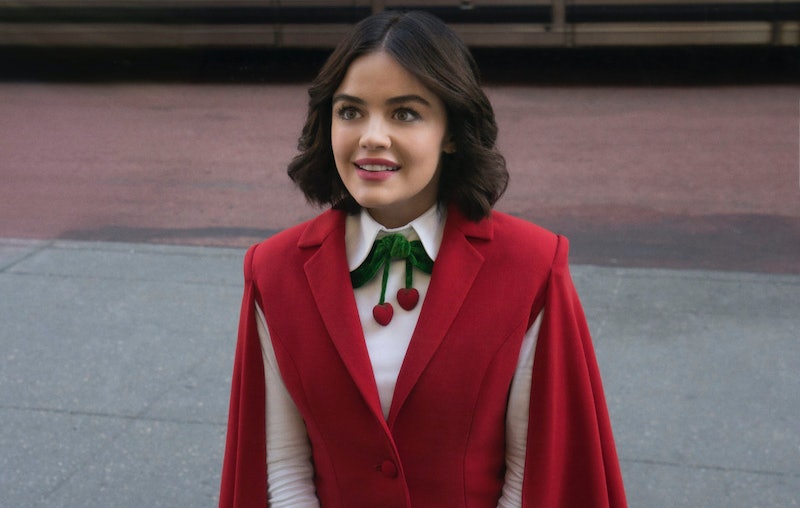 The time has finally come: Riverdale spinoff Katy Keene premieres Thursday, Feb. 6 on The CW. It follows Lucy Hale as the titular character, who's an aspiring fashion designer and personal shopper living in New York City. Just like Archie and the gang, Katy is also from the Archie Comics, and has an extensive history you may want to brush up on before watching the new show.

The character was created by the late Bill Woggon in 1945, according to the site Cherrymeltdown, which is run by his grandson Jerico. Katy made her debut in the Wilbur Comics, but soon graduated to her own series, which was published by Archie Comics from 1949 to 1961, shelved in 1961, and then revived from 1983 until the early '90s, per the Archie Comics website. Archie Comics re-introduced Katy in their 2005 Free Comic Book Day issue, and also featured her in issues #101-110 of Archie & Friends. In January, the company launched a new Archie and Katy Keene mini-series featuring a modernized version of the character.

Woggon's daughter, Susan Bothke, told Cherrymeltdown that the original comic book storylines were sometimes inspired by family events. "When I was getting married, Katy got married," she recalled. Characters, too, were modeled after Woggon's real life: his son Bill Jr. told the site that Katy's boyfriend, K.O. Kelly, "was fashioned after my grandfather. Sis the Candy Kid was after my sister Susie, and Gloria, Katy's rival, was patterned after my mother. Katy, however, was "just a creation" inspired by pin-up girls. "During the war years, there were many pin-ups of young women for calendars and young G.I.s would have these characters," Bill Jr. explained.

It's a bit ironic that a middle-aged father dreamt up such a hip, fashionable young female character, but Bill Jr. said that his dad got help from fans. "[Katy] was always wearing these neat clothes. Kids would send in their drawings," Bill Jr. told Cherrymeltdown. "[My dad] would take the drawing and no matter how good the drawing was, re-draw it but keep it as close as possible to what [the child] wanted to do. [The kids] would see their name and they started fan clubs and pen pals."

According to the New York Times, Woggon would credit his fans' design ideas in the comic books. Fashion designer Betsey Johnson was one such fan who submitted drawings, but her ideas were never used. Perhaps now, Johnson will finally get her shot, and Katy will wind up wearing one of her designs in the show.