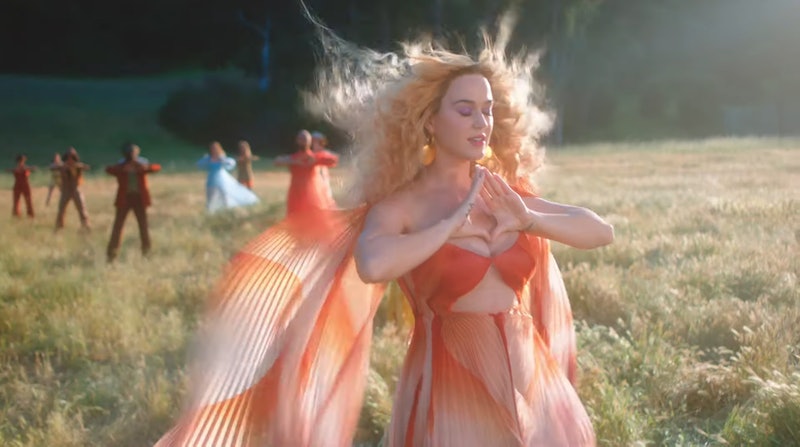 Get ready to want to frolic in a field with your favorite pop star. Because the Katy Perry's "Never Really Over" music video will leave you feeling like you've been transported to a new age retreat straight out of the '70s. In her latest single, Perry sings about heartbreak and getting back together with an ex. While that sounds rather toxic, the "Never Really Over" video itself all about love and acceptance. And just like Perry is embracing falling back in love, fans have already come to embrace the new song — especially since it's reminiscent of classic Perry.

Two years have passed since Perry released new music, with hits like "Chained to the Rhythm" and "Swish Swish" off her album Witness. Her new song "Never Really Over" is just a single, with Variety reporting that Perry hasn't promised there will be an accompanying album. But that hasn't stopped fans from being pleased to hear that the song sounds more like 2010 Teenage Dream Perry than 2017 Witness Perry.

Whichever Perry sound you prefer though, she doesn't seem to mind as she is working to be zen about everything in the "Never Really Over" video. In the clip, the singer tries a number of love-themed alternative therapies — like acupuncture and cupping — and seems to find joy with her fellow hippies à la "Aquarius" from Hair.

Entertainment Weekly reported that in the Capitol Music press release for the song, Perry wrote that "Never Really Over" was about the good and bad of relationships and making peace with that. "All of our relationships — from first love, through failed love, to great love — all become a part of you," Perry said. "So that none are ever really over, and once you accept both the dark and the light, you may find that the darkness brought you to the light." Considering her sun-filled choreographed romp in the fields is balanced with a ritualistic nighttime fire pit session, the music video reflects that dark and light aspect with light winning out.

With Perry's comments and the lyrics of "Two years, and just like that/My head still takes me back/Thought it was done, but I/Guess it’s never really over," her relationship with current fiancé Orlando Bloom inevitably comes to mind. After first dating in 2016, the pair had taken a break in 2017 before Perry confirmed they were officially back together in April 2018. They became engaged in February 2019, so the "two years" reference could be about Bloom, and fans are even wondering if he makes a cameo in the video.

But "Never Really Over" doesn't just have to be about romantic love. Variety also reported that Perry told a group of fans at a preview of the video that it's about achieving a healthy headspace. "It's really just a song about the choices we have in life to take steps forward or backward, and how your mind is extremely powerful," Perry said. "It's also about acceptance, and the yin-yang of how you can't ever get rid of the dark, but you can accept that maybe it was a lesson for you to get to the light."

Besides applying this sentiment to herself, Perry is giving positive vibes out there in the world to her fellow female artists. May 31 was a big day for music with Perry, Miley Cyrus, Cardi B, Tove Lo, and Bebe Rexha all dropping new tracks. Perry took the time to acknowledge their accomplishments — as well as Camila Cabello, Charli XCX, and Spanish artist Rosalía, who also all released new music this week — on her Twitter in the midst of people showing support for "Never Really Over."

No matter how you interpret the lyrics, Perry's music video message is clear: Let the sunshine in. Because when you embrace both the dark and light, you'll achieve love and peace within yourself and put that spirit out into the world.