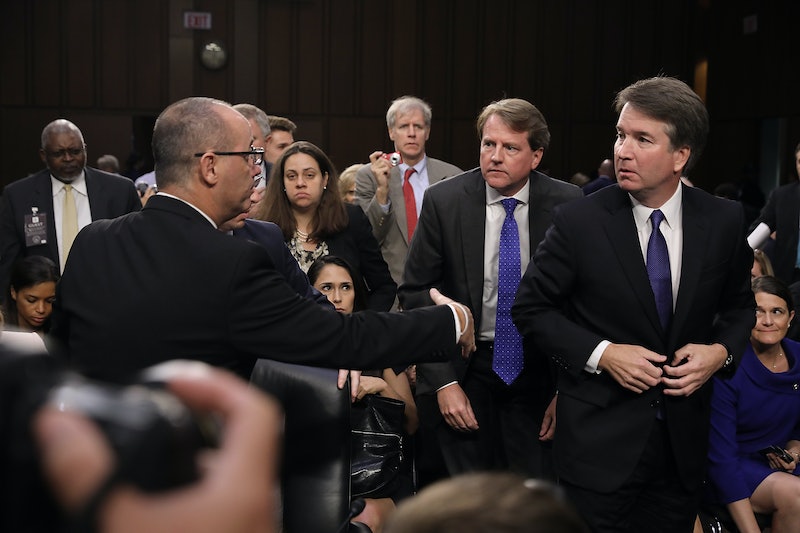 Supreme Court nominee Brett Kavanaugh’s confirmation hearings were dramatic for myriad reasons. But one moment stood out — and it wasn’t because of a tough line of questioning. It was because the judge appeared to refuse to shake the hand of the father of a Parkland school shooting victim. Now, Kavanaugh is explaining the Parkland handshake snub from his own perspective.

Kavanaugh submitted a document that answered over 1,000 questions from various senators, and it was released to the public on Wednesday. In it, Kavanaugh wrote that he would have shaken Parkland parent Fred Guttenburg’s hand, but he didn’t recognize him right away, and then he was taken away by his security detail. Guttenburg, who lost his 14-year-old daughter Jaime in the Parkland, Florida school shooting, approached Kavanaugh during a break at the Senate Judiciary Committee hearings, and Kavanaugh said in his written responses that he thought he was one of the protesters. Kavanaugh explained his misstep in the 263-page written response to questions from senators, writing:

“In that split second, I unfortunately did not realize that the man was the father of a shooting victim from Parkland, Florida,” Kavanaugh wrote. “Mr. Guttenberg has suffered an incalculable loss. If I had known who he was, I would have shaken his hand, talked to him, and expressed my sympathy. And I would have listened to him.”

The apparently inadvertent snub from Kavanaugh was shown in an Associated Press photo that went viral. It was Iowa Republican Sen. Chuck Grassley who first asked Kavanaugh about Guttenberg in the extended Q&A document. Kavanaugh partially blamed his faux pas on the craziness of the morning.

"It had been a chaotic morning with a large number of protestors in the hearing room," Kavanaugh wrote. "As the break began, the room remained noisy and crowded. When I turned and did not recognize the man, I assumed he was a protestor."

At the time of the hapless handshake incident, Guttenberg tweeted his own account of what happened with Kavanaugh, saying that he thought the judge may have ignored him because he "did not want to deal with the reality of gun violence."

Guttenberg — who was at the hearings as a guest of Sen. Dianne Feinstein, New York magazine reported — expanded on his reasoning for approaching the judge in an interview with The Washington Post. “I wanted to introduce myself, but I also wanted to simply say to him, listen, you have a beautiful family, you’re a father,” he told The Post. “'I want to know that you are going to look into my eye and understand the pain of a father."

In the document answering senators' questions, Kavanaugh also wrote that he didn't ask Capitol Police to have Guttenberg removed from the room, and he didn't know if someone did so on his behalf.

"No one acted at my request," the document says. "If someone purported to act on my behalf, they did so without my knowledge and contrary to my wishes."

As America awaits a final vote on Kavanaugh's confirmation, time will tell whether the Guttenberg blunder has any impact on his appointment.