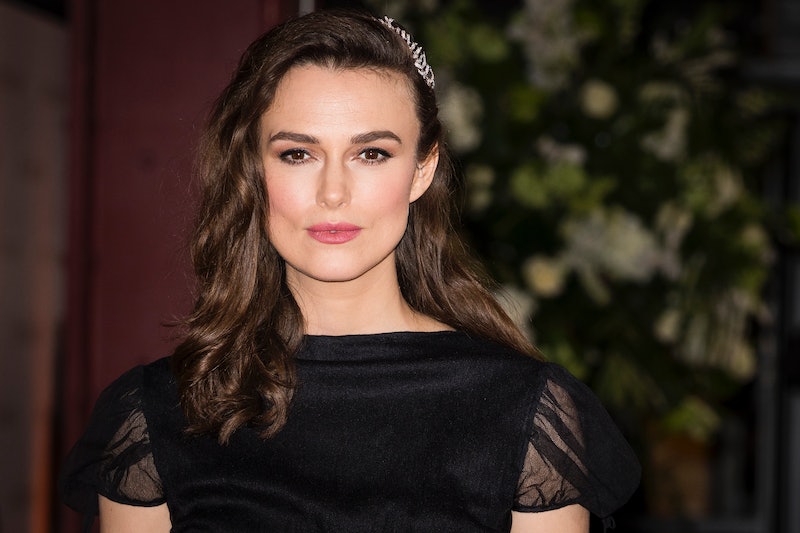 Did you hear that sound? The pitter patter of tiny feet? OK not yet but it looks like before we know it, that will be a go-go. And from a serious A-Lister who is low key one of our biggest exports. She makes marmite look un-British. Yes, you guessed it — People reports that Keira Knightley is pregnant with her second child. Bet you thought I meant a royal baby didn't you? Which is easily done because guys, Knightley is low key Hollywood royalty.

As People reports, it was on a jaunt out in Paris this past Thursday that she revealed her baby bump. Bustle contacted her representatives for comment on this, as they are yet to confirm the pregnancy. I'll let you know if there are any updates. Now, this is Hollywood royalty like I said so it wasn't just nipping out for a Maccy D's. No, it was the J12 cocktail party. I know right, I didn't get an invite either. The J12 is Chanel's newest watch and, of course, Knightley was sporting one. Well guys, that is a part of her actual job. No, not as an actress but as an ambassador. She has been a Chanel ambassador since 2008, and I guess part of that is fabulous events and timeless time pieces.

Knightley hit up the event with her husband James Righton. Righton is best known for formerly being in Brit band The Klaxons. The loved up pair married in a cute AF and super intimate ceremony in France six years ago, as the Telegraph reports. Doing effortless chic as ever, they definitely set a bit of a couples-goals precedent there.

Together they already have one child, a daughter called Edie. People reports Edie is turning four this month, so it looks like it will be a busy year for the Knightley-Rightons.

To be fair it has been a busy few years work-wise for Knightley so now might well be a good time to take some well deserved time off and maternity leave. Her film Collette, which premiered earlier this year, was all about female empowerment. Even though it is a period drama —the story feels just as pertinent today as we still strive for equality.

Knightley has been outspoken in the past about how difficult being a mother really is. She spoke to Balance about the multitude of struggles women face in motherhood, admitting that even with her lucky situation that it has been hard.

"I don't think we give women enough credit for the physical and emotional marathon they go through when becoming a mother. I come from a place of amazing privilege. I have an incredible support system; I've been unbelievably lucky in my career; I can afford good childcare, and yet I still find it really f****** difficult. It's OK to say that. It doesn't mean I don’t love my kid, it's just me admitting that the sleep deprivation, the hormonal changes, the shift in relationship with my partner, are all things that make me feel as if I'm failing on a daily basis. I have to remind myself that I haven't failed, I'm just doing what I can do, but it's not easy".

So 2019 for Knightley is set to be a year filled with movie releases, Chanel events, parenting, and a second child. Might be time for her to stick the out of office on.

More like this
Holly Willoughby & Phillip Schofield #Queuegate Drama, Explained
By Sophie McEvoy
Alan Rickman's Diary Reveals Why He Considered Leaving 'Harry Potter'
By Darshita Goyal
Meghan Markle Delivers Empowering Message About Being Yourself
By Sophie McEvoy
Kate Middleton's Kids Had A Brutal Reaction To Old Snaps Of Her & Prince William
By El Hunt
Get The Very Best Of Bustle/UK