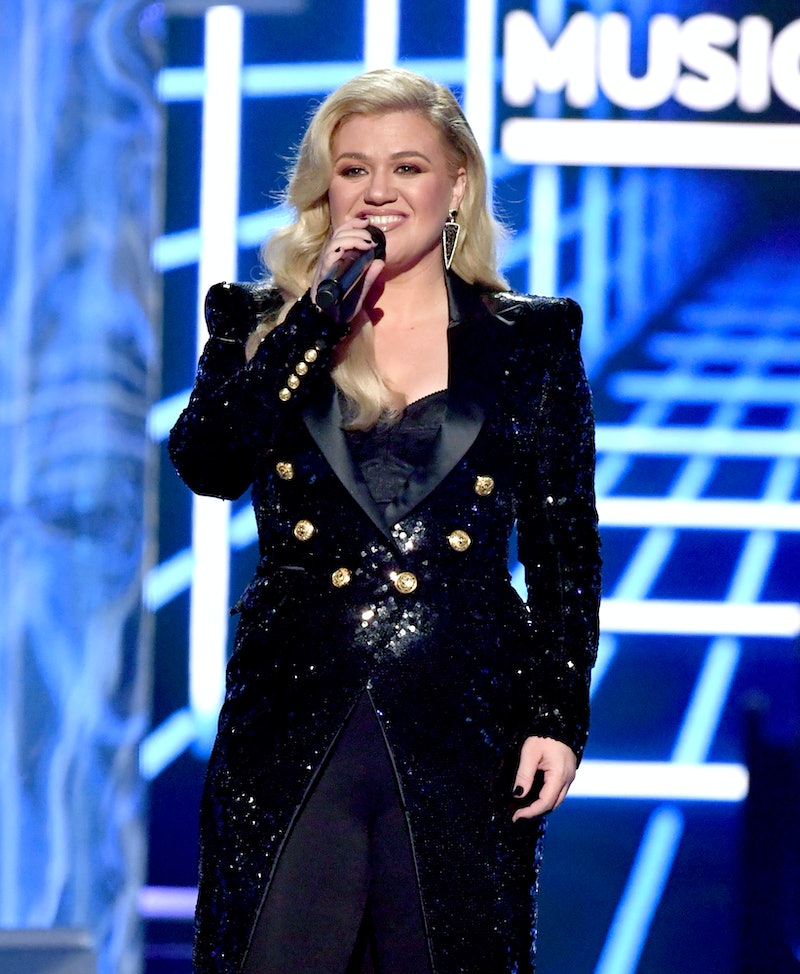 You wouldn't know just by watching the 2019 Billboard Music Awards on Wednesday, May 1, but Kelly Clarkson had her appendix removed right after hosting the BBMAs.The singer underwent surgery the very next morning, on Thursday, and her strength and fortitude through the situation is certainly something to be admired. The 37-year-old singer confirmed reports about the surgery via Twitter on May 2, telling followers, "Not gonna lie.... I may or may not have broken down in tears after the show from pain"

In her tweet, Clarkson revealed that the surgery took place at Cedars-Sinai Medical Center in L.A. on Thursday morning, and shared that she is currently on the road to recovery. "Thanks 2 all the amazing people @ Cedars-Sinai I flew home directly after the event, nailed the surgery early this morning, & feeling awesome now!," she shared. At the close of her tweet, Clarkson added, "Bye bye appendix #TheShowMustGoOn"

Despite suffering through what sounds like excruciating pain stemming from appendicitis, Clarkson managed to put on an unbelievable show at the MGM Grand in Las Vegas on Wednesday night, where she took on the duty of being the BBMAs host for the second year in a row. In the show's opening alone, she burned through a medley of covers of Zedd, Maren Morris, and Grey's "In The Middle," Ella Mai's "Boo'd Up," Cardi B's "I Like It," Calvin Harris and Dua Lips's "One Kiss," and Maroon 5's "Girls Like You," among many others.

During the bit, Clarkson also took a moment to poke fun at herself after she was mistaken for a seat filler at the Academy of Country Music Awards back in April. As she prepared to open the show, Clarkson sat in the audience and began chatting with Terry Crews. She was then interrupted by a security guard, played by former NFL star Rob Gronkowski, who informed her that she was sitting in a seat reserved for Florida Georgia Line. The segment was both entertaining and hilarious as Clarkson, who was later dragged away by "security," began effortlessly belting out some of the year's biggest hits. Needless to say, Twitter loved every minute of it — but little did fans know that Clarkson was enduring pain so severe that it brought tears to her eyes at the end of the night.

The opening wasn't the only thing that kept Clarkson's name abuzz on social media throughout the evening. Later in the show, she returned to perform her new song, "Broken & Beautiful," and also went through many wardrobe changes while commanding the night, garnering a great deal of attention from fans on the internet.

All-in-all Clarkson was an amazing host from start to finish and, as an outsider viewing from home, it appeared that she was breezing through the BBMA hosting gig without a hitch. With this recent news, it's hard to imagine how she did all of this while suffering so much stomach pain. But, being the pro that she is, Clarkson somehow managed to push through to put on a phenomenal show for the second year in a row.

More like this
20 Years Later, Kelly Clarkson & 'American Idol' Judges Reunite For Her Hollywood Walk Of Fame Star
By Radhika Menon
Twitter Is Freaking Out Over Rihanna’s 2023 Super Bowl Halftime Show Announcement
By Stephanie Topacio Long
Everything To Know About Taylor Swift’s 10th Studio Album, 'Midnights'
By Grace Wehniainen and Jake Viswanath
Kanye West Apologizes To Kim K "For Any Stress I Have Caused" In Rare Interview
By Jake Viswanath
Get Even More From Bustle — Sign Up For The Newsletter