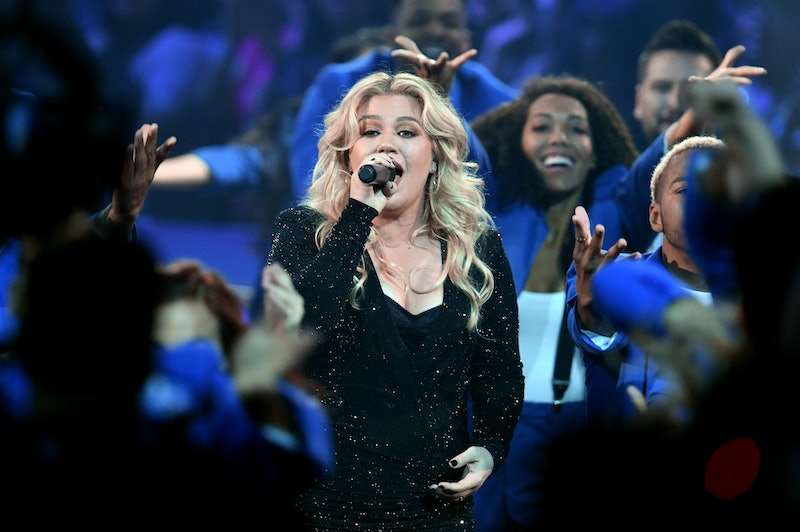 For the second year in a row, Kelly Clarkson's Billboard Music Awards performance included a dazzling medley of the year's biggest hits. In the span of a few minutes, she burned through covers of Zedd, Maren Morris, and Grey's "In The Middle," Ella Mai's "Boo'd Up," Cardi B's "I Like It," Calvin Harris and Dua Lips's "One Kiss," and Maroon 5's "Girls Like You," among many, many others. And it was just as good, if not better, than her medley from last year. Clarkson is the kind of performer who never disappoints.

Clarkson was at one point interrupted by former NFL star Rob Gronkowski, who posed as a security guard and informed her that she was sitting in a seat reserved for Florida Georgia Line. The BBMAs host then looked to former American Idol judge Paula Abdul to back her up, but no dice. The icon looked at her perplexed.

But no matter, Clarkson breezed past the snafu — because, um, she's Kelly Clarkson. It was an epic moment all around and, needless to say, Twitter was totally living for it. She should just make the medley thing a BBMAs tradition at this point, right? Even if she's not hosting? Fans seem to think so.

Clarkson's Vocals Were Incredible As Usual

She Slayed It Not Once, But Twice

Another Twitter user pointed out how Clarkson has managed to do an excellent job two times in a row.

Others Were Already Watching It Back

This fan was so enamored by Clarkson's opening act that she watched it twice.

Some Thought She One-Upped Everyone Else Onstage

And This Fan Even Campaigned For A Clarkson Halftime Show

Looking at you, NFL.

While This One Said Clarkson Should Just Sing Everything

The Woman Even Trended

Clarkson was up for no awards at the BBMAs and was sharing a stage with legends like Paula Abdul and Mariah Carey, but she still managed to trend on Twitter.

Clarkson's 2019 BBMAs performance was a great follow-up to last year's performance. Her 2018 medley, which similarly won over the hearts of fans on Twitter, included Kendrick Lamar’s "HUMBLE," Cardi B and Bruno Mars' "Finesse," Ed Sheeran's "Shape of You," Sam Smith's "Too Good At Goodbyes," Shawn Mendes' "Nothing Holding Me Back," and Taylor Swift's "Look What You Made Me Do." And this year, she seems like more of a pro than ever, bringing a great energy to the stage and totally setting the tone for the night.

With that said, Clarkson was an amazing host through and through, nailing her duties from start to finish. And if her medley from this year serves as any indication, there's no doubt she'll be back to do it again in the very near future. If Clarkson doesn't wind up hosting next year, whoever does get the gig is going to have some seriously huge shoes to fill.

More like this
Is Dua Lipa Dating Trevor Noah? New Photos Show Them Kissing & Hugging
By Brian Anthony Hernandez and Martha Sorren
Everything To Know About Taylor Swift’s 10th Studio Album, 'Midnights'
By Grace Wehniainen and Jake Viswanath
Twitter Is Freaking Out Over Rihanna’s 2023 Super Bowl Halftime Show Announcement
By Stephanie Topacio Long
Jason Derulo Is Launching A New Singing Show In The UK
By Maxine Harrison
Get Even More From Bustle — Sign Up For The Newsletter