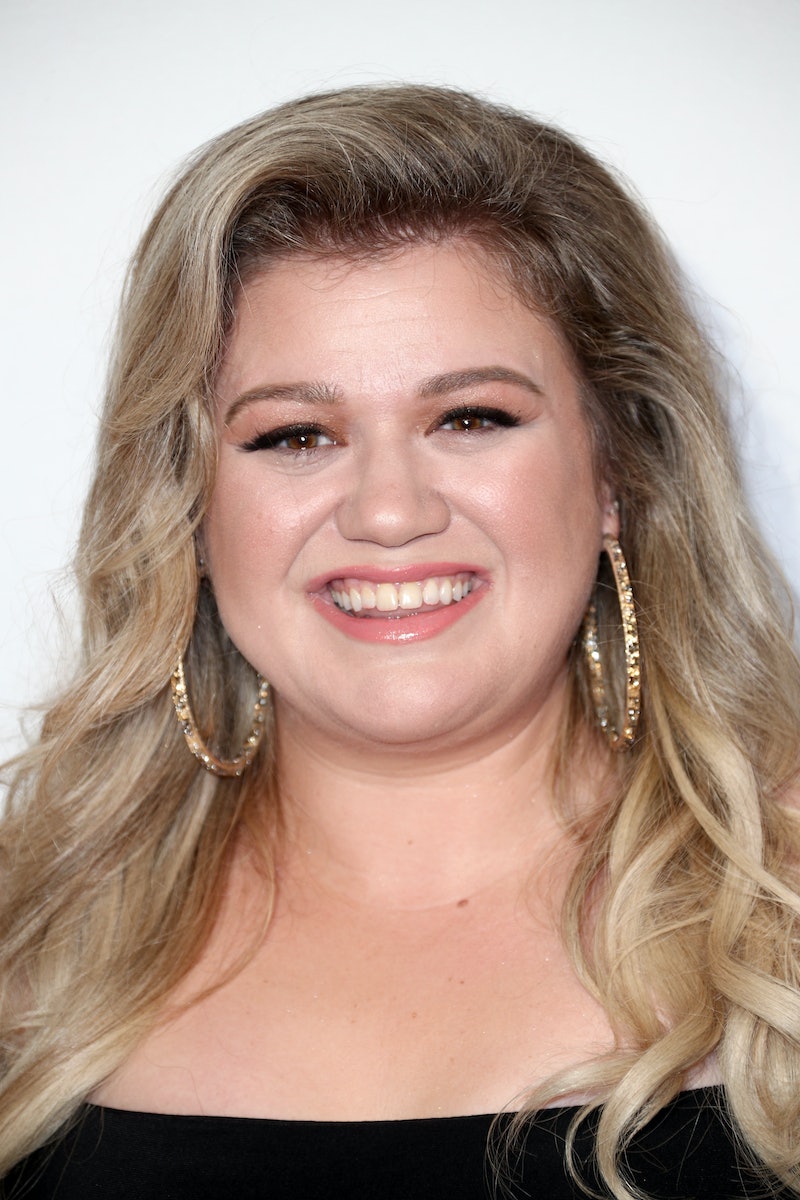 Not satisfied with just having the voice of an angel, Kelly Clarkson has apparently decided that she had to have the personality of an angel, too. The singer has released a Michelle Obama-inspired anthem titled "Go High," and it's everything. The track was released with Clarkson's eighth studio album, Meaning of Life, which dropped on Friday, and it's already bowling fans over with its empowering message.

In the first verse, the mother of two sings about how impossible things can feel at times and how easy it is to get overwhelmed. She shares that it can "get lonely on the high road," but promises that she'll never give up with a familiar phrase echoing through the chorus:

"When you go low, I go high

When you go low, I go high to get by

Sometimes I don't wanna be nice

When you go low, I go high"

If you're wondering where you've heard that before, let's harken back to July 2016. It was a simpler time, when we thought we were marching proudly toward our first female President and First Lady Michelle Obama was delivering a speech at the Democratic National Convention. The Republican Presidential nominee Donald Trump had been flinging barbs at everyone from his opponent to the media at large to the Democratic base, and many were already exhausted by the steady stream of injustices.

People had no idea how to respond to the bizarre cruelty they were seeing from the Republican nominee, and into that chaos stepped Michelle Obama. In her now-iconic speech, the First Lady gave us something to believe in, an ethos to shield ourselves with moving forward, a way to continue bringing light into the world when it feels plagued by darkness. She told a story of watching her daughters be driven away in an SUV for their first day of school after moving into the White House, and how it brought about the realization that her time in the White House and how she and Barack handled it would "make or break" their daughters. She said,

"That is what Barack and I think about every day as we try to guide and protect our girls through the challenges of this unusual life in the spotlight, how we urge them to ignore those who question their father's citizenship or faith. How we insist that the hateful language they hear from public figures on TV does not represent the true spirit of this country. How we explain that when someone is cruel or acts like a bully, you don't stoop to their level. No, our motto is, when they go low, we go high."

The convention's attendees erupted in cheers, and folks at home had the same reaction, because it was exactly what we needed to hear in that moment. And in a lot of moments since, to be honest. Things haven't exactly gotten easier on the "going high" front, so Clarkson's song has served as an important rallying cry. And that's just what she had in mind.

"When Michelle said that I was like, ‘That is the perfect idea for this song!' Everyone relates to that. No one has gone through life without relating to at some point having to take the high road."

And that includes Clarkson, too. She's had to fight her way through an absurd amount of body-shaming throughout her impressive career, and she's never let it dim her message. Earlier this year, when a troll posted a comment on a Fourth of July tweet calling the singer fat, Clarkson clapped back with a simple yet perfect response: "...and still f*cking awesome." She even added the winking-and-sticking-your-tongue-out emoji, just for good measure.

The singer has even used her going high skills on the former First Lady herself. In that same DNC speech that inspired Clarkson's song, FLOTUS had referenced the fact that the White House was built by slaves. It was an inclusion that didn't sit well with some listeners, but our girl was ready with the retort.

It was quite the mic drop, but Clarkson acknowledges that taking the high road isn't always easy. Basically, she can use the reminder as much as the rest of us, as she continues in her EW interview:

“Unlovely people do unlovely things — it’s that lesson. It’s very easy to be just as ugly or unlovely, but it’s harder to aim higher. The song is basically a one-on-one: ‘Just so you know, this is the struggle bus I’m on. This is what I go through on a daily with you around me.'"

Sounds pretty familiar, right? We all do our best, but that doesn't mean it's always easy. But, at the end of the day, if we're talking about a bus that has Kelly Clarkson and Michelle Obama on it, that's a bus we want to be aboard.

More like this
Two UK Cities Are Now In The Running To Host Eurovision 2023
By Sam Ramsden and Rachel Mantock
Self Esteem's “F*cking Wizardry” Is An Anthem About Knowing Your Worth
By El Hunt
Stormzy’s “Mel Made Me Do It” Is A Tribute To Black Talent & Success
By Catharina Cheung
At 28, Melanie C Was Falling In Love & Reclaiming Her Confidence
By Olivia-Anne Cleary
Get Even More From Bustle — Sign Up For The Newsletter