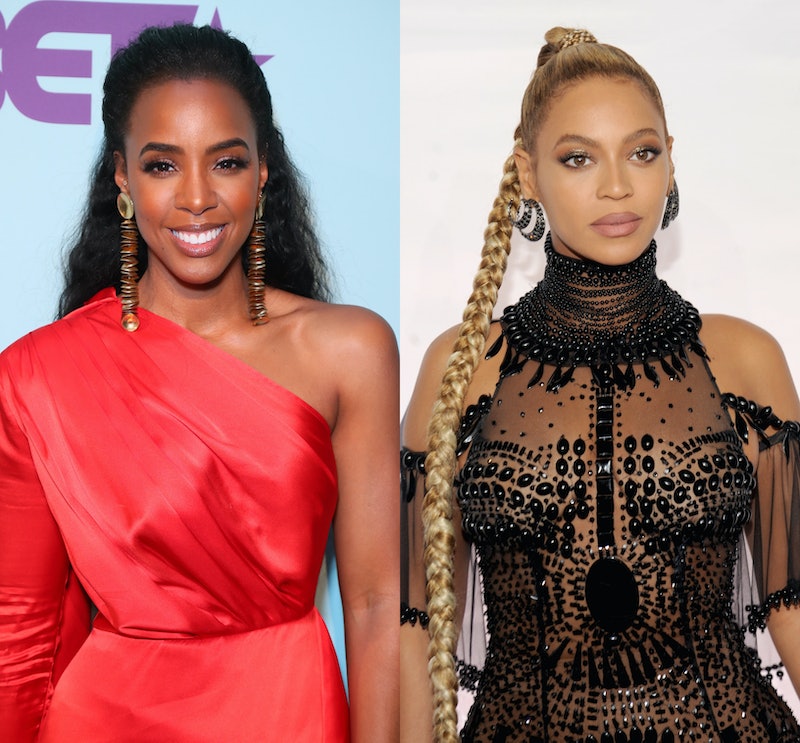 Can you imagine being in the same room as two members of one of the most legendary musical groups of all time, aka Destiny's Child? On top of that, the room you're in also contains the icon that is Janet Jackson. As wild as that hypothetical may sound, that's exactly what one lucky audience was treated to in Las Vegas on Saturday, May 25 when Beyoncé and Kelly Rowland saw Jackson's concert. The "Rhythm Nation" singer is currently performing her 15-date Metamorphosis residency.

Beyoncé and Rowland stopped by the show, per Us Weekly, to seemingly celebrate mutual friend Tracy Robbins' birthday, as documented on Rowland's Instagram Stories. Though the Voice Australia coach never showed Queen Bey on her video snippets from the night, Twitter fan account @BeyLegion posted footage of Beyoncé and Rowland dancing to one of Jackson's hits. Bey can be seen in a ponytail and fierce green, sequined miniskirt. Rowland rocked curls, a black blazer, and jeans.

Rowland posted several photos and videos from the night from pre-show birthday boomerangs to glimpses at Jackson speaking to her audience during the performance. It's clear from Rowland's Instagram Stories that she's a Jackson fan, and, the singer has actually been a major influence for Destiny's Child for years.

Rowland definitely fangirled during the show as evidenced by her Instagram Stories where she posted captions to her videos of Jackson, which included, "The ICON," "Queen!," and "...STILL HYPE AF!!" But the songstress' love for Ms. Jackson runs far deeper than her Las Vegas residency. In March 2001, Destiny's Child was one of several acts, which included *NSYNC and Macy Gray, to honor Jackson during her very own "mtvICON" special. The group performed the 1986 Jackson song "Let's Wait Awhile."

Before singing the song, each member of Destiny's Child pays tribute to Jackson by talking about her individual influence on them. "Way before we ever met her, we all loved Ms. Janet Jackson," Rowland said in the clip. Beyoncé chimed in by adding, "When I was younger, I was in a dance group. We were called, The Smooth Dancers and we were straight up Janet Jackson. We did "Rhythm Nation", we did "Escapade," we did it all. And we used to win up everything at the competitions because we learned it from Ms. Janet."

It's a sweet homage to a performer that the ladies of Destiny's Child have never stopped loving, as evidenced by their attendance at Jackson'c concert. Having their fellow DC member Michelle Williams there would have made the full-circle reunion moment complete. There are several ties between Destiny's Child and Janet Jackson, including both performing super memorable halftime performances at the Super Bowl. So, it makes sense that these legendary ladies would sneak away for a Saturday night at her concert. In fact, Beyoncé even dressed up as Jackson for Halloween in 2014, per The Hollywood Reporter.

Whether the audience showed up to see Jackson's singular dance moves or hear a favorite song, getting a bonus Destiny's Child musical moment was certainly epic, if unexpected.

More like this
20 Years Later, Kelly Clarkson & 'American Idol' Judges Reunite For Her Hollywood Walk Of Fame Star
By Radhika Menon
The Trailer For The Whitney Houston Biopic Has Twitter Feeling Heated
By Radhika Menon
Everything To Know About Taylor Swift’s 10th Studio Album, 'Midnights'
By Grace Wehniainen and Jake Viswanath
What Demi Lovato Really Thinks About Child Stardom, Depression, & Sobriety
By Radhika Menon
Get Even More From Bustle — Sign Up For The Newsletter