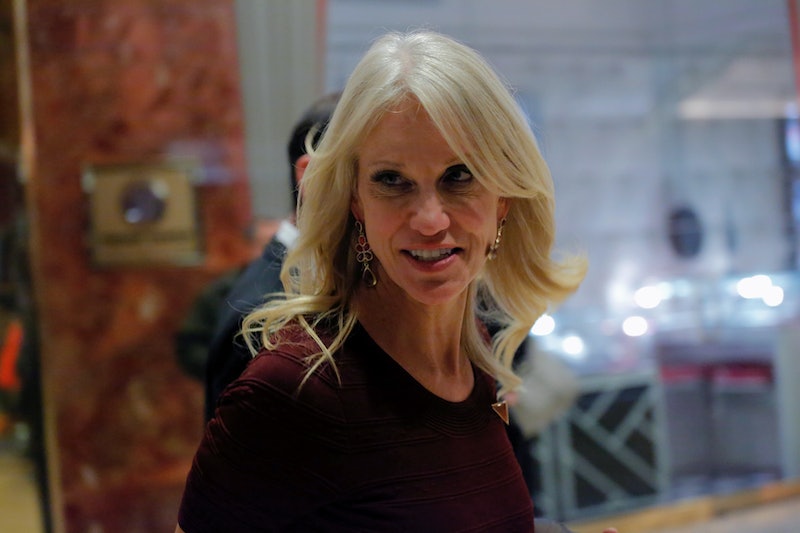 In a sentence that in any normal world would be sarcasm, Trump adviser Kellyanne Conway addressed Meryl Streep's Golden Gold speech on Fox News — "I'm concerned that somebody with a platform like Meryl Streep's is inciting people’s worst instincts," she told the hosts of Fox & Friends Monday morning. This was just the beginning of a tour of morning news shows that Conway took, attempting to defend president-elect Donald Trump, while deflecting the issues and failing to acknowledge Trump's notoriously divisive campaign rhetoric.

She added later on CNN's New Day, "Do you always want to go by what’s come out of [Trump's] mouth rather than look at what’s in his heart?" What came out of Trump's mouth is, of course, what Streep was criticizing at the Golden Globes Sunday night. That's where this all got started.

Criticizing Trump, Streep said it all without using his name. She stealthily called out his actions over the past years, and in particular pointed to the treatment of Serge Kovaleski, a disabled New York Times reporter who was ridiculed by Trump at a 2015 rally. Trump's derisive "performance" of Kovaleski's movements "stunned" Streep, and she proclaimed that while there was "nothing good about it," it was still "effective" and made the "intended audience laugh and show their teeth." The actress said this incident affected her to the point that she still has trouble believing it happened in real life. She then attested that "when the powerful use their position to bully others, we all lose."

Trump couldn't handle the criticism — suprise, suprise — so he went on to attack her on Twitter. He called Streep, who was given a lifetime achievement award Sunday, "over-rated" and a "Hillary flunky." The president-elect also denied his teasing of a disabled reporter — even though there's video evidence of the exchange. Finally he went on to attack the media, something old hat to him (and another topic of Streep's speech).

The hosts of the morning news show started the segment showing president-elect Donald Trump's response to Streep on Twitter Monday morning, then asked Conway for her reaction. Instead of addressing Trump's Twitter response, Conway went on the offensive, attacking Streep and trying to change the topic to the Facebook Live kidnapping, saying that the victim was disabled (he has mental health diagnoses of schizophrenia and ADHD) and thus Streep should have mentioned him too.

Then she went on to claim that Trump's mocking of the disabled reporter is "debunked." "She sounds like 2014," Conway added. "The election is over, she lost." Then came unity-above-all message: "I really wish she'd stood up last night and said, 'Look, I didn't like the election results, but he's our president, and we're going to support him.'" Because that's not ironic at all. Remember Trump's questioning of Obama's legitimacy via the birther movement?

As for Streep's "inciting people’s worst instincts," Conway says that's what she's doing when she doesn't call for common ground. Evidently racism, sexism, xenophobia, Islamophobia, homophobia, transphobia, etc. are not the worst in people — something that can be brought out by people in power. Instead, what's the worst to Conway? Not fully accepting and supporting the president who lost the popular vote by nearly 3 million:

[She's] inciting people's worst instincts when she won't get up there and say, "I didn't like it, but let's try to support him and see where we can find some common ground with them."

Then the conversation devolved from there into an attack on Hillary Clinton, who graciously conceded and even plans to attend Trump's Inauguration. With arguments like these, it's no wonder fake news could affect the election. Full conversations happen on cable TV without actually getting at the issues — or even giving Streep's words a fair playing. Even CNN couldn't get Conway to acknowledge Trump's teasing of that reporter.

So if you haven't already, go watch Streep's speech now. Because this Conway reaction makes no sense.