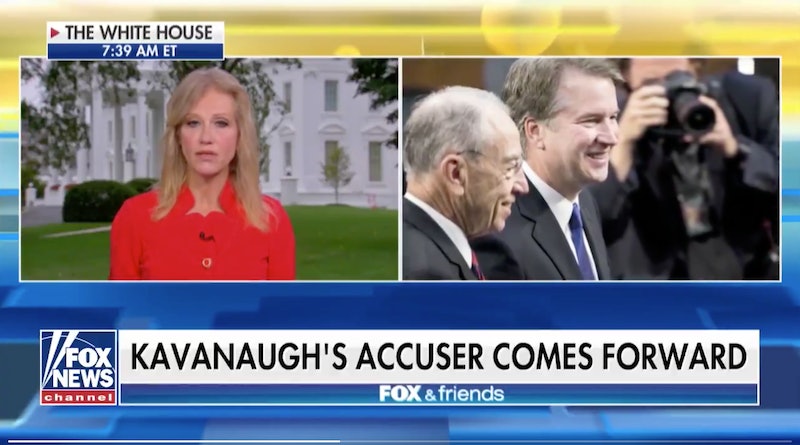 Just days before the Senate Judiciary Committee is scheduled to hold a vote on advancing Judge Brett Kavanaugh's nomination to the Supreme Court, a member of the White House inner circle has announced his accuser will be heard. Kellyanne Conway says Christine Ford should be heard — not "insulted" or "ignored" — before the committee votes. In typical Conway fashion, she also tried to reframe the argument a bit too.

Christine Ford has accused Kavanaugh, Trump's SCOTUS nominee, of attacking and sexually assaulting her while both were in high school. Kavanaugh "categorically and unequivocally" denies the allegations. "I did not do this back in high school or at any time," the nominee said in a statement on Friday.

Conway, though, says that will not stop Ford from testifying under oath. "I have spoken with the president. I have spoken with Senator Graham and others. This woman will be heard," Conway told the hosts of Fox & Friends on Monday morning. She added that the Senate Judiciary Committee would decide how and "through which forum" her testimony is given — in person or by phone.

But Conway called on the process to happen quickly. "The Senate Judiciary Committee members that I've spoken to say, 'Let that happen,'" Conway said on Fox News. "But it should not unduly delay the vote on Judge Kavanaugh."

Conway also argued that the allegations and Ford's forthcoming testimony are not necessarily something that should keep Kavanaugh off the Supreme Court. "That has to be weighed against what we already know," Conway said, "which is that Judge Kavanaugh is a man of character and integrity." She went on to list other women in his life who had come out to support him.

Conway tried to attack the Democrats, too, arguing that it was their fault that Ford's anonymity had been compromised. Democrats had not respected the "chain of trust and chain of custody" in keeping her accusations anonymous, Conway said.

Ford, a professor of clinical psychology at Palo Alto University in California, who also teaches at Stanford, originally wrote a letter to Sen. Dianne Feinstein relating her allegations. In that letter, she asked that her story remain "confidential" until the two could speak.

After reporters started approaching her and the existence of her letter was leaked by The Intercept, Ford decided that she would rather tell her own story. She gave an interview to The Washington Post with her husband that was published on Sunday. "I feel like my civic responsibility is outweighing my anguish and terror about retaliation," Ford said of her decision to come forward publicly.

As for Conway, in the Monday interview, she tried to sow doubt as to whether these allegations would take the blame if Kavanaugh is not confirmed. She noted that many Democrats had already decided to vote against the judge and "they wouldn't vote for anybody that President Trump nominated to the Supreme Court."

The White House adviser also tried to say that anything Ford has to stay would be stacked up against lots of other evidence in favor of Kavanaugh's confirmation. Conway said that in the private meetings with senators, and in written questions the nominee has answered, the topic of the sexual assault allegations had not come up.

But at the end of the day, Conway has come out in favor of Ford testifying:

She should testify under oath. The Senate Judiciary looks like they're headed that way. Judge Kavanaugh, who has categorically denied these allegations, will also have an opportunity to address them under oath. And let that be part of what everyone considers before they cast a vote.

Now it's up to the Senate Judiciary Committee to let her do so before their vote scheduled for Thursday.