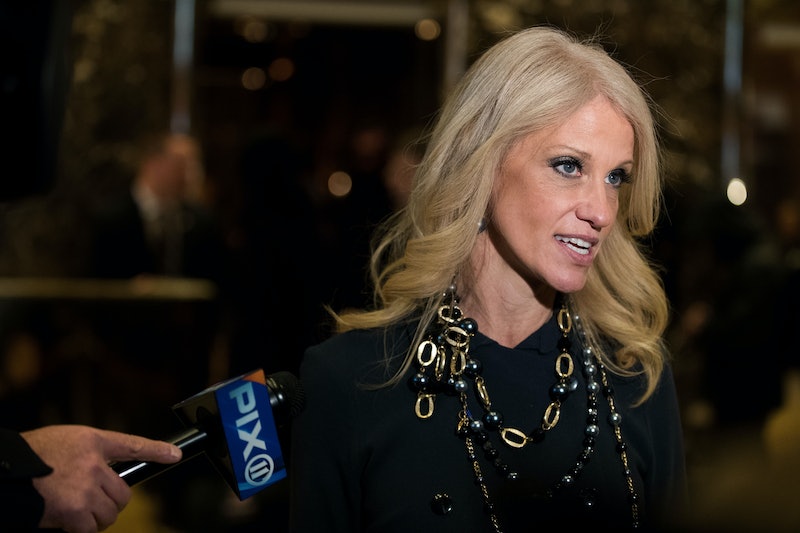 One of the people with the longest tenure in the Trump administration is senior White House counselor Kellyanne Conway, who joined Team Trump during the campaign and has been a tireless defender ever since. The country got some new information about her on Sunday during an interview on CNN, though, when Conway said that she's a victim of sexual assault herself.

Conway spoke with CNN's State of the Union anchor Jake Tapper, and the conversation largely centered around Supreme Court nominee Brett Kavanaugh and the allegations of sexual misconduct against him. Kavanaugh has denied all allegations and Bustle has reached out for additional comment.

She then went on to argue, though, that the allegations against Kavanaugh are a matter of politics and partisanship.

"I don't expect Judge Kavanaugh, or Jake Tapper, or Jeff Flake to be held responsible for that. You have to be responsible for your own conduct," she said. She then brought up current Senate Democrats' failure to remove President Bill Clinton from office after he "received oral sex in the Oval Office and then lied about it to a grand jury as president of the United States" as evidence, in her mind, of the senators' hypocrisy.

"If not one Senate Judiciary Committee member changes his or her vote because of what they learn from the FBI investigation, that tells you all you need to know about what the president and Judge Kavanaugh has said," Conway told Tapper.

"This is the first time I've ever heard you talk about something personal like that, and I'm really sorry," Tapper said to Conway.

"I've just had it," Conway said, continuing to decry the current level of partisan politics. Of the women who had come forward with sexual assault allegations, Conway said "God bless them" and that they should continue bringing their cases into court for prosecution when possible. While she initially seemed to say that survivors of sexual assault should be "responsible for [their] own conduct" — a statement which numerous commentators on Twitter picked up on — she said later in the interview that the only people responsible for sexual assault were the perpetrators.

Prior to this point, Conway has been notably reticent to bring any part of her private life into the public view. Even when The Washington Post profiled her marriage — her husband, as Twitter has noticed, is a vocal Trump critic even while Conway holds her position in the White House — Conway offered very little in terms of actual comments. Her revelation about her history with sexual assault, then, comes as a surprise to those who have followed her White House career so far. Given how ardently she has always stood by her boss, though, it will not come as a surprise that her disclosure has not affected where she stands on the issue of Kavanaugh's confirmation.