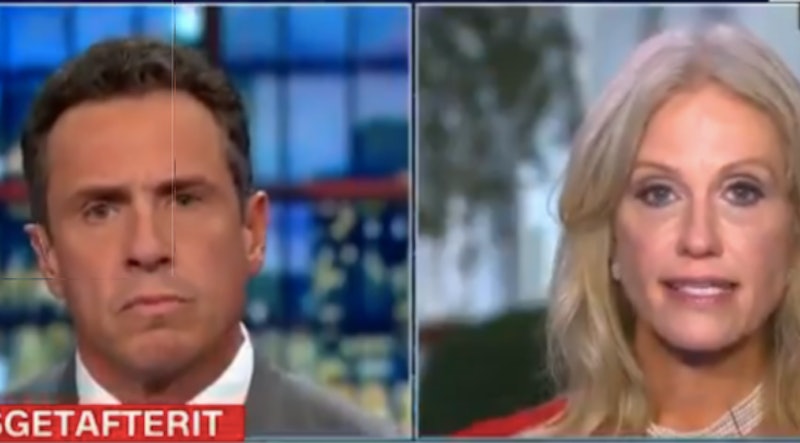 On Thursday evening during an interview with CNN's Chris Cuomo, Kellyanne Conway said the Brett Kavanaugh allegation is no longer a "he said, she said" scenario. Instead, she claimed it's now a "she said, he said he wasn't at the party" situation, leaving the CNN host visibly baffled. After a brief back-and-forth between the two, Conway accused Cuomo of supposedly leaving out an important fact about Kavanaugh's denial.

Conway said, "You omitted, cleverly, a very important fact, which is that Judge Kavanaugh said that he wasn't [at the party]. And this is no longer 'he said, she said,' it's 'she said, he said he wasn't there.'"

Cuomo immediately jumped in to ask her what the difference was between those two hypotheticals, to which Conway replied, "What do you mean, what's the difference?" She explained, "If you're going to be always looking for the facts and the truth, you can't omit important facts."

Cuomo replied, "What have I omitted?"

"I just told you," Conway said, "You omitted the fact that Judge Kavanaugh has said he wasn't there." The two proceeded to argue with increasing vitriol, with Conway threatening at one point to walk away from the interview.

Both Conway and Kavanaugh himself have given multiple statements in the last week regarding the allegations by Christine Blasey Ford. In his most recent statement via the White House on Thursday, Kavanaugh wrote, "I continue to want a hearing as soon as possible, so that I can clear my name. Since the moment I first heard this allegation, I have categorically and unequivocally denied it. I remain committed to defending my integrity."

As for Conway, she confirmed her belief that Ford had a right to be heard, and not "insulted" or "ignored," but that her testimonial also shouldn't "unduly delay the vote on Judge Kavanaugh."

In an interview with Fox News on Sept. 17, Conway said, "Let me make very clear... this woman will be heard. ... I think the Senate Judiciary Committee will decide how and in which forum."

Conway was quick to argue that Ford's allegation should be "weighed against what we already know," adding,

Judge Kavanaugh is a man of character and integrity who has been through six FBI vettings. ... He also has been lauded by women from every different aspect of his life, and this is significant. ... To be spoken about so highly by women who maybe didn't vote for President Trump, maybe don't call themselves Republicans.

During her interview with Cuomo, Conway later made another convoluted argument regarding Ford's allegation: that Ford had had 30 years to "prepare" her testimonial, and that Kavanaugh only had "24 hours" before he had to make his own statement.

Conway said, “Not only has [Ford] not been ignored, but she’s also been accommodated; we’re waiting for her to testify. She didn’t tell anybody for 30 years, she has been [thinking] about this for a long time, Judge Kavanaugh had less than 24 hours from the time he learned her name.”

Cuomo seemed shocked by the statement, and said, "They are completely different situations."