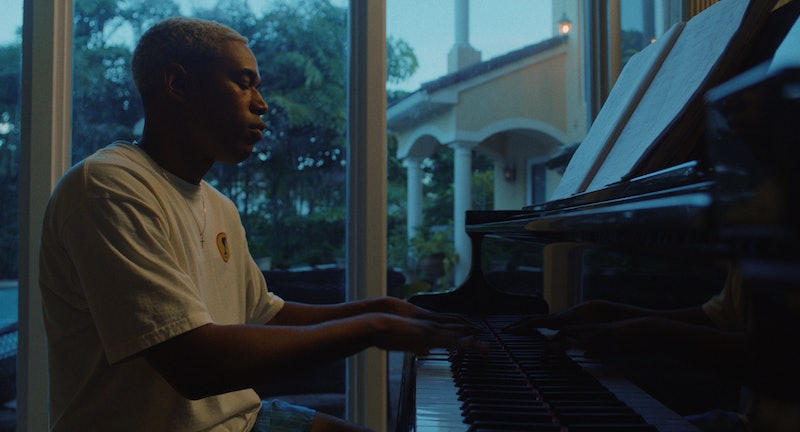 The opening scene of Waves shows a teenage couple driving down a highway in southern Florida, blasting music, and the driver, a teen boy, putting his left foot out of the window while speeding along. To them, it's a carefree moment. As a viewer, it's tense: They could crash at any moment and they don't seem to know it. Waves (out November 15) follows that driver, Tyler, a high school wrestler, as his life does start to crash when he suffers a devastating injury. Tyler is played by Kelvin Harrison Jr., who wasn't just responsible for showing the intensity of Tyler's life onscreen, but also for shaping the film's entire story along with writer-director Trey Edward Shults.

This collaboration isn't only important in that the film — at least the first half — follows Tyler's life, up close and personal as he goes through unexpected changes in his home, school, and social lives, but because it's about an African American family. And it's about them in a specific way, not in a way where a family of any race could have been inserted in their place. While Harrison is black, Shults is white; the original basis for the story was personal to the director.

"Just because [Shults] cast me, the family had to be black," Harrison tells me over the phone with a laugh. "Trey had to take the opportunity — and he's so egoless and so humble and just so willing to sit down — and try to really understand someone else's experience." According to Harrison, the director was then able to write "a proper representation of what that family looks like" based on their conversations.

Harrison had first worked with Shults, who he says is like a "big brother" to him, on the 2017 horror film It Comes at Night. It was at the end of that experience that Shults told Harrison his next film was going to be based around high school students. "I was like, 'Sick, well, if I'm still young enough, can I be in the movie?'"

The first half of the film follows Tyler as he goes from feeling on top of the world with wrestling and in his relationship with his girlfriend, to falling into dangerous patterns of medicating and drinking after a catastrophic shoulder injury. His father, Ronald (Sterling K. Brown), is overbearing, particularly when it comes to wresting. Ronald competes with his son — pushing him to work out more and more — but Tyler has been advised by his doctor to stop wrestling after his injury, something he doesn't tell his parents about, and continues to push himself and his body, as if everything was normal.

In their collaboration, it was important for Harrison and Shults to explore their own relationships with their parents, as well as people they've dated and their general experiences growing up — Harrison in New Orleans and Shults in Texas. "For eight months before we started shooting, we talked almost everyday," Harrison says. "Just trying to find these parallels that connected us both."

For his part, Shults knew of the responsibility that came with telling an "authentic" story of a black family set in present day. He told the Houston Chronicle of making the film, "I’m white so it's all about that collaboration ... [Kelvin] was the closest thing to family who's not blood that I had for an actor and collaborator. That's what made it feel OK to start from that place. It was built with trust."

Part of that collaboration and trust came in when depicting the relationship between black sons and fathers. In one particularly impactful scene, Ronald explains to his son the reason that he pushes him so hard: because being black means they have to work harder in life than their white peers. "I think that is a common theme between black fathers," Harrison says of their dynamic. "When we live in America, we're living in a country that pretty much wanted to put us down before they wanted to celebrate us as black people. I think it affects the mindset of those parents to operate differently — to raise their children differently — when you're scared they could be killed on the street any day or arrested for some small mistake being at the wrong place, wrong time." It makes sense to Harrison that this could lead to someone like Tyler to base his self-worth on how others see him "rather than you just being good with yourself."

Harrison's relationship with his own father, jazz musician and professor Kelvin Harrison Sr., also lent itself as an example of the film's theme. "I've had experiences myself with my dad being a classically trained musician and incredibly talented, but also harboring this fear if he didn't set me up properly."

At its core, the film, beyond the collaboration between Shults and Harrison, is all about communication. Tyler was scared to communicate with his family about his injury and couldn't speak in a reasonable, respectful way to his girlfriend; Ronald wasn't communicating properly with his wife and children, including Tyler's sister, Emily (Taylor Russell), who is the focus of the second half of the film. As Harrison sees it, had Tyler and Ronald been able to express themselves openly, things may have turned out differently.

"It's just having a dialogue," he says. "What's so clear here is the beauty of what Emily and Ronald have in the second half of the movie... what communication can do and how much it can bring a family together. How much love is actually there ... I think the movie is a beautiful representation of how we're all just one step away from coming back together."

It's no surprise communication is so important to him, especially now: Harrison talking to Shults — openly, emotionally, at length — is what got this story told.