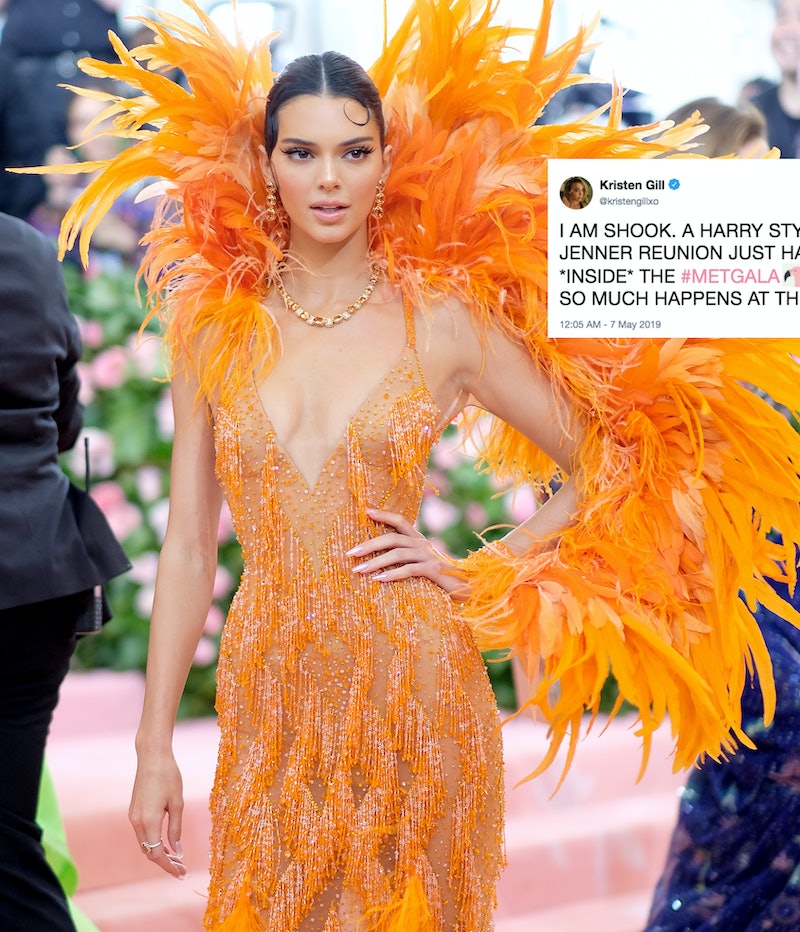 A picture says a thousand words. Furthermore, a picture of Kendall Jenner and Harry Styles at the Met Gala prompted fans to send what felt like a thousand tweets. People reacted very strongly once that photo of the former flames hit the internet. And no, they weren't caught up talking about their fashion choices.

Fans had some very intense feelings about the exes' seemingly friendly photo (which you can see here). There were some fans hoping they would rekindle the flame, pretty much ignoring the fact that Jenner is in a relationship with NBA player Ben Simmons. Others were just elated to see the two of them on good terms. However, not all the feedback was positive. Unfortunately, there were plenty who were bothered by the reunion, to say the least.

Even though the sighting incited a major response, it wasn't exactly a surprise that these two had a run-in. Considering that Jenner is a supermodel and she's attended the event multiple times, her attendance was expected. And then there's the One Direction alum, whose presence was guaranteed. Styles was a co-chair for the fundraising event, along with Lady Gaga and Serena Williams. So, at the very least, Jenner had a very clear heads-up that he would be present.

Jenner wasn't the only one aware of a possible run-in. Before it even happened, there were fans looking forward to a Met Gala reunion.

There were also several fans who could not help getting nostalgic when Styles and Jenner were spotted together.

One fan couldn't get over how "happy" the two of them looked together. It really is possible to get along beyond being cordial.

Meanwhile, someone speculated that Styles influenced the Keeping Up With the Kardashians cast member's wardrobe selection. Is orange Styles' favorite color? According to a Google search, that actually is the case. However, it's probably a coincidence that she wore it.

Another person was so invested that they had a "nightmare" that the two of them interacted beyond the photographed exchange.

However, there are some people who had pretty logical explanations for Styles and Jenner's Met Gala moment. One person emphasized that Jenner is "his friend and he respects her," which of course, is actually a great thing.

One tweeter even implored others to "grow up" and let the singer "make his own decisions and live his life."

See? There were so many strong reactions to Styles and Jenner's conversation at the Met Gala. This is because the speculation and opinions have been building up for years.

The pair has known each other for a while, and they were romantically linked on multiple occasions. In 2013, Us Weekly reported that Styles and Jenner were seen living a hotel in New York City. Two years later, People shared photos of the duo on a yacht in Anguilla, once again sparking rumors of a romance. In July 2018, Jenner enjoyed Styles' solo concert in Los Angeles, California.

Long story short, eyes have been on these two for a long time, whether they are together or separate. Pretty much anything they do garners attention, so when they're in the same room and actually interacting it's bound to invoke a fan response. Every. Single. Time.

More like this
Olivia Wilde & Harry Styles' Relationship Timeline Started With 'Don’t Worry Darling'
By Jake Viswanath
Kanye West Apologizes To Kim K "For Any Stress I Have Caused" In Rare Interview
By Jake Viswanath
20 Years Later, Kelly Clarkson & 'American Idol' Judges Reunite For Her Hollywood Walk Of Fame Star
By Radhika Menon
Here's Exactly When Rachel & Tino's Fight Happened After 'The Bachelorette'
By Grace Wehniainen
Get Even More From Bustle — Sign Up For The Newsletter