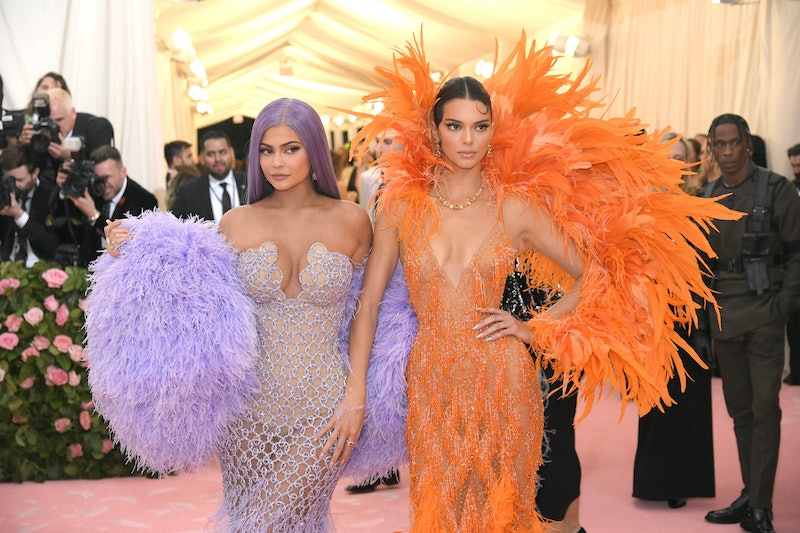 The Kardashian and Jenner clans aren't afraid of roasting one another on camera. From giving Kris Jenner a hard time about Kylie replacing Kim as the favorite to Kourtney and Kim arguing over a candy-themed party in the most recent Keeping Up With The Kardashians episodes, these ladies bare it all. Now, Kendall Jenner is imitating Kylie Jenner in the series finale of the show, and it's at once hilarious and brutal.

In a sneak peak posted by Instagram account @kyliesnapchat, Kendall is seen imitating her little sister, Kylie. According to Harper's Bazaar, the moment comes while the family is in Wyoming attempting to mend their personal relationships with one another. Part of doing so apparently entails becoming one another. In the clip, Kendall seems to have been tasked with channeling her young sister, and she does so by taking a shot at what she's most well known for, her beauty brand.

In a confessional scene, Kendall dons a long wig with pink ombre strands as well as hot pink eyeshadow in her inner corners a la one of her sister's most signature looks. That's where the fun begins. Kendall takes a red liquid lipstick from Kylie Cosmetics and begins to over line her lips in a seeming attempt to showcase the color. The result is a clown-esque mouth that even seems to have production laughing in the background.

Kendall, however, doesn't stop there. She goes on to do her own version of Kylie's famous insta-story unveilings of new Kylie Cosmetics collections. The model holds her sister's product, a liquid lip in the shade One Wish, up to the camera, naming it and placing her hand behind the lippie channeling of classic YouTube tutorials.

What's a Kylie Cosmetics reveal without swatches? Kendall then lifts her arm to the camera and exclaims, "This is what it looks like." As for the reality star's swatching abilities? Well, there's a smiley face, a heart, and multiple tick marks on her arm, so maybe she should leave that to Kylie.

Kendall isn't the only member of the Kar-Jenner family who got in on the imitation game. In the same clip, fans can see Kourtney Kardashian seemingly imitating sister Kim's Carolina Lemke sunglasses campaign. Matriarch Kris Jenner is also taking part and appears to have been given the role of Khloe Kardashian as she dons a long blonde wig and black, long sleeve top.

Clearly, all of the roasting is done is fun, but the clip certainly makes you wonder who fellow family members Kim and Khloe will be impersonating come the finale's air date on Dec. 15.