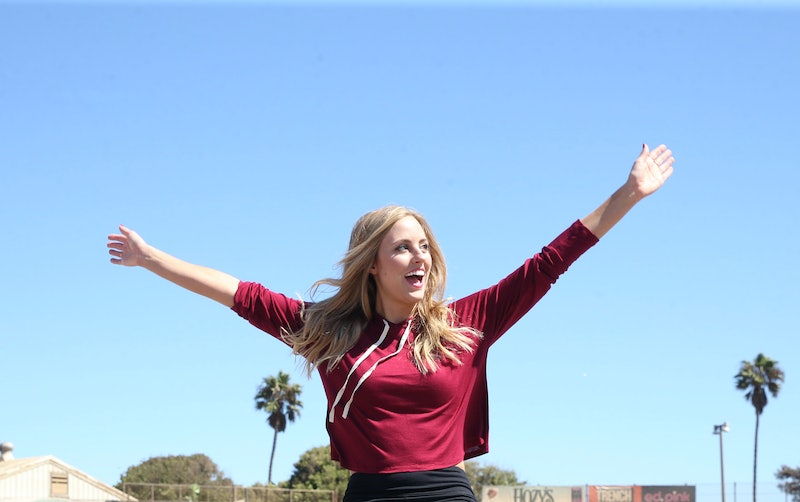 Kendall Long is the dark horse Bachelor contestant who went from being just a quirky contestant to being a serious contender to win. A few seasons ago, fans may have written off Kendall the moment she started talking about taxidermy. But more and more, The Bachelor has shown that women possess a variety of traits and complexities — you can be "weird" and also win. Yes, Kendall did talk a lot about dead animals with Arie, but she's also been a standout for her thoughtful responses to difficult situations and her desire to lead with kindness. Still, Kendall faces some major hurdles in this love story. Here are all the signs Kendall won't win The Bachelor, even if she's already won over its fans.

One of Kendall's biggest hurdles is her readiness. Arie has said time and time again that he's ready to settle down. This desire to be married and married soon has put an extraordinary pressure on the young women trying to figure out if he's the one, and if they're ready for next steps. Sure, every season pushes the final couple towards a proposal but something about Arie's desire to find a wife feels more intense. The big question mark about Kendall is her readiness versus that of the other women.

Throughout the season, the idea of "readiness" has remained a recurring question on the show. Tia Booth questioned whether Bekah Martinez was "ready" based on Bekah's age and place in life, which caused an array of conflict. Arie constantly checks in with the women about his specific desires versus theirs, even wondering if contestant Jacqueline was ready to settle down with so much school left to get her PhD. The unique thing about Kendall's own readiness conversation, is that she didn't really give him an answer and yet he still kept her around.

During the most recent rose ceremony, Arie pulled Kendall aside to discuss her feelings. She chose her words carefully when she said:

"Moving forward, like I'm not ready for this to end like at all. I just wasn't expecting to have this conversation [about being ready for an engagement.] But I see a lot in you that I see in a partner for marriage. And I can't say at this very moment I can say that I'm ready to be engaged. But I see so much in you that I do love. Me saying that I was falling for you, I wasn't saying that just to say that, like I feel that."

Kendall seems genuine in her emotions about falling love but also honest that she may not be ready in time. Previews for the upcoming episode reflect this dilemma and may be a sign she doesn't end up with Arie. Time is running out to be ready, and time has not been on Kendall and Arie's side.

It is rare that a contestant makes it this far into the show, to Fantasy Suite dates, without having received a one-on-one during the season. Corinne Olympios brought Bachelor Nick Viall home, having never gotten a solo date, but most contestants get to at least spend a day with the lead before taking him home. Former contestant Sharleen Joynt wrote about Kendall's lack of date time in her Flare recap and what this could mean for Kendall's future. Sharleen wrote:

"I just can’t get past the math: Lauren, two one-on-one dates, Paris and Tuscany. Becca, two one-on-one dates, L.A. and Tuscany. Not only does Arie simply know them each WAY better than Kendall based on all that one-on-one date [quality time], but he must’ve been more intrigued by and invested in them to have bestowed them with those dates in the first place. Meanwhile, poor Kendall has only gotten ONE date, which doesn’t even count as a date because she was pitted against Krystal on a two-on-one."

It's hard not to see Sharleen's point. On a show where time is of the essence, Kendall's lack of time with Arie may be a major sign that she won't make it to the end. It's not surprising that she's not sure about getting engaged — she's spent hardly any time with Arie, especially in comparison to her competitors.

The unfortunate thing about The Bachelor is that is a competition condensed into a short amount of time. In the real world, perhaps Kendall and Arie have more of a chance. But in the high speed world of The Bachelor, Kendall is competing with Lauren and Becca — women who have been frontrunners for a while now. Lauren has been posting cutesy photos of her and Arie, like the one above, captioning them with sweet puns like, "I’m not HORSING around...I SEA something happening here. It apPIERS to me that this BEACH likes you." And Becca has been the clear girl-next-door frontrunner since night one when she made Arie get on one knee and propose to her.

The good news for Kendall is, win or lose, she's become a favorite among the fans. If she doesn't win, she has a chance at both The Bachelorette and definitely Bachelor In Paradise. And, hopefully by then, she'll even know what she wants.