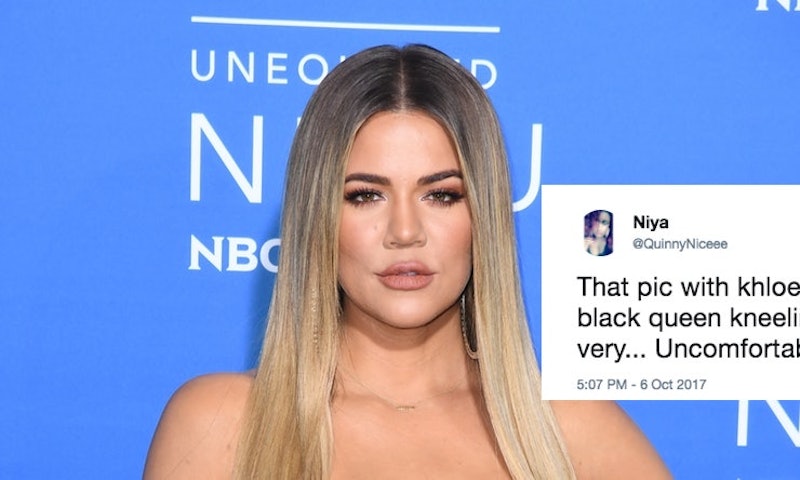 The Kardashians are always in the news, but Khloé Kardashian is making headlines for the wrong reasons on Friday. The reality star released new photos to promote her Good American clothing line, but people are calling Khloé Kardashian's Instagram post racist. Two of the photos in question feature Kardashian with model Slick Woods. In the photo that's stirring up controversy, Woods is kneeling with her hand wrapped around Kardashian's knee, as Kardashian looks down on her and touches the back of Woods' head. For some social media users, the imagery evokes that of a master-slave relationship. (Bustle reached out to Kardashian's rep for comment, as well as Woods' modeling agency, but did not receive an immediate response.)

Kardashian captioned the photos, "This chick right here is crazy, sexy, cool all rolled into one @slickwoods! Slick was so much fun to shoot with! She's a force to be reckoned with! #GoodSquad #GoodAmerican." The Good American co-creator hasn't responded to the criticism in her Instagram feed. One user commented on Kardashian's Instagram,

"Dear Khloe: you are disgusting. To think having a black woman kneel at your side is ok is beyond me. You did this knowing exactly what you were doing. Don't try to say you didn't know better. It's 2017! The year of blatant racism.. and you are in the race!"

Meanwhile, others pointed out the troubling historical connotations of seeing a black woman kneeling at a white woman's feet. "What makes it worse is the way Khloe is looking down at her," wrote another Instagram user on the same photo. "Maybe if Khloe has a different pose and facial expressions it wouldn't portray the Master and the Slave."

Since the photo went live, Kardashian has continued sharing photos on her Instagram and promoting a Nordstrom appearance on Twitter. In a tweet, she promised the event would focus on "body positivity and inclusivity in fashion." Woods hasn't commented on the photo either. The model, who has worked with Calvin Klein and Rihanna's Fenty Beauty, is known for her unique look, including her trademark shaved head.

While some social media users have argued that there's nothing wrong with the photo because Woods consented for it to be taken and used for the campaign, these users may be missing the larger point. No matter the intent, there's no getting around the troubling historical context of the pose, and the power imbalance it suggests.

Some people are calling for the photo to be taken down due to the problematic pose. Another fan wrote on the Instagram, "Y'all this is not right @khloekardashian take it down. This picture is not cool." The sentiments were echoed on Twitter.

Ultimately, it comes down to symbolism. Given the history of slavery in America, seeing a black woman kneeling at a white woman's feet is never going to be OK. Even if no one involved intended for the picture to be offensive, that doesn't change the fact that for many black women it is. As another person commented on the Instagram photo, "Body language is everything and this is not okay! Ask your photographers what type of body language do you thing this pose should imply? Because this is racist. Look up the history behind rich white women taking pics of there [sic] slave maids."

Even some of Kardashian's fans pointed out the larger issue with her post. "I love you, you've always been my favorite Kardashian but you can see how this seems a little off. I'm not gonna jump in the whole your racist bandwagon cause clearly your [sic] not, but this doesn't give your product a good look. This is borderline degrading," on fan wrote on Instagram.

While this is not the response Kardashian expected to get, it's important to pay attention to the reaction her photo with Woods received from fans and critics alike. No matter what the intentions behind the image were, it's a reminder of the power imbalance that still exists between black and white women, and the implications of the photo should be discussed.