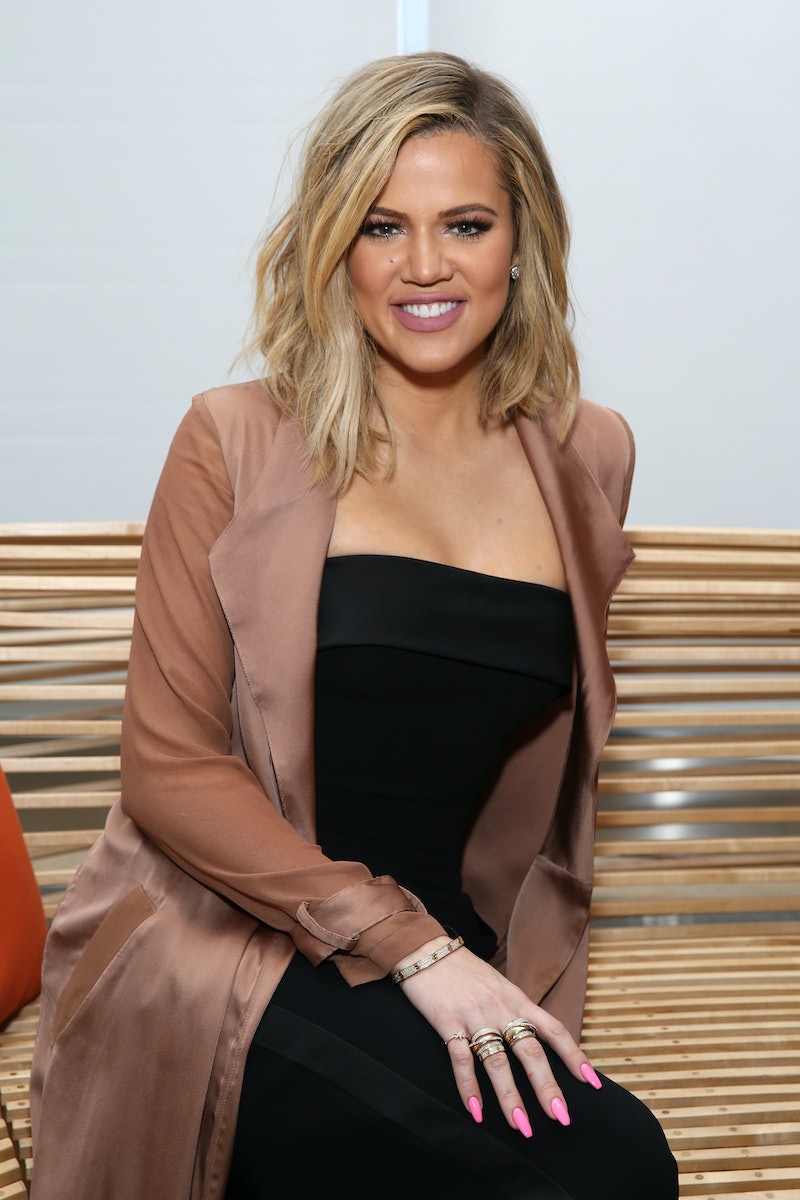 Since Khloé Kardashian has been so open sharing her personal life on Keeping Up With The Kardashians and on social media, it's easy for fans to get invested. Fans just want her to be happy, especially when it comes to her love life. Recently, Khloé Kardashian talked about dating again after her split with NBA player Tristan Thompson in an episode of the Divorce Sucks With Laura Wasser podcast. However, the reality star made clear dating isn't exactly a priority at the moment.

Kardashian was very open when she admitted, "For me, Tristan and I broke up not too long ago so it's really raw. Those emotions could be heightened at times." That's completely understandable. Complicating matters is the fact that the former couple shares a daughter, True Thompson.

The reality star explained how her daughter factors into navigating that breakup:

"True is 1 [year] and like a month old, so she doesn't even know what's happening, but to me, she does know. She feels energy and I'm a really big believer in energy. So, I do anything in my power to just not put heavy energy around her."

And that energy is very heavy, which is understandable considering the extremely public nature of Kardashian and Thompson's breakup. The reality star and the NBA player split up for good at the end of February after rumors surfaced that he hooked up with Jordyn Woods, the longtime best friend of Kardashian's youngest sister Kylie Jenner. Woods denied getting "intimate" with Thompson during a March 1 appearance on Red Table Talk with Jada Pinkett Smith. (Bustle previously reached out to reps for Kardashian, Thompson, and Woods for comment on the cheating rumors, but did not hear back.)

Nevertheless, this wasn't the first time that Thompson and Kardashian weathered a cheating scandal. In April 2018, rumors spread about Thompson cheating on Kardashian, just days before baby True was born. To say that Kardashian has "been through it" would be a major understatement — and this was just one relationship.

As fans know, Kardashian was married to Lamar Odom, a retired NBA player, from 2009 to 2016. Kardashian actually filed for divorce in 2013, but their divorce was not finalized until 2016. This was after Kardashian stepped up as his next of kin when Odom was in a coma following a near-fatal overdose in 2015.

Even after all of that, Kardashian answered "yes," when podcast host Laura Wasser asked if she would ever get married again. Kardashian explained,

"I do know as f*cked up and sh*tty it feels as you go through it, I learned from my first ex-husband that it's gonna be OK. No matter how hard it is."

For the record, Odom is her only ex-husband. Nevertheless, she had a great point. She is OK, even after all that she's been through. In fact, she's more than OK.

A lot of that can be contributed to her perspective and her insistence on remaining optimistic. Kardashian shared in the same interview, "I look at life from always a positive aspect. I would rather experience those moments that I have of greatness than to never have experienced that ever."

Even though Kardashian does what she can to be positive, she has been very realistic about her readiness to date; i.e. she is not ready — at all. At this point, Kardashian wants to do what's best for herself and her daughter and that does not include dating. She admitted, "I’m just happy. I need to filter through whatever I feel like I need to filter through. My focus right now is True."

Kardashian went on to say,

"I’m so in love True and being with her and enjoying every minute. I know that probably sounds like the typical answer, but I’m working on myself. Mind, body and soul, another cliché."

There's nothing wrong with giving a "typical" or "cliché" answer if that's how Kardashian genuinely feels. She is embodying her daughter's name and staying true to herself. She can't to much more than that.