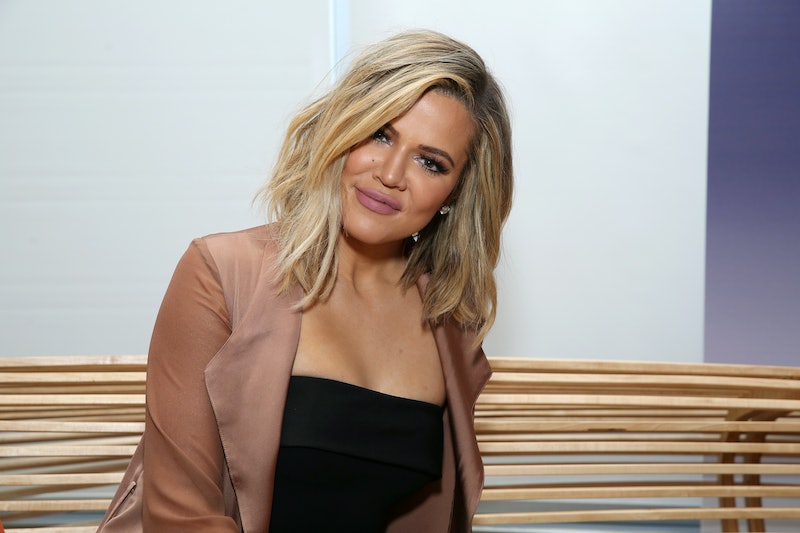 Well, she's definitely a woman of her word. After warning her followers earlier this week that she'd probably be posting an "overload" of content for the next few days, Khloé Kardashian's vacation photos are still comin' in hot. Fans should definitely be excited, though, because there's a ton of cute pics of True in her most recent batch.

So, to rewind, on May 18, Kardashian told fans via her Instagram Story, "There is going to be an overload of vacation photos over the next few days from our girls trip. So I'll apologize now 😜." Since then, she has, in fact, posted a slew of snaps from her vacay to Turks and Caicos with True, big sister Kourtney, and her BFFs, Khadijah and Malika Haqq, but they're all pretty great — no complaints here.

The first installment of photos that Kardashian posted from her trip included a few solo bikini shots, a precious pic of True in her color-coordinated beach 'fit — complete with matching bathing suit, sun glasses, and her now-signature turban — and a sweet snap of Kardashian, True, and Malika building castles in the sand.

In the second installment, though, True is the indisputable star. On May 19, Kardashian shared a shot of herself, Malika, Khadijah, and True. Khadijah is holding True up on her hip, while the 13-month-old looks up at her mom with a big ol' grin on her face. She's pointing at the camera as if she's saying something like, "Mom! Look at the camera, not me!"

In the caption of the photo, the reality star wrote, "We have created some bomb ass memories together. Keep em coming." Keep 'em coming, indeed.

That same day, Kardashian posted another photo of herself — decked out in a pretty killer hot pink bikini and a giant, floppy straw — standing with True in the water. It's a little blurry in certain spots, which makes seeing True's exact facial expression a little tough, but she still looks super cute in her tiny lil' swimsuit, nonetheless.

The third photo Kardashian shared was a solo shot of her in the aforementioned hot pink bikini. She laying out on a fold-out chair right beside the water, and it looks super chill. Like, really chill. Like, need-to-go-there-right-now chill. "Do Not Disturb Please," she wrote in the caption.

The fourth posted — see? she wasn't joking about sharing a ton of snaps — is actually a series of three pics. One was of Kardashian in that same pink bikini and giant straw hat, holding True's hand as she teeters near the edge of the water. There's another one of the same moment from a different angle, and they're both equally worthy of being framed, TBH. There's a third solo shot of Kardashian, but True appears to be MIA, so let's keep moving right along, shall we?

Kardashian saved the best for last in the final photo thus far, which she posted on May 20. It's completely devoted to True, who looks precious beyond words. The tiny fashionista-in-the-making is standing up all by herself, wearing a leopard and rose print romper, red, heart-shaped sunnies, and a matching red turban. She's got the sweetest little grin on her face, and is clearly living her best life ... at the age of 1.

OK, so, True is technically just at the beginning of her "best life," but what a way to start things off. It's unclear whether more pics of their vacay are on the way — these should hold fans over for now, though.