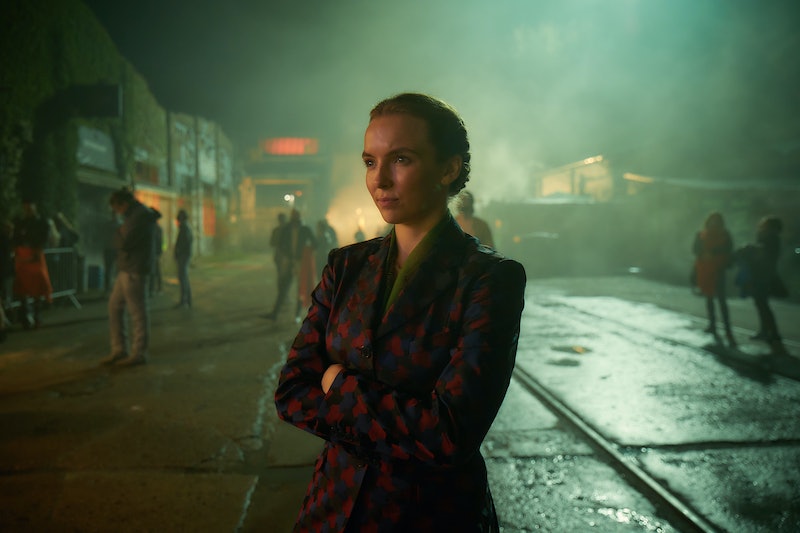 This article contains spoilers for Killing Eve Season 2. The course of love never did run smooth — especially if the people who've developed feelings for one another are on opposite sides of the law. In a recent interview with Entertainment Weekly, the Killing Eve stars teased Villanelle and Eve's relationship in Season 3 and things are not going well for the star-crossed assassin and spy. The pair have found themselves in two different countries still shell-shocked from the cliffhanger ending of Season 2, after Villanelle (Jodie Comer) shot Eve (Sandra Oh) in the back after she turned her down.

According to Oh, when Season 3 of Killing Eve premieres on April 26, her character is alive after being shot, but she's definitely not thriving. "How can you come back when you said 'no?'" Oh told EW of Eve's central conflict going forward. "How does Eve come back to any of her life?" So, she's left Rome and escaped to a mystery location, where she's working in a restaurant and leaving MI6 behind for good.

As for her relationship with Villanelle, well, "that relationship gets more complicated," Comer teased. While both actors were relatively tight-lipped about the status of Villanelle and Eve's relationship, the Emmy winner did reveal that the assassin has also turned over a new leaf in response to the showdown in Italy.

"She is trying to find her own way and be in charge and make her own rules — and she finds herself having to prove that she's ready and she's capable," Comer told EW about Villanelle's new life in Barcelona. Unfortunately, "there's a lot of chaos" that has followed Villanelle on her new journey, and that might include her former handler, Konstantin (Kim Bodnia).

While there are still many questions left for Killing Eve to answer when Season 3 premieres in April, one thing is for certain: no matter how far apart they are, Eve and Villanelle will always be drawn back together.