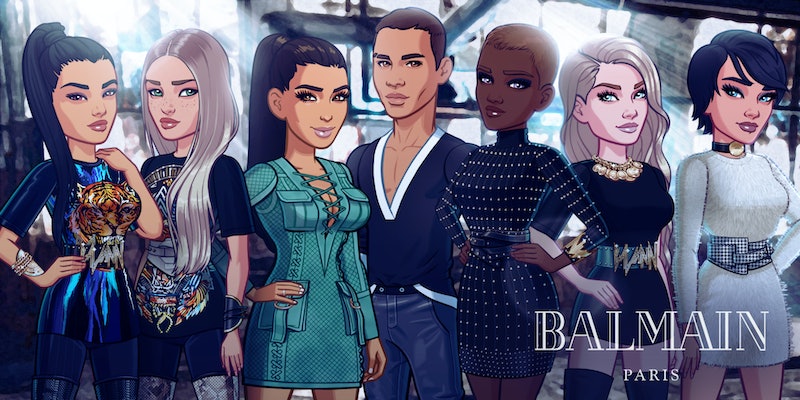 Kim Kardashian is famous for many things. Her beauty game, style, and reality show are just a few of her claims to fame. Another one, though, is a bit more unexpected. The Kim Kardashian Hollywood video game has brought Kardashian oodles of notoriety — she was even featured in Forbes for it —, and now the game has added new Balmain accessories to its already stellar fashions. After all, the game can't be authentic if it doesn't reflect Kardashian's real life fashions, right? Those styles definitely include Balmain designer — and BFF — Olivier Rousteing's work.

The fact that Balmain accessories have been added to the Kim Kardashian Hollywood game shouldn't come as a surprise to fans of Kardashian and the rest of family. The entire Kardashian clan has a close relationship with Balmain designer Olivier Rousteing with both Kardashian and younger sister Kylie Jenner wearing Balmain to the 2016 Met Gala.

Kardashian explains that she wants to keep the game fresh and and relevant to her life by including things she loves. The Balmain accessories are the way to do so. She explains, "I’m always looking for new ways to update Kim Kardashian: Hollywood with things from my real life. I love Balmain accessories and I'm so excited to offer them to players in my game."

As for Rousteing, the accessories are emblematic of Balmain's history and incredibly recognizable aesthetic. By incorporating them into the game, the house's work is experienced globally by fans. He says:

As my team and I worked on the rebirth of Balmain’s accessory collection, we turned to three distinct sources of inspiration: the house’s singular history and rich archives, the Balmain atelier’s continuing mastery of traditional couture techniques, and the immediately recognizable style that’s become synonymous with Balmain. With this being our third integration into Kim Kardashian Hollywood, it seemed only fitting to showcase our accessory collection, which is the genesis of these three influences. By incorporating the Balmain accessory collection there, we are able to allow fans to engage with the accessories on a global level.

While this may not be the first time that Balmain's fashions have been added to the game, the latest additions are the first time accessories from the brand will make an appearance. Fans are sure to be excited. After all, part of the appeal of Kim Kardashian Hollywood is the ability to virtually experience life like Kardashian, and there's no better way to do so than in Balmain.

More like this
These Are The Best Socks A Woman Can Buy
By Lisa Fogarty
Dua Lipa’s Tiny Sparkly Green Bikini Top Is Giving Grown-Up Tinker Bell
By Catharina Cheung
How To Wear A Bucket Hat Like Rihanna, Dua Lipa, & More
By Allie Fasanella
Harry Styles’ Red Carpet Looks Have One Thing In Common
By El Hunt
Get Even More From Bustle — Sign Up For The Newsletter