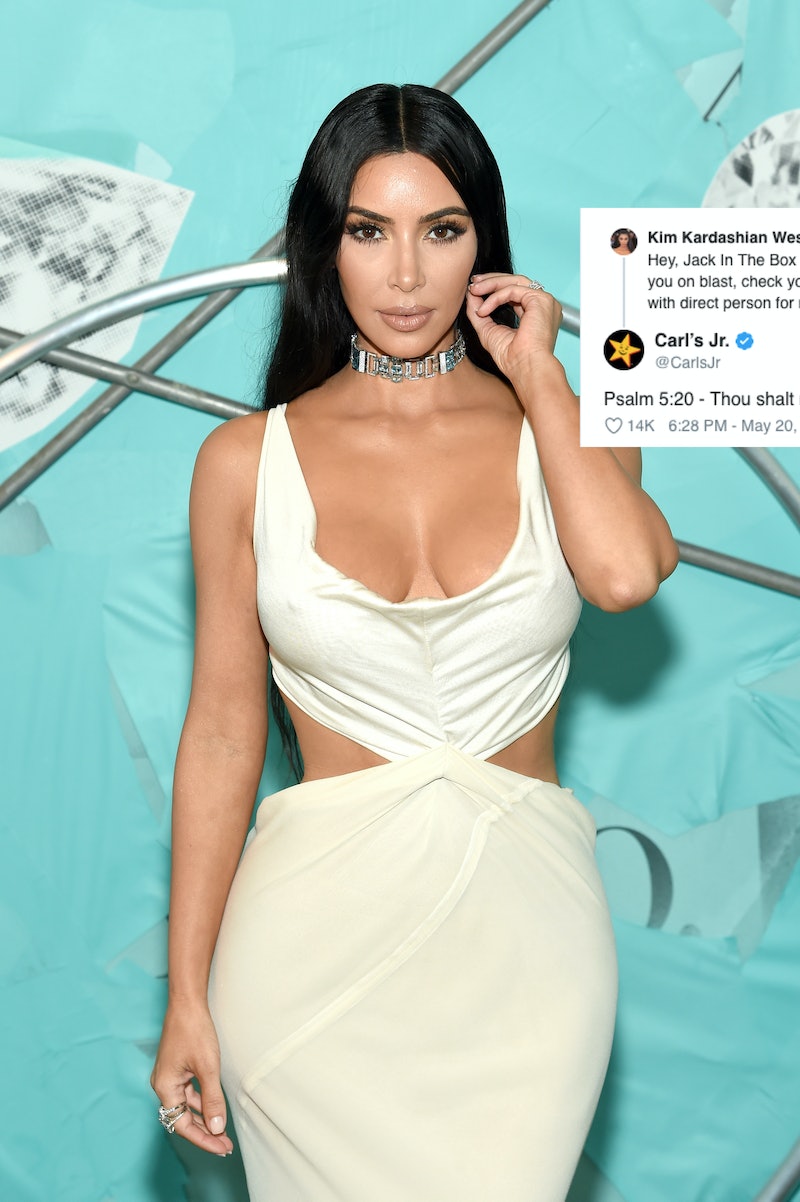 Are fast-food chains the new beauty bloggers when it comes to throwing shade online? Not quite, but Burger King, Wendy, Shake Shack, and Hooters sounded off on the exchange between Jack in the Box and the reality TV star.

It all started when the mother-of-four tweeted,

"Hey, Jack In The Box I have a serious complaint but I won’t fully put you on blast, check your corporate email inbox or send me a DM with direct person for my team to contact. Pronto!"

About an hour later, Kardashian followed up with a clarification tweet. She posted, "I would like to add that this is not about me or a wrong order. Nobody recognized me and it’s something that I observed that affected other customers at this particular location that was concerning."

Kardashian didn't share her specific issue with the public or tag the franchise in any of her tweets, but she is Kim Kardashian. Of course, her posts garnered some attention. Later that night, Jack in The Box responded to Kardashian with some reassurances that the problem(s) will be addressed.

Kardashian thanked Jack in the Box for replying, but what did they talk about? That is what inquiring minds want to know (as embarrassing as that may be to admit). How else can we keep up with Kardashian?

Even though Jack in the Box is back in Kardashian's good graces, that didn't stop other food chains from joking about the Twitter exchange.

Carl's Jr. really came through with their tweet. The restaurant even incorporated the name of Kardashian and Kanye West's youngest son Psalm into the response. Very current and clever.

If only there was a reference to Kardashian's 2010 Carl's Jr. ad. Then again, the company's CEO did poke fun at Kardashian in by saying that she "wasn't good at eating the burger," before eventually apologizing for the remark in 2015.

Whoever operates the Wendy's Twitter account was pretty shady with their reply too. Kardashian and Jack in the Box may have resolved their issues, but the Keeping Up With The Kardashians star is also a longtime fan of Wendy's. In 2012, Kardashian shared a photo of herself snacking on Wendy's during a flight on a private jet.

Burger King shared a whopper of a reply, even putting Jack in the Box on blast with a megaphone emoji.

For the record, Kardashian has had nothing but love for BK in the past. In 2017, Kardashian admitted that a Burger King anti-bulling PSA made her cry.

Shake Shack didn't share any words about Kardashian's Jack in the Box struggle. Still, those eyeball emojis indicate that someone at Shake Shack couldn't help keeping an eye on the Twitter exchange. Side eye, perhaps?

Even Hooters weighed in on the tweets. It might not a "good day to be Jack," but all publicity is good publicity. Right?

Even if Kardashian never reveals her specific issue with Jack in the Box, at least the problem was resolved and lots of tweeters managed to capitalize on the incident with some quality posts.